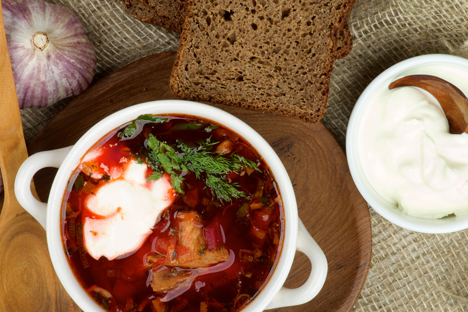 Borscht is an immortal classic, a symbol, and the face of Russian cuisine.Source: FotoImedia

Soups from beer and vodka, black caviar and mare's milk – what are Russia's traditionally exotic dishes?

The earliest mentions of Russia's national cuisine date back to the 10thcentury – in the writings of Arabic historian, astronomer and geographer Ahmad Ibn-Rustah. The Eastern Slavs, according to Ibn-Rustah, subsisted entirely on mare's milk.

At the height of the Cold War, a well-known European food magazine suggested that the Russian cold soup okroshka was made from a blend of beer and vodka, while Russian borsch was habitually brought to the table in fetid condition.

The Iron Curtain collapsed to show the world a different picture of pseudo-Russian food – mountains of black caviar, without which nary a Russian-style lunch was ever munched.

Russian chefs who went to Europe or America made no attempt to show authentic Russian dishes -- but instead whipped up the food foreigners expected from the scanty knowledge of that distant country they'd gained while watching Omar Sharif as Doctor Zhivago.

Russia's fierce climate makes agriculture unviable for a large portion of the year. However, Russia has never been short of woodlands. Deciduous woods in the warmer areas, and evergreen taiga coniferous forests provided sufficient firewood to keep up a roaring glow in that most universal item of Russian kitchen appliances – the Russian stove.

If forced to describe a Russian brick stove in modern technical terms, then it's sadly inefficient – not more than 30 percent of the fuel is converted to usable heat. The chimney-space inside is large enough that a grown adult can clamber in and even have a wash there if needed.

To get the temperature in this cavernous stove up to bread-baking heat, at least a dozen sizeable logs are needed – most of a smallish tree. However, once the stove is heated it can bake a number of dishes that need long cooking, and bake enough bread and pies to feed a big family.

The dishes were left to cool in the stove, which might retain its heat for up to 8-12 hours afterwards – and this way of cooking helped create a distinctive kind of national cuisine.

These are the dishes that benefit most from an extended stewing – extended cooking for several hours at temperatures from 200°C to 80°C.

View the video: Borscht, the most well-know beetroot soup

Such dishes have been the beloved fare of Russians for centuries – amongst the popular favorites with Russian families both then and now being different kinds of shchi – cabbage soups, and all sorts of different porridges.

A typical hearty lunch in a peasant family would traditionally have included one tureen of long-stewed cabbage soup, and another of boiled, crumbly porridge – of either buckwheat, wheat, millet or rye.

Russian vegetables and mushrooms are traditionally salted with the help of natural lactic acid fermentation, and are usually called kvashennie, or sour – a major branch of Russian cuisine.

The brine from pickled cucumbers and cabbage once played the same role in Russian cooking that soy sauce has today in the countries of Southeast Asia.

There are also special so-called pickle foods that are made from these pickles, as well as cabbage soups – they include solyanka, rassolnik and kalya soups.

The medieval German traveler and author, Adam Olearius, who traveled across Moscovia, mentioned dishes such as roast mutton in cucumber pickle as an effective pick-me-up after excessive boozing.

No list of Russia's favorite foods would be complete without mentioning river fish of every kind – which were always in plentiful supply.

Domostroy, or Good Husbandry – a 17th century manual of household management – mentions more than a dozen different ways to salt fish – including air-dried, salt-barreled, layered, and many more.

And well, yes, there's the famous Russian black caviar too – the caviar which nowadays we've almost lost. Yet just some four years ago there were outlying Russian provinces who were using dried, crushed and powdered caviar as a substitute for flour during an outbreak of famine – because it was the cheapest substitute.

The pies made with fish fillings are really only known in Russia – coulibiac, fish pasties, and rasstegai, open-top brioches.

Pies, and other pastry goods are the calling card of the Russian kitchen. No number could be put upon the variety of stuffings, the assortment of pastry doughs, or the panoply of pies themselves. Open pies, sealed-top pies, crimped, curd-cheese tartlets, sweet pies or sour pies, dessert pies or savory pies.

The Shrovetide (Maslennitsa) holiday – Russia's own carnival festivities that precede the Lenten Fast – is inextricably linked with offering pancakes to guests.

Yet they cook pancakes at other times of the year too. Christmas is followed by a festive season, also known as Oatcake Days – since they cook special oat pancakes made from oat flour.

Other holiday dishes are prepared just once a year, and served on that holiday alone – such as the Easter Kulich sponge cake, and the pascha, a decorated mound of sweetened curd-cheese made for Easter Day.

There are sweet pastries called Spring Larks, and rye ladders made for the Feast of St. John Of The Blessed Ladder, or the roast Roe deer served on Christmas Eve near Arkhangelsk.

Of course, we can't leave out mention of the many different kinds of cold soups, such as okroshka and botvinie, which are made using kvas – the famous non-alcoholic beer fermented from brown bread.

Where to try authentic Russian fare

Russia is a multi-ethnic country, and Russian national cookery has sat happily alongside the cuisines of other ethnic groups for centuries.

Many dishes which are thought of as being Russian today have crept into the Russian repertoire of dishes from other neighbors, such as Finno-Ugric pelmeni, a dish similar to ravioli, or Turkic noodles.

In just the same way, the cooking of other peoples who live in Russia has been augmented at the expense of authentic Russian dishes.

Regrettably it's actually quite difficult to track down authentic Russian cuisine on restaurant menus.

What you often get instead is an imitation – very possibly a tasty imitation, but still quite a long way from being the real thing.

There are, however, a few worthy exceptions of note. For example, in the historic center of St. Petersburg, you can find authentic Russian dishes on the menu of Russkaya Rumochnaya № 1 (Russian Vodka-Bar № 1).

Even so, the situation is getting better. Restaurants in the Russian provinces are installing traditional Russian stoves again, with young chefs more interested in serving authentic dishes than dazzling the clients with the richness of the food.

Farmers are beginning to grow nearly forgotten dishes like spelt and turnips – and if prepared by skilled hands, these traditional Russian ingredients can be found in well-known Moscow locations such as the LavkaLavka Cafe.