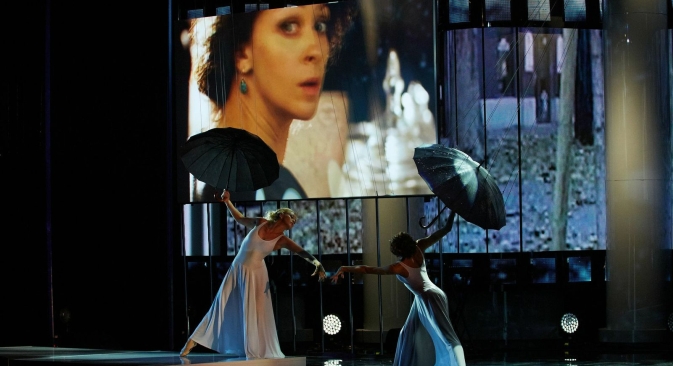 One of the oldest film festivals around the world marks its 35th anniversary this year. Source: PressPhoto

The 35th Moscow International Film Festival has come to an end. Over the eight days of the festival, 72,000 film fans packed its screenings, according to the film festival president, Nikita Mikhalkov. In total, 364 films were shown from 48 countries. The Festival Competition Shortlist numbered 16 movies, of which three were Russian.

The Golden St. George – the festival’s top prize – was awarded to Turkish film-maker Erdem Tepegöz for his film “Zerre” (“Particle”). The film tells the story of a jobless Istanbul woman, forced to agree to any kind of work that will feed her sick daughter and elderly mother. Hunger and desperation drive her into selling one of her kidneys.

The film is shot with such a delicate balance between refined direction and authentic observation that it won festival-goers’ hearts. The actress in the pivotal role, Jale Arikan, plays a woman heading for a nervous breakdown – with an accurately minimal portrayal of feeling, alongside turbulent inner passion – and carried off the Silver St. George for Best Female Role.

Two more “Silver Georges” went to Asia, for Best Director and Jury Special Prize. The jury awarded Korean director Jung Young-Heon the Best Director prize for his tender psycho-thriller “Lebanon Emotion” – a film about how the illogical behavior of primarily good people produce a joyful view of the world.

The Special Jury Prize went to Japanese director Tatsushi Omori for “The Ravine of Goodbye” – another psychological thriller, which was both more sophisticated and more moody.

The jury singled out young Russian actor Alexey Shevchenkov in the Best Male Role category – the lead performer in a film titled “Judas” and based on the early 20th-century novel by Leonid Andreyev.

Among the festival’s other memorable movies, attention is due to a masterpiece by Kira Muratova called “Eternal Homecoming.” The title is a nod to the Nietzschean concept that all that ever was and ever shall be is now: There’s nothing new under the sun.

With her characteristic misanthropic tenderness, Muratova depicts the love of one man for two different women. We see several couples – of different ages, characters and occupations – all confronting the audience with the same scenario, in which a man meets up with a former classmate and, even from the doorway, begins to smother her in his mountains of doubts. Whom should he choose if he loves them both?

Toward the end of the film, it turns out that all these scenes are just screen-tests that the film’s producer is showing to a potential sponsor. On-screen suffering is just a route to getting out the hankies – and the cash.

If Muratova’s hero never reaches a decision, then the main character in Konstantin Lopushansky’s film “The Role” commits himself once and forever. An actor who has fled the Russian Revolution decides that he will play the last role of his life: He returns to Moscow claiming to have survived the horrors of the Civil War as legendary Red Army commander Ignat Plotnikov.

Maksim Sukhanov, whose presence in any movie can raise it to Shakespearean heights, plays three roles simultaneously – the actor, the Red Army commander and the fake commander.

The best Stalin, Lenin and Rasputin performed by foreign stars

Infused with the spirit of symbolism of the early 20th century, the hero’s search for nature and the essence of creativity leads him to the inevitable conclusion – to be “done to death.” In a way, the film can be viewed as a huge interpretation of these verses of the poet Boris Pasternak: “When passion high dictates the lines / It sends a slave out on the stage / And then, as art comes to an end / We feel the breath of soil and fate.”

There is a different search at the heart of another Russian film that was in prize-contention – “Slide,” from debut film-maker Anton Rozenberg. A drug-squad cop is submerged in dubious machinations with the crooks, when he discovers a peculiar thing: It is hard to shoot a pregnant woman, even after she has dished the dirt on her whole criminal gang.

The film is shot in a clip style, which has something that is harder and harder to find in the work of young directors – its own meaningful movie language. It may be unmelodious and frequently cynical, but this first-time movie clearly attempts to give a view of the world that is all its own and not stolen from elsewhere or based on allusions.

Two other films from the festival are worth catching –The Polish film “Traffic Department” by Wojciech Smarzowski, and Yuri Bykov’s Russian film “The Major.” Both films have cops at the center of their stories.

One may wonder whether it is possible, having become a part of the system, to try to break away from it of one’s own free will, remembering that there is a deep-rooted striving for justice in all of us. It is a controversial issue, but there is an effort to make every movie-goer believe that evil has to be resisted not in dreams alone.

The central character of the festival’s most touching and poetic film, “Matterhorn,” from Dutch director Diederik Ebbinge, is a modest citizen of a tiny town, in which the only way to pass the time is chatting to the pastor about sinfulness.

His unexpected rebellion against himself – narrow-minded, grey and conventional – begins with his bizarre friendship with a local nut and his obsessive dream to get married to our hero. The local church community is appalled when our hero leads the lunatic to the altar, flouting every possible fear and convention.

In sum, the people who woke up to reality, ready to break every rule in the book and push free will to the limits, came out as the winners of the Moscow Film Festival.