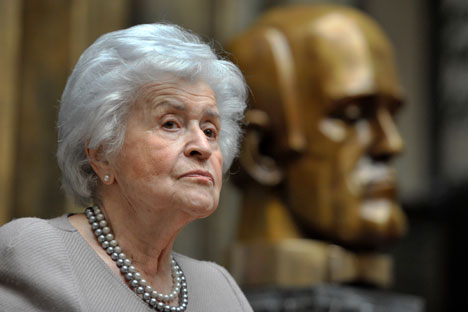 In 2012, the Pushkin State Museum of Fine Arts celebrated its centenary; a new concept for the development of the museum was approved, and the decision was made to build a museum campus. Source: Sergei Kuznetsov / RIA Novosti

Irina Antonova, who has run the Pushkin State Museum for more than 50 years now, has been replaced by Marina Loshak as the director.

Irina Antonova, who has run the Pushkin State Museum of Fine Arts for 52 years, has been appointed president of the museum—a position created especially for her. Russian Culture Minister Vladimir Medinsky has been quoted as saying: “We are boundlessly thankful to her and ask her to continue working as the museum’s president.”

Marina Loshak, an art historian and curator, has been appointed the new director of the Pushkin Museum. Over the last year, she headed the Stolitsa Museum and Exhibition Association, which includes Moscow Manege, New Manege, Worker and Kolkhoz Woman exhibition center, and other museums.

Irina Antonova started working for the Pushkin State Museum of Fine Arts in 1945; she was appointed director in 1961. She graduated from Moscow State University, specializing in the Italian Renaissance.

Antonova is a Fellow of the Russian Education Academy and of the Russian Academy of Arts, a full Cavalier of the Order for Merit of the Fatherland, a recipient of many other awards and prizes, and author of more than 100 publications. Since 2013, she has been the chief curator of Russian state museums.

Under her guidance, the State Museum of Fine Arts, together with leading museums of the world, held major projects that gathered unprecedented audiences.

The 1981 “Moscow-Paris” exhibition featured works by Matisse, Picasso, Malevich, Kandinsky, Filonov and Chagall, making it possible to trace the influence of French and Russian fine arts and their divergence.

The “Moscow-Berlin/Berlin-Moscow. 1900–1950” exhibition of 1996 displayed the historic clash between the two countries via painting, architecture, music and the life stories of their creators.

The audience was shocked by the similarity of the ideologies and aesthetics of the Stalin regime and fascism.

“Russia-Italy. From Giotto to Malevich” (2005) focused on the impact that the cultures of the two countries have had on the world.

Queues were impossibly long throughout the exhibitions of works by Modigliani (2007), Picasso (2011), Dalí (2011) and Turner (2012). The museum is currently featuring “Pre-Raphaelites: Victorian Avant-garde” and “Titian. From Italian Museums.”

The Pushkin State Museum of Fine Arts has around 1 million visitors a year. Its collection consists of more than 560,000 items — paintings and graphics, sculptures, applied arts, archaeological exhibits and coins.

Originally established as an educational and public collection of replicas of classical artworks, the museum became one of the world’s largest museums during the 1930s.

The museum received West European artworks from nationalized private collections, and some pieces were transferred from the Tretyakov State Gallery and Leningrad museums.

In 1948, most important paintings were added from the disbanded State Museum of New Western Art, based on the Sergei Shchukin and Ivan Morozov collections.

The original collection of the State Museum of New Western Art was split between the Pushkin Museum and the Hermitage, which saved many of the masterpieces from destruction or sale to foreign collectors.

The public only saw these paintings as late as 1974; at about the same time, Moscow began displaying items from Western collections, in exchange for works of art from the Pushkin Museum.

Antonova’s idea of reviving the Museum of New Western Art and restoring its collection by returning to it the works of impressionists and post-impressionists currently on display in the Hermitage was voiced during a conference call with President Putin. The director of the Hermitage, Mikhail Piotrovsky, said transfer of the art was impossible.

Following a heated debate in the museum community and in the media, the Culture Ministry decided not to remove the collection from the Hermitage, in order to avoid setting a precedent of splitting up museum collections.

Another open issue is the future of the works of art captured in the countries occupied by Germany during World War II — works that are currently stored in the Pushkin Museum but not available even to art specialists.

In 2012, the Pushkin State Museum of Fine Arts celebrated its centenary; a new concept for the development of the museum was approved, and the decision was made to build a museum campus.

The reconstruction, proposed by Norman Foster back in 2007, will quadruple the exhibition area and establish an open vault, into which visitors will be allowed.

Marina Loshak is the gallery director and curator who supervised creation of the collections of SBS-Agro Bank. She is the art director and co-owner of the Proun gallery at Winzavod.

Since being appointed director of the Stolitsa Museum and Exhibition Association, Marina Loshak has been working on turning Moscow’s largest exhibition center into an art territory.

In 2012–2013, the Manege hosted the exhibitions “Everything’s For Sale — the History of Russian Posters,” “Soviet Neorealism,” “Feminism. From Avant-garde to our Days,” “My Most Important Suitcase,” “The Crossing Lines” by the Japanese artist Chiharu Shiota, light installation “The Terrestrial Echo of Solar Storms” by Charles Sandison, installations by Irina Korina, АЕS+F. The Manege also features a museum of screen culture and displays of a book museum.