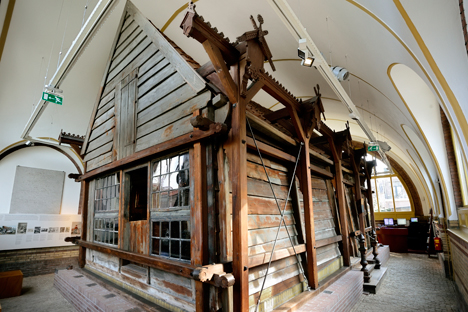 On the way to Amsterdam, Peter the Great stopped in Zaandam, where there were a considerable number of shipyards. The czar spent eight days there, living in a wooden house and working as a common craftsman. Source: Press Photo

There is a new exhibition in the Zaans Museum, in the city of Zaandam (only 10.5 miles from Amsterdam): “Eight Fabulous Days,” devoted to Russian Czar Peter the Great's stay in the city and on display for the duration of the 2013 Russia-Netherlands Year.

Every Russian schoolchild knows that Peter the Great (1672–1725) traveled to Europe in order to learn shipbuilding and other trades. Wanting to reform the Russian state based on the European model, the czar organized his “Grand Embassy” project all over Europe in 1697–1698. He even traveled under the guise of a constable (“Pyotr Mikhailov from Preobrazhesnky Regiment”), worked in shipyards and workshops, and, understanding the importance of a naval fleet in Russia's future, paid particular attention to shipbuilding.

On the way to Amsterdam, the czar stopped in Zaandam, where there were a considerable number of shipyards. The czar spent eight days there, living in a wooden house and working as a common craftsman. The house has been preserved and transformed into a small museum—The Czar Peter House. Having set out for Amsterdam, Peter had fallen in love with Zaandam.

In 1703, he founded St. Petersburg and its many channels on the Neva River, which must have reminded him of his favorite Dutch city.

At the “Eight Fabulous Days” exhibition, one is immediately drawn to the assortment of 18th-century tools: plenty of wood and rigging. The exhibition's curator, Ellen van Veen, says: “At the heart of the exhibition lie three main ideas. First, we wanted to show that this story dates back to the 18th century; although Czar Peter the Great first came here in 1697, societal development had already met the standards of a new century."

"Second, we wanted to present this history from the point of view of local residents—‘Zaandammer,’ common working people. And third, we wanted to show that the Russian czar really lived in a wooden house, and, during his stay in our city, learned 14 trades,” the curator added.

Visitors at the time were coming from a variety of countries to witness the development of industry in contemporary Zaandam; foreigners were nothing out of the ordinary to the Zaandammer. Still, the news that the Russian czar had visited their city quickly flew across the region.

To this day, the story excites the imagination of Zaandammer and is a gem among urban legends. Zaandam resident Fred Irenberger says, “I came here because I find this era and historical personality fascinating. The man was astonishing.”

“I found out about the exhibition from a local newspaper and decided to come down here with some friends. The Russian czar's stay here is a part of our history, and almost everyone here knows about it,” says Debora Bosman, who lives near the museum.

Standing in the Zaans Museum's exhibition hall, visitors feel as if they were in the royal chambers. Visitors can even press their hands to Peter the Great's handprint or mark off their height with a pencil on a wall, the top of which reads “6.7 ft.” The czar's mark has yet to be surpassed by a visitor's.

The exhibition will remain open until January 5, 2014. For more information visit website of Zaans museum.