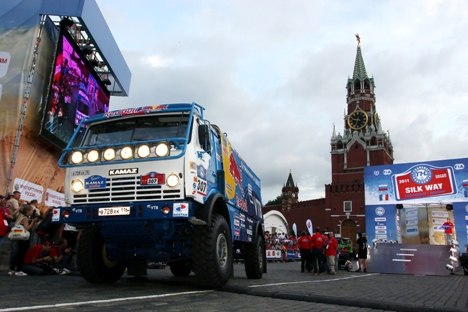 The route of the Silk Way Rally, as per tradition, runs south from Moscow and, this year, passes through Volgograd toward Astrakhan. Source: ITAR-TASS

The off-road motor race has the reputation of being one of the most prestigious in the sport, alongside the legendary Dakar Rally.

The Silk Way, starting on Moscow’s Red Square on July 5th, is one of the most interesting sporting projects to originate in Russia recently. The race, which first took place in 2009, has already earned the reputation of being one of the most prestigious in the sport—alongside the legendary Dakar Rally — and continues to develop itself.

When it became known at the beginning of 2009 that the Fédération Internationale de l'Automobile had included a rally called the Silk Way in its official calendar, it seems that many thought it would be a massive, once-in-a-lifetime event. This is because memories of Russia’s previous attempts to secure a spot in this genre were still fresh.

There had been several attempts made since the mid-1990s. At the end of the 1990s and the beginning of 2000s, the route of the Master-Rally ran through the territory of Russia and the surrounding countries. Then there was the launch of the Transorientale Rally, beginning in St. Petersburg and ending in Beijing. In the end, however, these races were not a proper match for the Dakar Rally, and their lifespan was quite short.

The Silk Way, now celebrating its fifth anniversary, appears to be here for good.

It seems that only those who knew the person launching this project (Semen Yakubov) were absolutely sure that the rally had a future. Semen Yakubov continues to lead the board of directors to this present day.  It is Yakubov who is the author of Russia's breakthrough into motor sports. He was the one who lobbied in the 1980s to have KamAZ create a professional team and participate in the Dakar Rally.

Yakubov himself chased after KamAZ-Master for a long time, combining the roles of “stable” chief and navigator. He was impeccable in all his roles. With him, KamAZ secured its spot among the elite in the 1990s, later won at the Dakar Rally, and then proceeded to win title after title. There is no other team in the “heavy vehicles” category with as many titles. In fact, it is hard to imagine that the KamAZ record will ever be beaten.

Now, KamAZ drivers are racing not only along the South American lowlands but also along the Russian off-road. It is generally senseless to compare these two races—the Dakar and the Silk Way—as the format is different. The South American marathon runs for three weeks, while the Russian one, with a much shorter distance, lasts just one week.

Nevertheless, the two races have been held up against each other quite often lately. Yakubov noted with pride that foreign colleagues are already calling the Silk Way “the second Dakar.” The Russian rally is being televised by the largest sports channel, Eurosport, with an audience of more than 100 million people from nearly 200 countries.

The route of the Silk Way Rally, as per tradition, runs south from Moscow and, this year, passes through Volgograd toward Astrakhan. The route has been updated nearly 70 percent, in comparison to last year. The main aim of the changes has been to make the path more complex. This year, the unofficial motto of the rally is "A return to old African traditions." This means a return to what rallies were at the beginning—crossing desserts and sands.

Thus, right after the start in Moscow, the participants of the Silk Way will make for the south, away from the rains and other surprises of Russia's midlands. “Rally drivers don’t like wet routes. Plus, you can’t see the advertisements on the cars if they’re dirty, which the sponsors really don’t like,” says Eric Khayrullin, who serves as the media director of the Silk Way and the press officer of the KamAZ-Master team.

The Silk Way-2013 route has circular sections in Volgograd and Astrakhan that pass along barchans and sand dunes. These sections are so extensive and varied that they do not feel like circular routes but, instead, like long special stages that happen to start and end at the same point.

Professionals consider the complexity of Silk Way-2013 a virtue. Sergei Talantsev, one of the route developers and winner of the longest marathon in the history of rallies (Paris-Moscow-Beijing 1992), briefly comments on the route: “This race is not for girls!”

The famous Pierre Lartigue, the three-time winner of Dakar and one of the main developers of the Russian route, believes that the Silk Way is a real rally route this year. “We’ve created a very interesting geographic inclusion of all the possible zones, from the prairie table land to hilly broken terrain, with movement over open dunes, sands, and fast strips in the mountain terrain,” says Lartigue.

The route developers have tried to give participants the chance to gain new experiences. Thus, they chose paths that pass through historic and cultural centers. The beginning section from Moscow to Tambov will allow participants to savor traditional Russian midland landscapes. The second section of the special stage passes through the site of the Battle of Stalingrad, whose 70th anniversary is being marked this year. Next to the route can be seen the still-preserved trenches and remains of dugouts.

The special stages near Astrakhan are aptly named “One thousand and one dunes,” or, “The Khazar labyrinth.” These uninhabited and empty territories are little-known not only to foreign sportspeople but also to the majority of Russian ones.