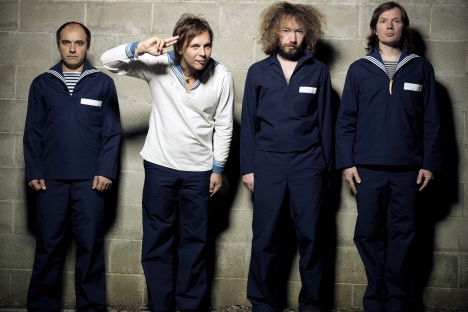 Russian rock musicians are inviting their colleagues from around the world to attend the VRox International Music Festival in Vladivostok. The project is the brainchild of Ilya Lagutenko, who is the frontman for the legendary rock band, Mumiy Troll.

Russian rock musicians are inviting their colleagues from around the world — and from the Asia-Pacific Region, in particular — to attend the VRox Russian Asian and Pacific Rim International Music Conference and Festival in Vladivostok, to be held on Aug. 23-25.

The project is the brainchild of Ilya Lagutenko, who is the frontman for one of Russia’s most creative rock bands, Mumiy Troll.

Ilya Lagutenko, who sings in Russian, English, Chinese and Japanese, is the official VRox festival promoter and producer.

View the gallery: Vladivostok, voyage across the hilliest Еastern tip of Russia

He recently sat down with Rossiyskaya Gazeta to talk about Mumiy Troll's recent 14-month tour on board the four-masted barque STS Sedov, during which the band called at different ports in Asia, Africa and Europe to take part in musical festivals and gigs—including their first-ever concert in Hong Kong this past March.

Rossiyskaya Gazeta: How easy did you find it to convince other countries in the region that Vladivostok should become the focal point of modern rock culture in the Far East and Asia-Pacific?

Ilya Lagutenko: In choosing the venue for the festival, I was driven by the desire to bring Asia-Pacific artists and promoters together.

Vladivostok is optimally suited for this mission, both thanks to its location and because of the booming economic and cultural development of the neighboring countries.

This growth is particularly impressive in South Korea and China. The new, thriving musical landscape, which has emerged in these two countries over the past few years, is extremely interesting to follow and worth borrowing from.

VRox will understandably feature guest musicians from such historically rock-oriented Pacific Rim nations as the U.S., Australia and Japan.

The music scene of other countries to be represented at the festival — including South Africa — is virtually unknown to the Russian public. I know most of the lineup personally, from various, previous rock fests.

The most important thing about VRox is that it will be attended by representatives of major and independent labels from the participating countries, as well as by concert agents and brands traditionally supporting musical festivals.

The international music press will be heavily represented: Even members of the Grammy coordinating team are planning to attend!

All these guests will take part in discussion panels open to the public. For Russian musicians, our festival should become the first step on their way to a long and successful creative career.

RG: Finding sponsors is usually the most difficult part of organizing a rock festival. Surely Mumiy Troll is not planning to fund the event exclusively from its gig fees?

I.L.: No new festival of the VRox scale can be launched with sponsor money alone. Sponsors typically expect to receive an immediate return on their investment.

We do realize that, in the first 5-7 years, we will have to pay for many things out of our own pockets and invest a lot of efforts in the project.

For me personally, VRox is a way of thanking the city that gave me the opportunity to found Mumiy Troll all those years ago.

The city administration has agreed to cover the expenses related to municipal and other such services. Most of the headliners and conference speakers kindly agreed to our payment terms.

To achieve this, however, I had to personally negotiate with nearly 100 people.

Fortunately for us, Mumiy Troll enjoys a very positive reputation—not least thanks to our tour on the Sedov, which we used to promote the Vladivostok rock scene.

RG: Are you expecting to earn a lot as the VRox promoter and producer?

I.L.: In contrast to "traditional" promoters, I have a very special vision for this festival. I see it as a blend of open-stage gigs, citywide festival performances, creative labs and educational centers.

It should give a boost to the city's infrastructure, direct public attention to new educational opportunities, and create a fundamentally new cultural vector for Vladivostok.

VRox will also provide unique investment opportunities for small business. I even daresay it will help to improve Russia's overall international image.

I know I may sound like a cross between a gasbag politico and a con man, but I really don't see any other way for Vladivostok.

I graduated from the AsianStudies Department [of Vladivostok’s Far-Eastern Federal University] with a degree in area studies. I used to research similar problems professionally, in the context of various historical and economic processes.

I don't believe any current projects for Vladivostok — including those to set up a Macau-style gambling zone here, or to lay export gas pipelines — are capable of generating a positive living environment that would motivate young people to come to study, work and live in this city.

Music and arts, on the other hand, can help in achieving this.

In fact, no other Russian city could host such a festival for a variety of reasons.

Vladivostok benefits from its geographic location, modern infrastructure — including brand-new bridges and airport facilities — and from its positive urban mythology.