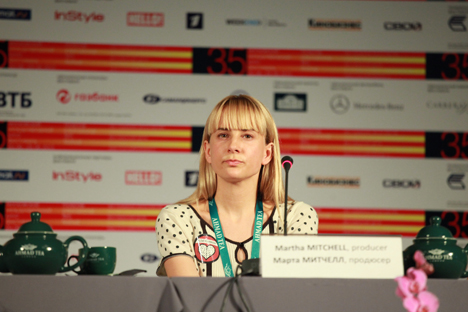 Martha Mitchell: "Kevin saw the film at the end of the filming process and he had time to come to the realization that we show him on it, and he was happy with that, as well as his family". Source: Press Photo

“Crash Reel,” produced by Martha Mitchell, is one of the documentary films being presented at the 35th Moscow International Film Festival documentary films program. Mitchell has also worked on projects such as "Miami Vice," "Avatar," and "The Adventures of Tintin."

The film is about Kevin Pearce, a young American snowboarder at the peak of his career. Unfortunately, he suffered a very serious head injury in 2009, while he was training for the 2010 Vancouver  Winter Olympics.

Lucy Walker, the film's director, met Pearce just some months after the accident. At conception, the film was to cover the story of a winner. After the meeting, the idea behind the film changed, instead becoming a work about a winner who is meant to win, but does not.

However, the film follows Pearce even before the accident, when he was winning a lot of money snowboarding and training with friends who traveled the world together.

RBTH: You spoke of a winner who does not win. Somehow the topic is discrediting Kevin. What was his attitude to that?

Martha Mitchell: At first, he was just adjusting mentally to the new reality of his life and still had the idea that he would come back to snowboard and start competing again.

At the beginning of 2012, we filmed a couple of events he took part in: one was the first time he went snowboarding after the accident, and he himself was saying – well, I'm falling, I'm not as good as in the past.

Then he went to another very big event and he kept falling and he was very upset. And we filmed how he was falling.

There was a lot of discussion about if we can include the shoots in the film. Lucy explained to him why it is important to show it and, finally, he was coming to the realization that he will not be the champion of the past.

Finally he was a different person and adjusted his expectations to life and started to speak about security with children, to make people understand how important it is to take care of your brain.

Kevin saw the film at the end of the filming process and he had time to come to the realization that we show him on it, and he was happy with that, as well as his family.

RBTH: What are your impressions of the festival, which films did you have time to watch?

M.M.: I just got in last night, so I had the opportunity to see one film, a documentary called "The Ridge," which is very interesting.

RBTH: Are you familiar withRussian documentary and fiction films?

I'm not very familiar with Russian films. I have seen some of the older classic fiction films, but since I've got out of fiction film making I have not studied many films.

A couple of years ago I saw one Russian documentary film, I don't remember the title, but it was about a little orphan boy.

But I can say that, over the past years, while working on this film I've almost seen no movies, because I've worked so much.

RBTH: Why did you decide to give up fiction film making?

M.M.: I think because it was so much about appearence and about actors and actresses and the relationships with them in Hollywood may be quite difficult.

I said to myself: the documentary movies, are the ones that I watch, because they show real life, and they tell the stories of real people and I found it that ficion films are much more about make-up and wardrobe and money, and I just wanted to stop with them.

RBTH: Have you ever thought to make a documentary film about Russia or in Russia?

M.M.: I would make a documentary about anything, if it's the right story, the right complexion of elements, because, as I have learned making the film with Lucy Walker, the surrounding country, landscapes can be anything, but the story is what you really need.

RBTH:   Which kind of Russian stories or topics could be interesting for an English speaking audience?

M.M.: It's a hard question, because I don't want to say politics.

I could just say a film on Pussy Riot or about this American guy who got stuck at the airport!

There are really so many things: the Orthodox church, architecture, the theather, the ballet at the Bolshoi. I think the foreign audience has always been impassioned by Russian culture.

So I think anything may be interesting if you find the story and you put on some good visuals and music.

RBTH: What kind of reaction do you expect from a Russian audience to your film?

I don't know yet. From what I heard I expect a good reaction, and I'm here to see what happens, what kind of people may be interested in our story.