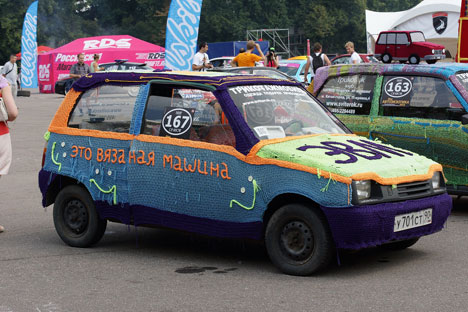 The caption on the car says it's knitted. Source: Olga Sokolova

One of Russia’s biggest annual car events – the 17th Auto Exotica 2013 international car show – took place at the beginning of the month in Moscow, at the Luzhniki sports complex. Some 3,000 vehicles were featured in the show.

Another favorite, the Bugatti Veyron, is even faster than the SLR McLaren. Auto Exotica’s chief producer, Yevgeny Petrov, says it’s the fastest and most powerful car in the world. With 1,000 horsepower, it can achieve speeds in excess of 400 km/h and go 0 to 100 km/h in 2.5 seconds.

The most interesting of the retro cars was the American Waverly Electric Limousine 4-passenger. Manufactured in 1913 the Waverly’s bodywork was more reminiscent of an old-fashioned carriage,  with almost 400 kg of batteries and a 96-volt electric motor. One charge would keep the car going at a speed of 25 km/h for 50 km.

Afterward the car would need a lengthy recharge, and this quite possibly is the reason electric cars lost out to competition in the beginning of the 20th century.

The Waverly displayed at the Moscow exhibition has survived to the present day in full working condition (which it periodically demonstrated by driving round the venue) and in practically its original internal and external finish.

The Oror (Gull) from Armenia was the show’s real star. Built in 1981 by Genrik Matevosyan, the car got its name from the way its vertically opening doors resemble a gull’s wings. This door style has been used by car designers around the world primarily for sports and luxury cars.

But despite its apparent flippancy, the car remains in excellent working order and made its own way from Yerevan to Moscow.

The Oror (Gull) from Armenia was the show’s real star. Source: Olga Sokolova

The masterpiece of a car is in constant use and has already driven about 2 million kilometers. “I’ve rebuilt the engine and replaced some parts, but the bodywork is original,” the car’s owner revealed. “It has a 1.2-liter engine, which is quite enough.

VIDEO: Old-timers' rally in Moscow: race of the fastest among antiques

The car can accelerate up to 180 km/h because of its very low drag.” The reason why the Gull’s bodywork has lasted so long is that it’s made from fiberglass and is not susceptible to corrosion.

Auto Exotica’s most unique category (crazy cars) features not so much the fruits of engineering design but the results of excessive flights of fancy.

For example, some home-grown inventors had the idea of fitting an aircraft jet engine onto the roof of a Ukrainian Tavria hatchback. And it’s not just for looks, the car is actually propelled by jet power!