Siberian Puppeteer creates puppets with lives of their own 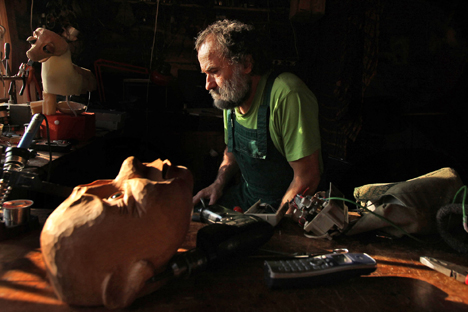 Each robot sells for an average price of €1,500 ($1,960), with an average production time of one month. Source: Alexei Bushov

In the early 1990s, Tomsk cybernetics engineer Vladimir Zakharov started a revolution in puppet theatre when he invented “wrist puppets,” which bend their wooden arms, blink, move their fingers and even talk. People come from all over Europe to learn how to make them with Zakharov.

Finding Vladimir Zakharov’s Theatre of Live Puppets is no simple task. His website clearly warns: “Don’t come in your car!” You can get there by bus, followed by a 15-minute walk in the direction of the Tom River. It is surrounded by wooden houses nestled between high-rise brick buildings.

In the shade of the trees, a Russian log cabin lies hidden at the very back of a side street, where former robotics technician Vladimir Zakharov resides and puts on his shows as a puppeteer. The first floor of the cabin has been made into an auditorium, consisting of homemade wooden benches that seat up to 50 people.

Zakharov’s is a one-man theatre: He is the light technician, costume designer, script writer, set designer and voice actor. Sometimes, Zakharov manages to speak in five difference voices during a performance!

Zakharov recalls how he decided to open a puppet theatre in 1991—and no ordinary puppet theatre, either. The stars of the shows were to be played not by classic marionettes, but by “wrist puppets” manipulated by barely perceptible hand movements.

Puppets from all over the world revived in Moscow's theatre

Made from the roots of Siberian pine trees, these puppets open their eyes ever so slightly, wave their hands and wiggle their tiny wooden fingers. Concealed inside each puppet is a secret mechanism with a wire attached to its head and arms.

When Zakharov opened his theatre, his friends did their best to talk him out of it: “Why?! How will you pay for it?!” Their concerns were not without reason; only a madman would get involved with the arts in Russia in 1991, when chaos ruled in the wake of the collapse of the Soviet Union.

Yet Zakharov had dreamt of opening his own theatre since he was a young boy, when he made his first puppets out of papier-mâché at school.

In the 1990s, he finally made up his mind: “It’s either now or never.” He literally made his theatre out of (almost) nothing—burlap, pieces of wood he found in the forest, and wire he picked at a scrapyard. He built his house as well. Now complete with a modern surround-sound system, expensive lighting equipment and an incredible design, the theatre has come a long way from its humble beginnings.

In addition to his wrist puppets, Zakharov makes electro-mechanical puppets that can move and speak, thanks to sophisticated electronics (whose software Zakharov writes himself) in their heads.

Made from the roots of Siberian pine trees, these puppets open their eyes ever so slightly, wave their hands and wiggle their tiny wooden fingers. Source: Youtube

Once they have been fired up, the puppets live their own lives; even their own creator does not always know what they will say. The secret is in their programming, which randomly chooses from a set of predetermined phrases.

Voices begin to sound from all sides of the theatre at its entrance; the puppets are chatting with their guests. “Somehow you look familiar,” one of them whispers. “Don't forget to buy your tickets!” a wooden, mechanical, older lady persistently reminds visitors, as she sits in the corner knitting a scarf. And do not be alarmed if a wooden man peeps out of the cabinet in the bathroom and suddenly inquires as to whether everything is alright.

Zakharov used to make his robots—over 200 in total—available for sale to a wide range of customers, including collectors, friends, a meatpacking plant, a Portuguese puppeteer, former Russian Minister of Economic Development German Gref and some Russian companies that ordered the robots for advertising.

One company put a puppet of Paul McCartney in their window, calling out to potential customers to buy bathtubs and sinks made by a certain manufacturer; the strategy was a phenomenal success.

Each robot sells for an average price of €1,500 ($1,960), with an average production time of one month. It is thanks to his sales that Zakharov was able to finance and equip his theatre. Now he brings in ample funds from selling tickets to his performances.

Zakharov had dreamt of opening his own theatre since he was a young boy, when he made his first puppets out of papier-mâché at school. Source: Alexei Bushov

A master and his students

Students regularly come to Tomsk and live in the theatre itself. One Italian student signed herself up for three months. Having seen the Tomsk puppeteer at a festival in Parma, she fell in love with his wrist puppet and immediately set out to Siberia to take private lessons.

“Making puppets is a very complicated task,” says Zakharov. “I recently held a master class in Italy, so we spent the first few weeks learning how to carve the hands, followed by the head—and that didn’t even include the eyes! Indeed, not everyone can drill a half-millimeter hole into a piece of wood.”

Vitaly, a Ukrainian man, recently came to study under Zakharov. Vitaly had spent his whole adult life working as an economist, but, in his heart, he wanted to write stories and put them on the stage. He dropped everything and came to live and study the art of puppet-making with Zakharov.

“This man really surprised me,” the puppeteer says. “He just went and changed his profession. Now, instead of working in a bank, he puts on children's shows.”

Thanks to media coverage, Zakharov’s fame has spread rapidly all over the world. Now puppets and robots made to order by Vladimir Zakharov live in various countries, including Italy, Greece, Spain, France, Lithuania and Japan. One of them, bearing a resemblance to Robert Bosch, has taken up residence in the German engineer and inventor’s house-turned-museum in Stuttgart.