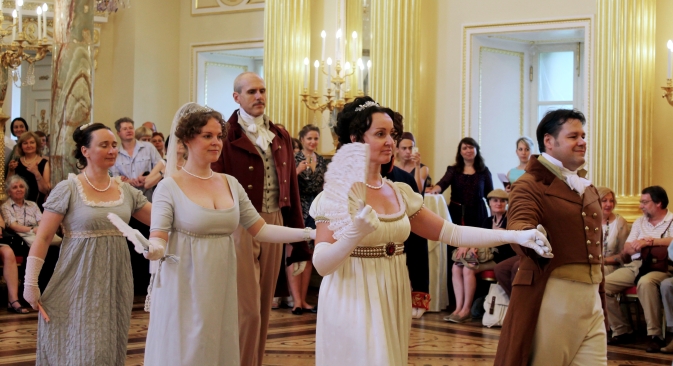 “The Great Ball” exhibition at the Tsaritsyno Museum until Oct. 13, contains 460 exhibits—all connected with the tradition of high-society balls in Russia. Source: Maria Afonina

In 18th- and 19th-century Russia, the social life of the aristocracy revolved around a series of high-society balls and all the finery they entailed: elegant postal invitations, gorgeous dresses, jewels and other luxurious symbols of the high-life. At the Tsaritsyno Museum, “The Great Ball” exhibition has opened as part of the celebrations for the 400th anniversary of Russia’s royal house of Romanov.

The first ball in Russia took place in the 17th century, at the wedding of Lzhedmitry and Marina Mnishek. However, balls only really took root in the life of the Russian aristocracy in 1717, with the establishment of the Assembly on the orders of Peter I (the Great).

These high-society balls were not exclusive to the social calendar of aristocrats; they were also staged by merchant’s guilds and local councils.

Later on, in the late 19th century and early 20th century, balls ceased to be exclusively a feature of society’s upper echelons, and public balls were organized for certain professions—for example, theatrical societies, artists or architects.

The actual word “ball” became a part of the Russian language in the 18th century, borrowed from the French “bal.” Balls were not just a place for dancing: People gathered there to have fun and socialize, whilst the older generation discussed political news or played card games.

At the turn of the century, balls were augmented with opera, ballet and musical performances, and charity balls were held, where money was collected for people in need.

Revival of the ballroom tradition

400 years since coronation of the first Romanov

The ball season started in late fall and lasted until spring, with the loudest balls taking place around February, during “Maslenitsa”—the start of Lent in Russian Orthodoxy. Balls were also held over the summer, but not during Lent or religious festivals requiring fasting.

The success of a social season was not just measured by the lavishness of the receptions and the finery of the guests, but also by the number of newly-engaged couples at the end of it.

St. Petersburg boasted a number of places perfect for holding balls for the Russian court. The so-called Great Ball, which opened the entire ball season, was held in the Nikolaevsky Hall of the Winter Palace; “small” and “medium-sized” balls were organized at the Hermitage and at the Anichkovy Palace; in the summer, guests were invited to Peterhof, or to the palace at Tsarskoe Selo.

Despite the ostensible glamour of these balls, according to the great-uncle of Nicholas II, Crown Prince Alexander Mikhailovich (1866-1933), expenditure on them was minimal: “There was no need to make special purchases, and neither was there need to hire in special staff. The wine was provided by the General Directorate of Principalities, the flowers came from the numerous greenhouses dotted around the court’s property, and the Court Ministry supported a permanent orchestra.”

Preparing for the ball

Balls were always preceded by an exciting postal delivery—beautifully elegant invitations, often drawn by the best artists. The artists would also draw full-color posters to create extra buzz around the event.

The language of the fan

In the 18th-century, fan movements had clear messages in high-society.

Here are a few examples from the “language of the fan”: The fan is opened and the lady waves a suitor away – “I am married.”

The fan is completely opened – “You are my idol!”

Part of any woman’s preparation for attending a ball involved researching the fashion journals of the day—most often French. The fashions for dresses came and went, but, throughout the history of balls in Russia, fans remained an important accessory for female guests.

They were not only used for cooling off during and after the dances, they were also an important aid to flirtation—first revealing the face, and then masterfully manipulating the large fan to show themselves to their best advantage.

Flowers would always be an important addition to any dress at a ball, there to decorate hair-styles, corsets and skirts of dresses, or simply to be carried in hand as an accessory. In the 18th and 19th centuries, a fashion accessory called a “portbuket” was fastened to women’s dresses; this was a silver or gold jewelery item in the form of a small vase and a bouquet of artificial flowers.

Of course, no self-respecting woman would attend a ball without a “carnet du bal,” where she could write down the names of all the suitors with whom she planned to dance the Polonaise, the Mazurka or the Kadril.

Throughout the history of balls in Russia, fans remained an important accessory for female guests. Source:Maria Afonina

The Winter Palace hosted its first masked ball in 1763, during the reign of Catherine the Great. These balls were attended by several thousand guests—the aristocracy and eminent representatives of the merchant class.

The Viennese Ball, tradition stretching back over centuries

The masked ball tradition thrived throughout the 19th century. Costume balls were traditionally organized on Jan. 1, or during Maslenitsa.

According to Alexandra Fedorovna, wife of Nicholas I, in 1818 she attended a masked ball at the Winter Palace dressed as an Indian prince, whilst the Empress Elizavita Alekseyeva went as a bat.

The balls were often given an Eastern or historical theme. So, in 1837 for example, Nicholas I went to a Chinese-themed masquerade dressed as a mandarin fruit, with a large stuffed belly and green top.

The most sumptuous events of this kind were reputed to be the coronation balls. These balls—held at the Granatov Palace in Moscow, starting with the crowning of Ekaterina II—were the symbolic opening of the ceremonial proceedings.

In fact, they often doubled as receptions put on by foreign ambassadors to mark the occasion. For example, to celebrate the coronation of Nicholas I in 1826, a ball was held at the residence of French Ambassador Marshall Marmon, Duke of Ragusa, and at the Russian home of the English Ambassador, Duke of Devonshire.

In 1903, the famous costumed ball “à la russe” took place at the Winter Palace. Here, all guests attended in finery from the reign of Alexei Mikhailovich.

Some had copied the costumes depicted in ancestral portraits hanging in their homes, whilst many of the women showed up in ancient national costume—sarafans and headdresses mimicking traditional kokoshniki.

The last lavish ball of that era was a ball held on Feb. 23, 1913, in the halls of the Noble Assembly, to mark the 300th anniversary of Romanov reign.

According to the memoirs of Duke Kokovtsev (then head of the Imperial Government), the festivities did not leave any particular mark: “This wasn’t a real celebration, and I myself was gripped by a conscious fear of the immediate future, and daily concerns of what the next day would hold, and how we would manage to ward off a global catastrophe; these were the things that demanded all of my attention at that time.”

After the revolution, balls and all the heritage of Imperial Russia were filed away into the country’s past. Nonetheless, in the 20th century, the poetic myth of the magnificent “Russian ball” took hold and found its expression in art, cinema, music and theatrical performances.

“The Great Ball” exhibition, which will be on display at the Tsaritsyno Museum until Oct. 13, contains 460 exhibits—all connected with the tradition of high-society balls in Russia. The exhibition will include ball gowns, costumes, and posters and pictures that depict the balls themselves and zoom in on the dancers who attended them.

A separate section of the exhibition is dedicated to balls staged by the Bolshoi Theatre. Here visitors can see samples of ballet accessories and costumes, embroidered evening bags and, for example, a dress worn by Maya Plisetskaya that was designed and created by Pierre Cardin. The exhibits are on loan from 10 museums across Moscow and St. Petersburg.