Moscow libraries to be turned into media centres and clubs 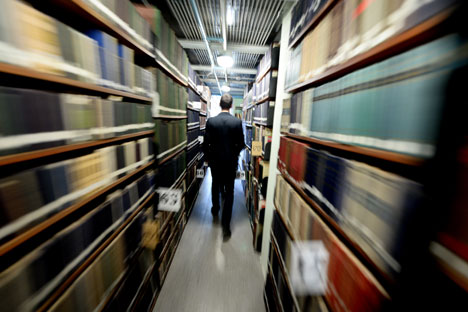 The Moscow Library Center deputy director: 'The reform aims not only to promote reading and improve the quality of reading, but also to turn libraries into community centers.' Source: ITAR-TASS

Five libraries will be turned into modern media centres and district clubs to welcome those wishing to discuss not only literature, but also politics.

A new project is being implemented to breathe life into Moscow’s libraries.

By the autumn five district libraries will be turned into modern media centres and district clubs. The project also calls for changes in their appearances. Bars and heavy blinds, which create an oppressive atmosphere, will be removed from the windows. Spaces will be rearranged so as to meet all reading requirements and split into new areas for reading, recreation, conferences, lectures and displays. The initiators stress that people come to libraries not only to read, but also to communicate, listen to lectures, get advice, discuss their problems and work.

The audience is expected to change as well. Libraries are mostly used by school children and pensioners, because most of them are only open from 11am to 5pm. A working adult with an active lifestyle can’t get there. As soon as libraries start working longer hours, young adults and middle-aged people will be able to join, at least that’s what one of the initiators and developers of the project– deputy director of the Moscow Library Centre Boris Kipriyanov – says.

“The general concept is that libraries should be as open as possible,” Kupriyanov says. “We will give people access to stocks, we will introduce solutions for people to borrow books without coming into contact with librarians. A reader will be able to take a book, come up to a terminal to register and then take the book away from the library. Books can be returned to the nearest shop or underground station any time of the day or night. Updates (of titles) will be more regular, there will be more recently published books, and they will be delivered to libraries a lot faster than they are at present.

“Another problem is that half of the people in Moscow are not officially registered as residents in the city,  but you have to be registered in order to get a library card. Therefore, we have to make the library registration procedure easier. We won’t be giving books to people who don’t have a registration, but they will be able to read in the reading room.

“The biggest challenge is to change the status of librarian, to turn someone responsible for giving and taking books into a guru, your guide in the world of literature. You can easily get lost in this world; there is hardly any book navigation in Russia. Criticism is not the most effective guide, while book-trading networks lobby for large publishing houses by offering almost exclusively commercial literature. Libraries therefore become venues where people can have something to choose from.”

Doubters are sure that libraries are doomed, at least those libraries that have failed to introduce reforms. The share of printed books keeps falling as e-book readers make their way into people’s lives. Why should those readers, with easy access to the internet access, want to go anywhere else to get information? Why do they need books at all?

“This is only partially true,” says Kupriyanov. “The book publishing world is changing, it is being restructured, but it’s not declining in terms of the number of people who are reading and the number of book being read. Why should you pay 40 roubles for a pocketbook if you can download it for the same 40 roubles? But this only applies to popular literature that you read, but won’t ever read again. All of the popular books are available online, and I believe it’s good that people are not cut down trees in order to let someone read a book instead of watching other people on an underground train. You can do with an e-book reader. However, there are whole segments of literature that exist only on paper, for instance, academic publications. This dilemma – a digital or paper book – isn’t real. And then again, why can’t we give library visitors e-book readers with legal content? We will thus draw lots of readers back into the legal framework and offer them a chance to read legal books.”

The reform aims not only to promote reading and improve the quality of reading, but also to turn libraries into community centres, Kupriyanov says. Where else can you get relevant information and discuss vital problems?

“You can’t issue an order to create a popular club, but you can create an environment for people to perceive a library as their own space. It is a great place to meet, discuss books, communicate and talk about what is happening in the country and around the world. Moscow has 480 district libraries, which is a very impressive number. This area belongs to all of us. We need Muscovites to understand that this street, park, library, museum and theatre are theirs. Cities are the legacy of the industrial past, but the world has changed, and so has the city. We can’t build our life around a factory now, because there’s no factory. We can’t use an office building, either, but we can use a club, a museum or better still, a library. The Soviet system, in which many of us lived half their lives, was a socially developed one. People played dominoes in backyards, pensioners occupied benches near houses. People stood in queues and chatted, came to playgrounds and talked. Twenty years ago, people knew their neighbours and called them by their names. Nobody says hello to their neighbours now. So we want people to say hello again and talk to each other. People are tired of being isolated.”