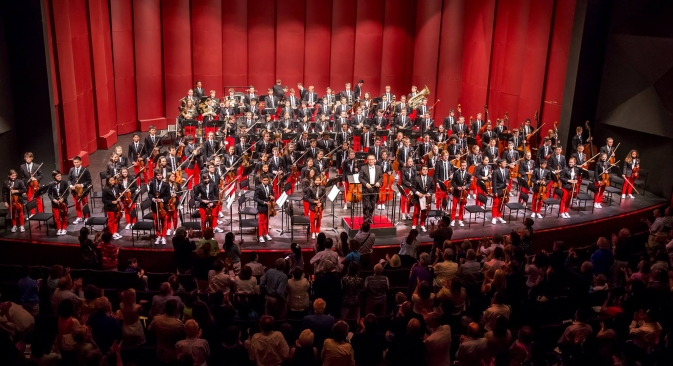 Young musicians from 42 U.S. states will perform in Moscow, St. Petersburg, and London under the baton of Valery Gergiev.

The newly-formed National Youth Orchestra of the United States of America (NYO-USA) will give two concerts in Russia as part of its international debut tour. The first concert will take place in the Great Hall of the Moscow Conservatory today. The second one will be held on the new stage of St Petersburg's Mariinsky Theatre on July 18. The orchestra will also play at the Royal Albert Hall in London on July 21.

Formed under the aegis of Carnegie Hall, the new symphony orchestra comprises 120 musicians aged 16-19, representing 42 U.S. states. NYO-USA is touring under the direction of the famed Russian conductor Valery Gergiev.

The orchestra's U.S. debut concerts at Purchase College, State University of New York, and at the John F. Kennedy Center for the Performing Arts in Washington, D.C., proved to be a huge success.

Valery Gergiev gave a phone interview for Rossiyskaya Gazeta during the New York rehearsals prior to going on tour.

Rossiyskaya Gazeta: The New York debut proved to be a great success. What can you say about the orchestra?

Valery Gergiev: The kids did great. Their success was colossal, gaining them much publicity and good press. A new orchestra was born before our eyes. We are speaking about very young musicians, basically children, who still go to school and college.

This is the first time in the history of the United States that such a national youth orchestra has been created. We should congratulate our American colleagues on this important achievement. I spent several days in intensive rehearsals with the orchestra; we kept playing well into the night. My aim was to give the orchestra a solid foundation for its debut tour.

The concert at the Moscow Conservatory will be recorded by [the Russian TV channel] Kultura. The London concert will be broadcast as part of the prestigious BBC Proms festival. All this guarantees a significant TV audience.

RG: Does the orchestra's current level merit this high-profile coverage?

V.G.: This is a very strong orchestra. Apparently, it is meant to demonstrate the strength of the current professional music training system in the U.S. The selection process was held across the entire country and involved auditioning thousands of musicians.

As a result, the orchestra comprises 120 young people representing 42 states. There are many Hispanics, as well as Chinese, Japanese, Koreans, and representatives of various European ethnicities. They study in the U.S., Great Britain, and Germany.

We have a very challenging concert program. We will open with the European premiere of Magiya, a work written by the young American composer Sean Shepherd on co-commission from Carnegie Hall and the BBC. We will also be playing Gershwin's widely popular Porgy and Bess suite. Tchaikovsky's Violin Concerto will be performed by Joshua Bell, one of the most celebrated U.S. violinists.

Personally for me, the piece de resistance will undoubtedly be Shostakovich's Tenth Symphony. It was my desire to expose the youth orchestra to the essential values of 20th century symphony music within a short period of time. There are no pieces suiting this purpose better than Shostakovich's symphonies.

RG: The musicians are very young; many of them have no prior experience of playing in an orchestra. How difficult was it for you to rehearse such complex works with them?

V.G.: It was extremely fascinating! They are strong and technically advanced kids, they have plenty of enthusiasm and a great ability to concentrate. They received me well, and I paid them back by working flat out and going into the minutest detail.

We discussed everything, including the quality of sound, phrasing, tone quality, dynamics, as well as symphonic scope and scale - something that cannot be achieved just by playing loudly. My role in this process was more that of a teacher than a conductor.

Importantly, the U.S. public is very enthusiastic about the youth orchestra idea. I have worked with virtually all the famous youth orchestras in the world, and I do believe it is important for such establishments to assert themselves, because they secure a sustainable music future for their respective countries. Looking at the high level of NYO-USA, I can say that we don't have to worry about the quality of U.S. orchestras for at least a decade to come.

RG: Why is there no similar youth orchestra in Russia?

V.G.: It is my hope that the NYO-USA example will motivate Russia to create a national youth orchestra in the near future. We need such an orchestra. We owe it to our young generation. It is unfortunately not by accident that many [young Russians] leave the country even before they turn 20, going to the West in search of better quality education.

However, the climate for musicians is improving in Russia and there are fewer reasons now to think that an education should be received anywhere but in Moscow, St Petersburg, Kazan, or Yekaterinburg. That being said, we are going to find it extremely difficult to form an orchestra on the same level as the NYO-USA.

I would like to ask the academic staff of the Moscow Conservatorium, the Gnesins Academy of Music, music schools, as well as Russian journalists, to pay close attention to the NYO-USA concerts in Moscow and St Petersburg. Creating a national youth orchestra in Russia would be a very noble thing to do, [but in order to achieve this] we need to be aware of the international experience.

The National Youth Orchestra of the United States of America is the first national youth orchestra in modern U.S. history.

A project of the Weill Music Institute, the educational arm of Carnegie Hall, the orchestra consists of 120 musicians between the ages of 16 to 19. Young musicians from all over the country take part in the program: each year they study for 2 weeks at Purchase College, State University of New York, and later go on tour with world famous directors (tuition is free).