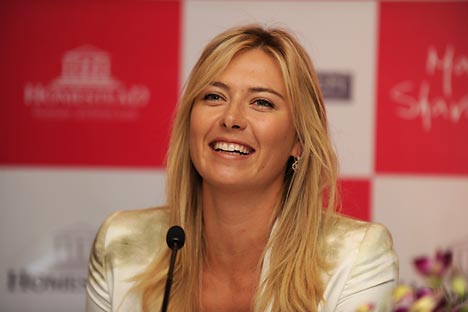 Sharapova decided to part ways with her coach after defeat in the second round of Wimbledon 2013. Source: AFP/East-News

The American tennis legend and winner of 8 grand slams will try and help the glamour girl of tennis overcome Serena Williams.

Maria Sharapova has hired American tennis legend Jimmy Connors to be her coach, the Russian tennis star said on her website on July 13. “I am happy to announce that Jimmy Connors will be my new coach. I am really excited about our new partnership and looking forward to the upcoming tournaments,” Sharapova said.

Connors replaces Thomas Hogsted, who had worked with Sharapova since 2010, joining her team when she worked on a comeback post-shoulder injury. He became her head coach a year later and since then, she won last year’s French Open and reached two more Grand Slam finals, as well as an Olympic final.

Sharapova decided to part ways with Hogsted after defeat in the second round of Wimbledon 2013, when she lost to number 131 Michelle Larcher de Brito.  She announced her split with him on July 11, saying, “I am very thankful for all his work, and wish him much success in the future”.  According to the Russian tennis superstar, he is “not able to travel in the near future.”

60-year-old Jimmy Connors won eight Grand Slam singles titles in a storied career. He won five US Open titles, two Wimbledon titles and the Australian Open once, topping the world rankings from July 1974 to August 1977.  As a coach he helped Andy Roddick to reach the final of the US Open in 2006, the semi-finals of the Australian Open in 2007 and the quarter-finals of both Wimbledon and the US Open, before they split in March 2008.

Connors reacted enthusiastically on working with Sharapova. He said on his Twitter account:  “Excited to be working with four-time Grand Slam champion Maria Sharapova. Adding to that number is the goal. Looking forward to some fun & hard work!”

Connors has already worked with the Russian star in the past. He was Sharapova’s coach in 2008, just before the Australian Open, which Sharapova won.

At the moment, Sharapova is preparing for the Rogers Cup in Toronto, starting on August 5. It will be her sixth appearance at the Rogers Cup, but she has never won the tournament, where she was a finalist in 2009.

Based on RIA Novosti, BBC and Mariasharapova.com.