Taking photos that would never be published 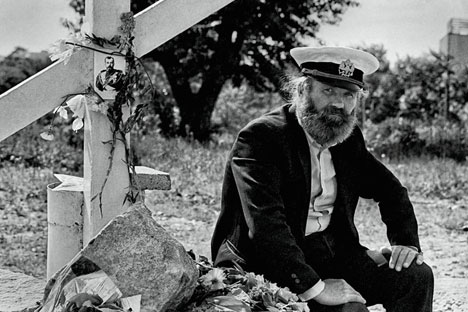 As a child, Alexei Vladykin would walk to school in his native Yekaterinburg past Ipatiev House, the place where the royal family was executed, without even knowing it. The building had been demolished in 1977 at the “suggestion” of KGB chief Yuri Andropov, a move approved unanimously by the Soviet Politburo.

“I have no recollection of it being pulled down,” says Vladykin. “But I remember vividly years later, as a photojournalist, I travelled to the editorial office past an unkempt abandoned lot. And that at some point, a wooden cross was erected on the spot.”

The cross was planted by a local man, Anatoly Gomzikov. Vladykin recalls: “He was a strong believer in God, an elderly man who had had his ups and downs in life, but had never lost his dignity – unlike those who broke down the wooden cross just a few days later.”

A metal cross was erected in its place and a year later in 1992 residents and clergymen gathered to lay the first stone of the Church on the Blood at the site.

“I was taking pictures knowing that they would never be published: they were sure to be rejected by editors on ideological grounds,” says Vladykin. “But the events certainly had historical value, so I felt obligated to document them and then just shelved the negatives for the next 20 years.”

The cathedral was consecrated on 16 June 2003. “The most emotionally charged photos I made were of Mstislav Rostropovich and Galina Vishnevskaya,” Vladykin says of the ceremony. “They vividly convey the emphatic pain many people feel about the tragic death of the royal family.”

He also photographed the head of the team that investigated the authenticity of the remains of the royal family, Vladimir Solovyov. They first met in 1996, when the photographer asked whether the remains really were those of the Romanovs.

“He answered there could be no doubt about that. I asked then if I could take a few pictures. I remember him taking me to the laboratory where several glass sarcophagi stood. He took me to the one that was open at the time and said it contained the remains of Grand Duchess Anastasia.”

Two years later, Alexei was on hand as Yekaterinburg bade farewell to the royal family. “The fragments of their bodies were put in short coffins,” he said. Two of them – the Emperor’s and the Empress’s – were covered with state flags. The procession of people stretched for several streets. People held flowers, icons and postcards with the Romanovs on them and whispered: “Forgive us.”

The album of 200 photographs represents half a lifetime for Vladykin, who says: “I was 27 when I took the pictures of the cross in the deserted lot, and the photos for the last chapter of the book were made two years before my 50th birthday.”