Fines to be introduced for vandalism of heritage sites 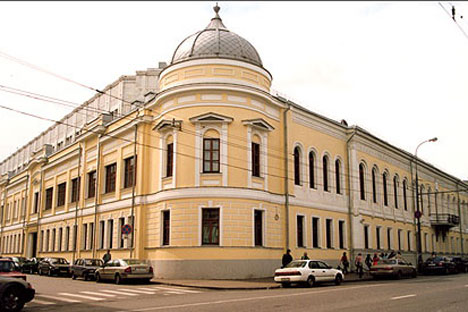 The Bolkonsky Mansion on Vozdvizhenka Street was bought by Prince Nikolay Bolkonsky, who was the grandfather of Leo Tolstoy and the prototype for old Prince Bolkonsky in the novel “War and Peace.” Source: Gruszecki / wikipedia

Vandals of historical and cultural sites in Russia will face a maximum penalty of $20 million.

Most often, architectural monuments in Russia are lost due to the fault of unscrupulous developers. An illustrative example is the story of the Pskov businesswoman, who, in 2011, acquired the Rosenberg Mansion that was built in late 19th–early 20th centuries. When purchasing the mansion, she undertook an obligation to preserve the building, as is usually required; however, after the transaction was completed, she demolished the building in order to build a hotel in its place.

In Russia, such stories hardly surprise anyone. The perplexing fact is that, for this violation, this woman was forced to pay a fine that amounted to only 35,000 rubles ($1,200). This is nothing, compared to the profits that a hotel will bring in. So, in fact, she was never really punished—just like many other developers.

During 2012, Russia lost 40 cultural heritage objects. These figures were recently provided by the Department for Control, Supervision and Licensing in the Cultural Heritage Sphere under the Ministry of Culture of the Russian Federation.

Vladimir Tsvetnov, director of the Department for Control, Supervision and Licensing in the Cultural Heritage Sphere under the Ministry of Culture of the Russian Federation, explains that current Russian legislation does not have an established system of penalties for unauthorized manipulation of cultural heritage objects.

However, even these measures now seem insufficient, because it is obvious that, in Russia, there are places and objects that are “worth” this amount of money. One such example is the Bolkonsky Mansion, which, in recent months, has become the epicenter of a battle between developers and community leaders.

The Bolkonsky Mansion on Vozdvizhenka Street was built in the late 18thcentury, after being rebuilt after a fire in 1812. In 1816, it was bought by Prince Nikolay Bolkonsky, who was the grandfather of Leo Tolstoy and the prototype for old Prince Bolkonsky in the novel “War and Peace.”

The mansion was able to survive two world wars and stood throughout the Soviet era. Then, in 2009, it was removed from the register of identified architectural monuments—and that was the beginning of its end.

According to estimates of the nongovernmental organization Arkhnadzor, which is dedicated to the protection of architectural monuments in Moscow, the leasing revenues received from the Bolkonsky Mansion, after reconstruction, can increase to several million rubles per year, and if so, the game is “worth the candle” for the developer.

The Department for Control, Supervision and Licensing in the Cultural Heritage Sphere explains the situation with the Bolkonsky Mansion by citing the lack of official documents confirming the cultural significance of the building.

“Yes, we all know that in this mansion lived the grandfather of Leo Tolstoy, and that it has a history; but there are no documents, so we cannot do anything. We are not historians,” says Tsvetnov, pointing to another problem in the protection of cultural heritage objects.

It is this question that often comes up during disputes between experts when carrying out alternative examinations. To this, cases of so-called fraudulent historical facts can be added, as well as incorrect conclusions of the experts.

The Beauty of Soviet-era Buildings

According to the members of Arkhnadzor, these very factors have led to the destruction of cultural sites such as Dynamo Stadium and the Detsky Mir (Children's World).

“Dishonest expertise is, unfortunately, thriving. This does not always involve the manipulation of facts; sometimes it simply involves incorrect conclusions, as in the case with the Circular Depot [of Leningrad Railway Station],” says Rustam Rakhmatullin, coordinator of Arkhnadzor.

He explains that the experts approved the demolition of this monument under the pretense of “adapting” it, though the demolished part was within the scope of protection.

The historical manipulation, in Rakhmatullin’s opinion, is also contained in the state historical-cultural expertise document, which stated that three-quarters of the walls at Dynamo Stadium, built in the 1920s, were torn down before the Olympics in 1980. “These three-quarters were indeed demolished—not in 1980, but in 2012.”

Experts continue to look for ways to save cultural sites. In addition to the introduction of heavy fines, another possible option would be the privatization of historic buildings, following the preparation of strict conditions for mandatory preservation and retention of the right of the authorities to terminate any contract in case of violations.

“We have to give these buildings to the private sector. We simply do not have enough money for all these cultural objects. We must involve private capital,” says Tsvetnov, summarizing the situation.