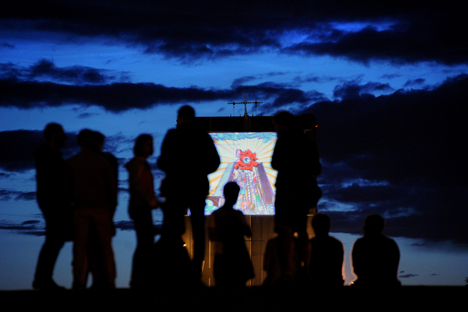 Trinity Bridge was linked to Merge Brug in Amsterdam, so people from both cities could see each other. Source: ITAR-TASS

Last Friday, thousands of people in St. Petersburg watched cartoons on Trinity Bridge. The event took place amidst the graFFFest festival and united people from Russia and the Netherlands.

On the night July 19-20, the famous Trinity Bridge in St. Petersburg was turned into a huge movie theatre. On the wing of the open drawbridge, a giant screen (roughly 4,305 square feet) was set up; the same thing happened to Merge Brug, or Skinny Bridge, in Amsterdam.

These transformations were undertaken in order to present a huge show featuring the best cartoon films from all over the world.

The idea for the multi-bridge festival belongs to Svetlana Petrova, director of the Multividenie, or Multivision, festival.

“The first time I came up with the idea of showing cartoons on the bridge was in 2005. I was so surprised to discover that the bridge is actually a huge and very suitable platform for the screen. It took me two years to find money for the project. Luckily, the Committee on Culture decided to support my enterprise, so we launched it in 2007 and continued in 2008. Then, due to the crisis, we had to give up the idea for some time. The project was re-launched in 2011, under a new name — graFFFest. We started using the new technologies of digital and street art,” says Petrova.

This year was declared the year of Netherlands-Russia cross-cultural exchange. As soon as Petrova found out about this, she contacted Yvonne van Ulden, who is the creative director of the KLIK! Amsterdam Animation Festival.

“I was very enthusiastic when I received the proposal from Svetlana Petrova,” says van Ulden. “When I visited St. Petersburg a couple years ago with our KLIK! Russian tour, we were introduced and I saw the pictures of the Multivision bridge event. It immediately got me thinking that it would be nice to do the similar thing in Amsterdam, since we have drawbridges too. I never executed the idea, but it lingered in my head. So it took me not too long to make a decision when Svetlana contacted me.”

Both sides — Russian and Dutch — noticed that there were plenty of difficulties in the process of organization. “Complicated, very complicated,” says Petrova. “During the last two months, every morning, we were woken up at 9:00 by calls from different committees with so many questions. But I am stubborn, you know.”

“It was not easy to organize something outdoors on the old little bridge that was never used for something like this before. It was also difficult because we were so far apart, and everything had to be done by email. This sometimes takes a little longer then when you work face-to-face. And it was a bit sad to see that a couple of Dutch films that were proposed could not be shown due to the strict Russian laws,” van Ulden says.

Still, the brick walls were broken and thousands of people in St. Petersburg and Amsterdam were able to see the show.

Suvorovskaya Square was full of young people: The most practical spectators brought folding chairs and hot coffee; some were sitting on the blankets, some just on the ground. It took a bit too long for organizers to start the show, but there was no hurry and people seemed to be quite relaxed — playing, singing, drinking coffee, or smoking.

GraFFFest 2013: A virtual bridge from Amsterdam to St Petersburg

“I like the idea of the festival,” said Andrei Rozov, one of the spectators. “The city is fantastic in the summer, and we don’t have to sit in the frowzy cinema. It is a good night, and I did enjoy the new video of the rock musician Boris Grebenschikov. It is really cool.”

There were almost no children on the square: It was too late for them, and the featured cartoons were more about adult life and adult problems. The general theme for the festival was life in the big city.

In the middle of the festival, Trinity Bridge was linked to Merge Brug in Amsterdam, so people from both cities could see each other. There were some technical problems, and it was, perhaps, too dark to recognize faces; still, the connection was set up, and organizers could greet people of two cities on the big screen.

The bridge event was the culmination of St. Petersburg’s graFFFest festival, which started on the July 9 to unite digital and street art.