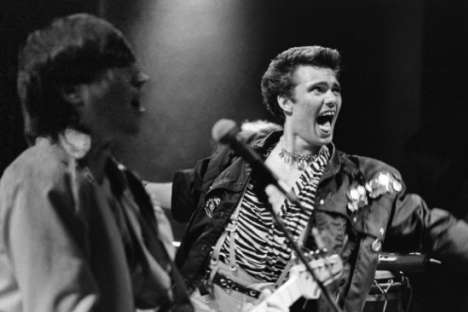 A new generation of composers emerged in the 1960's and 1970's, being able to use various techniques and electronic instruments developed in the West. Source: Dmitry Konradt

While more and more musicians in today’s Russia are using various electronic devices in their creative process, it is interesting to reflect on how electronic avant-garde and experimental music first developed in the Soviet Union and Russia.

Today, if we asked who invented electronic music, the likely answer would be a Russian engineer named Lev Thermen (1896–1993), who invented the first electronic instrument (the Termenvox) in 1919. Thermen's long life was very strange and dramatic. He lived and performed in the U.S., spent time as a prisoner in Stalin's GULAG, and worked in secret Soviet tech labs.

The Termenvox was way ahead of its time, and, for a long time, it was one of a kind—until more electronic instruments started emerging in the 1930's, in Western Europe and the United Sates. The Termenvox and its variations were widely used around the world in music projects, including in recordings and live shows of Led Zeppelin, The Rolling Stones, The Beach Boys and many others.

During Stalin’s rule in the Soviet Union, any type of avant-garde, experimental, or electronic music was officially suppressed by strict censorship in favor of traditional, classical and folk music genres. Modernist composers such as Dmitry Shostakovich were condemned as formalists in Soviet mass media. Only after Stalin's death in 1953 was music censorship eased to some degree.

Remembering Van Cliburn, the most Russian of American pianists

A new generation of composers emerged in the 1960's and 1970's, being able to use various techniques and electronic instruments developed in the West. New Russian composers were inspired by the works of German composer Karlheinz Stockhausen, French composer Pierre Boulez, Italian composer Luciano Berio and others.

At the time, the main problem for composing in new experimental and electronic styles was a substantial shortage in access to electronic instruments in the Soviet Union. American and Japanese synthesizers were a hard to find in Moscow, and their price on the black market was enormous. For example, the Roland SH-1000 synthesizer cost as much as a Soviet, mid-size sedan Volga.

In 1967, in Moscow's Scriabin museum, the Experimental Electronic Music studio was opened. The main attraction in the studio was the first Soviet-made synthesizer—ANS—developed by the engineer Evgeny Murzin (1914–1970). The name of this synth stood for the initials of composer Alexander Nikolayevich Scriabin. In this studio, Soviet electronic composers such as Edison Denisov, Sofia Gubaibulina, Eduard Artemiev, Stanislav Kreychi and others worked and experimented in electronic music field for many years.

Since places to perform electronic music did not exist in the Soviet Union, most of the electronic soundtrack of this era can be heard as scores in movies, documentaries, scientific, or educational films. Some of the aforementioned composers scored electronic soundtracks for dozens of Soviet films during the 1970's.

As the 1980's approached, more and more electronic musical instruments could be found on the Russian black market—especially in Moscow. Synthesizers became more common in approved Soviet music groups, in movie and TV studios such as Mosfilm and Ostankino, and also in Melodia studios—the one and only record label in the Soviet Union. 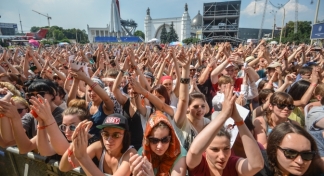 Electronic sounds could be found in official, patriotic Soviet songs, in theatre plays and in cartoons. At the same time, the underground music scene was emerging. This scene would later be called Russian rock, and it included all types of music—from Experimental jazz to Rockabilly.

Among those underground bands were a few who used electronics in their original compositions. This young generation of Soviet, underground musicians was influenced and inspired by Western electronic bands such as Kraftwerk, Depeche Mode, Human League, Eurythmics, Ultravox and Soft Cell.

Synthesizers and drum machines became cheaper and more powerful. Russian musicians were able to gain access to various devices for their home recording session, through the sharing and bartering of equipment amongst themselves. Thus, it was very common that five bands were using the exact same drum machine—a Yamaha RX11, or a Moog synth, for example.

On the other hand, it was almost impossible for electronic bands to perform their compositions live, because of shortages of electronic music instruments and complications with delivery and device connections on stage. Some electronic bands never performed live concerts, and no one knew what they looked like.

In Moscow, the first electronic and new wave bands were 'Center' and 'Nochnoy Prospect'.

In Leningrad (present-day St. Petersburg), the first were 'Televisor' and 'New Composers'. Vova Siniy and 'Brothers in Mind' also emerged in Chelyabinsk.

A few Soviet-made synthesizers and electronic musical instruments were manufactured in the late 1970's and in the 1980's. They were very low-quality and cheap, but they had a kind of distinctive "low-fi" sound.

Computers became a new breed on the electronic music platform, as well.

Digital recording with computers and software-based synthesizers brought freedom to both the old and new generation of electronic musicians. Many clubs were opened in Russia that specialized on raves, acid and all types of electronic music.

Various Russian DJs in the 1990's played various types of electronic music composed by their friends in Moscow and other cities. In Moscow, a club named Ptuch was opened and became famous for raves, so-called acid parties and outrageous fashion shows.

In the 2000's, Internet became a major player in electronic music composition and distribution. Electronic musicians had an opportunity to collaborate with each other though file exchanges via the Internet.

Almost everyone on the electronic music scene in Russia built their own computer-based recording studio at home.

Listen to the best Russian music in the Balalike it podcast!

Today, almost no one is interested in trying to learn how to play guitar, piano, or drums. Young people simply learn music computer software such as Garage Band or Fruity Loops, and they are ready to compose their tunes—which can become very popular among their so-called YouTube generation.

Music production has changed from instrument playing to sound manipulation. At the same time, there is still a movement of experimental and avant-garde musicians in Russia carrying the torch of Karlheinz Stockhausen and other major electronic music pioneers of the 20th century.