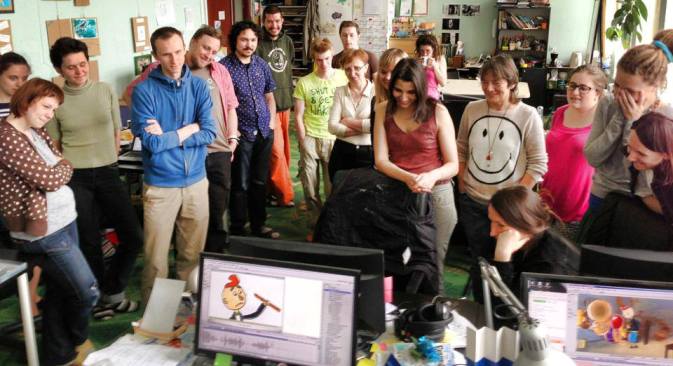 At the end of July, the premiere of the animated series "Flying Animals" will be held. This charity brand is the first of its kind in Russia and, perhaps, in the world too.

The Japanese rabbit Akira is a philosopher who lives in a secluded house in the mountains, takes care of a rock garden, andpractices martial arts, ikebana and calligraphy.

The American horse Jane is the exact opposite — coarse, loud, quick, but cheerful and kind. Having not yet learned exactly how to do martial arts, Jane tries to show the Russian cow Zoe hermoves and receives head injury in the process.

Akira the rabbit fixes her head, both literally and figuratively. This is a summary of the 10th episode of the animated series "Flying Animals," which will premiere in late July.

There is an episode called "Bric-a-brac": At first, the animals think it is a magic word, until it turns out that it means a collection of useless items; foreign animals try to understand Russian; East comprehends West.

The episode was created by the British director-animator and co-author of "Roger Rabbit" and "Casper," Colin White.

His wife, Russian animator Julia Somina, saw the previous episode and was delighted. Since then, she and her husband have been looking for every opportunity to help their colleagues.

"Flying Animals" is the world's first charity brand, operating through the animated series and the toy industry. The money goes to the treatment of sick children.

The idea was proposed in 2008 by the children themselves — patients of the 31st Oncology Department in a municipal hospital in St. Petersburg. The children imagined a cartoon about a magical land where all the animals could fly.

This is a completely new business model, specifically associated with charity. “We do not know anything similar to it,” says Nadia Fedyaevskaya, director of the project.

“In the West, the trendsin charity commerce are thrift stores. Lead singer of U2 Bono and his wife were trying to create a clothing brand,Edun, for charity; the production was in Africa, to create jobs for the population. But if we talk about our specifics — a media brand with an animated series that was created especially for the charity — here we are pioneers.”

“In 2008, the charitable foundation AdVirta believed in the [Flying Animals] project and invested money into it. With this money we created the project, the profits from which went toward the treatment of children with cancer. At the moment, the profit is enough to pay for the treatment of eight children,” Fedyaevskaya says.

The cartoons are created by the St. Petersburg studio Yes. Five years ago, a few professional filmmakers, artists and animators from two large Petersburg animation studios — The Mill and Smeshariks — teamed up to create a new studio dedicated to socially-oriented animation for children.

The production designer and character artist for the series, NastyaVasilyeva and Roma Sokolov, are popular authors of comic books.

One of the directors, Jahangir Sulejmanov, is an artistic director of the metaphysical theatre Morph, and artistic director Mikhail Safronov is now at Lenfilm — a St. Petersburg film studio and the second largest in Russia.

After each episode is completed, they are shown to the sick children. Focus groupsfor the show have responded positively to the brand:

“They're out there drinking tea and the songs are good!”

Despite the fact that cartoons are designed for the little ones, they are also well received by the older children.

2013 Linoleum Festival: The Reanimation of Animation

"I showed cartoons to my 8-year-old son,” says one mother. “He was sitting, watching carefully and smiling. He said the cartoons are kind, the music is nice; he absolutely loved all the animals and could not single outthe best of the best. In short, it is a constant positive! "

Another mother said, "After watching, my daughter asked for wings and said that she wants to fly."

The charity brand is developing: It signed an agreement with the children's TV channel "Carousel," and its souvenirs are selling in St. Petersburg at cultural events.

The project’s principal income, according to Fedyaevskaya, is the sale of the license to companies for the use of the characters. In the fall, “Flying Animals” products will appear in large chain stores.