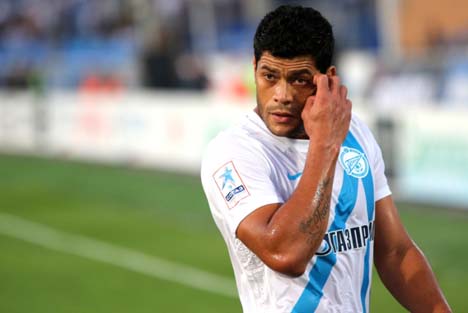 The Brazilian striker Hulk chose Russia, where he will have his financial future secured for the rest of his life. Source: fc-zenit.ru

Despite lavish spending on international players and coaches by oligarch owners, Russian clubs have failed to make a major impact in the Champions League.

According to the authoritative football database transfermarkt.de, the combined value of the Russian Football Premier League players currently stands at around $1.25 billion euros.

When it comes to shelling out on new players, Russian clubs are only behind the top five European football nations (England, Spain, Italy, Germany and France).

Interestingly, only two Russian football teams have ever achieved much in Europe: PFC CSKA Moscow and FC Zenit St Petersburg won the UEFA Cup in 2005 and 2008, respectively.

Truth be told, the UEFA championship is widely regarded as an inferior, second-tier tournament in Europe, and not without reason: it is viewed as a consolation contest for those clubs which feel out of their depth in the UEFA Champions League.

CSKA and Zenit would naturally contest this opinion. However, despite coming on top in the last three Russian championships, the two clubs simply cannot earnestly hope for a bigger league win at this point.

CSKA's top achievement to date has been reaching the Champions League quarterfinals in 2010, whereas Zenit only managed to qualify from the group during this past season – far from the best possible result for a club whose combined annual budgets amount to 200 million euros at the least. 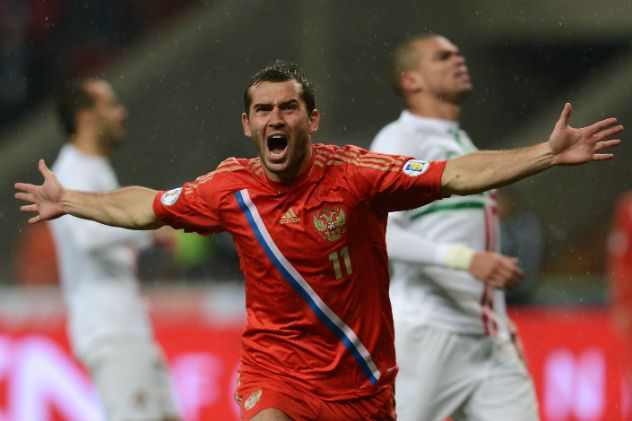 The most peculiar thing characterising the Russian football of the recent years has been the enormous amounts of money pumped into it. The leading clubs, which have secured themselves deep-pocketed owners and sponsors, can afford spending on a level with Juventus, Bayern or Barcelona.

There are two particularly well-off clubs whose affluence eclipses that of even FC Spartak Moscow (sponsored by the oil giant Lukoil), FC Dynamo Moscow (owned by one of Russia's largest banks VTB), and FC Lokomotiv Moscow (bankrolled by the state-owned transport monopoly Russian Railways). These are FC Zenit of St Petersburg and FC Anzhi Makhachkala hailing from Russia's southern republic of Dagestan.

Sponsored lavishly by the gas empire Gazprom, Zenit is known to have spent 100 million euros in just one day: on the Brazilian striker Givanildo Vieira de Souza (better known as Hulk) and on the Belgian centre midfield Axel Thomas Witsel.

Rumour has it that Hulk was paid a bonus of 10 million euros just to sign with Zenit, and that his wages with the club amount to 5-7 million euros a year. Many a player would eagerly give up the dream of ever winning the Champions League in exchange for such a hefty payslip, and would be more than happy to swap the warm climes of Portugal (home to Hulk's previous club) for St Pete's punishing weather.

The buying of Hulk for 60 million euros became a record transfer in the history of Russian football, causing understandable irritation of many Zenit fans. The ordinary St Petersburger will consider a monthly wage of 1,000 euros to be fairly neat, and it would be very hard for the club owners to justify such an exorbitant transfer fee paid for just one player. Not that they actually cared to offer any explanations to their fan base.

Billionaire Suleyman Kerimov is trying his best to match Gazprom's generosity euro for euro. Having purchased little-known Makhachkala-based FC Anzhi, he invested tens of millions of euros in buying international-level players and promptly turned the club from a clear outsider into one of the strongest teams in the Russian championship. Kerimov made the entire world speak of Anzhi by inviting Spaniard Roberto Carlos da Silva Rocha (first as the team's captain and then as its caretaker coach) and Cameroonian striker Samuel Eto'o. The latter's signing in particular made international headlines: never before had the Russian Premier League enlisted such high-level players at the peak of their career. This purchase however cost Kerimov a lot: 28 million euros in transfer fee and, reportedly, a further 20 million euros in Eto'o's annual wages. The Anzhi management does not confirm the latter figure, insisting that the Cameroonian's pay is actually be much less than that.

Having stirred the Russian football community with its reported preparedness to pay enormous salaries, Anzhi immediately earned itself a reputation as a club awash in money. Many have dreamt of landing a job with them, including Dutchman Guus Hiddink. And he was lucky to get a position.

Hiddink first moved to Russia in 2006, after the FIFA World Cup in Germany where the Australian national team had performed very well under his guidance. Moscow then offered him a much more lucrative contract to coach the Russian national team.

Hiddink became Russia's national hero in the aftermath of the 2008 UEFA Cup, where Russia reached the semi-finals for the first time ever. Shortly afterwards however, fortune turned on the Dutch coach as Russia failed to qualify for the 2010 World Cup. Nevertheless, the Anzhi bosses did not seem to care much about this when offering him a contract.

According to rumours, Hiddink demanded 10 million euros per season in exchange for becoming Anzhi's head coach. In reality though he did not fully justify his fee: the club, which had long been striving to get into the Champions League, slowed down significantly by the end of the national championship and finished third in the Russian Premier League.

In addition, Anzhi lost the Russian Cup finals and failed to win a single trophy during that season. Nevertheless, after some pondering, the Anzhi managers renewed Hiddink's contracts and even upped his salary to 12 million euros a year (if rumours are to be believed).

But Hiddink did not enjoy his pay rise for long. On July 22 2013, after the second leg of the Russian Premier League, he stepped down as the Anzhi head coach. Anzhi had by that time scored only one point of the possible six and generally had not been living up to the millions invested in the club. Rumour has it that Hiddink's hasty departure from Russia was not accidental, and that Kerimov may now cut back dramatically on Anzhi funding or even discontinue ownership altogether due to lack of payback from the project.

Nobody in Russia is really surprised at these rumours. Football in this country remains more of a toy for wealthy tycoons and major corporations than anything else. Having an own football club merely emphasises the owner's status; such ownership is usually loss-making but the nice bit about it is that you can pull the plug at any time. Punters' interests come last in this business.

The most expensive players of the Russian Premier League

The Brazilian striker became a star in Portugal's Porto and could have easily moved from there to any of the leading European championships. He chose Russia however, where he will have his financial future secured for the rest of his life.

Selling one of Belgium's most talented players for an astronomical sum will have helped Witsel's previous club, RCS Anderlecht, solve their financial problems for years to come.

FC Shakhtar Donetsk refused to let go of their star player for anything less than the current contract sum. Anzhi was the only bidder to match the challenge; as a result, Willian is playing for Makhachkala and not for a leading English club which had been very much interested in the player.