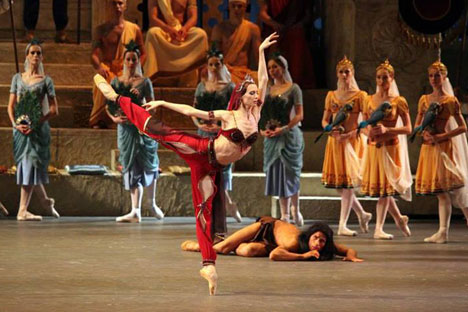 On July 29, the Bolshoi Ballet opened its 50th anniversary London season with a performance of Swan Lake on the stage of the Royal Opera House, Covent Garden. The arrival of the Bolshoi dancers has been a regular highlight of the London summer since the company’s first appearance in 1965.

Performers who took part in that legendary tour still recall how astounded audiences mobbed the performers at the Stage Door and even invited them home afterwards. Today, however, London is like a home-away-from-home for the Bolshoi, and the troupe has a better sense of what UK audiences expect. This year’s tour includes a roster of crowd-pleasing hits – unlike in 2006, when an innovative new staging of Romeo & Juliet by Radu Poklitaru and Declan Donellan received a frosty reception.

During the 20 days of its London residence, the company will present The Flames Of Paris, La Bayadère, Jewels – Emeralds, Rubies, Diamonds and Sleeping Beauty in addition to Swan Lake. Tickets for the opening performance as well as all performances featuring ballerina Svetlana Zakharova disappeared within minutes of going on sale.

“Of course, we simply have to present the great classics, because that's where the Bolshoi Ballet's strengths lie, it's what places them among the best. Our public would be sorely disappointed if Swan Lake or Sleeping Beauty weren't in the program,” said Lilian Hochhauser who, along with her husband Victor, plays a major role in organizing the Bolshoi appearances in London.

Speaking about any damage to the Bolshoi’s reputation following the assault on artistic director Sergei Filin this winter, veteran British ballet critic Clement Crisp said:  “There's not a single ballet fan in Britain who would think of revising their opinion of the Bolshoi Ballet because of the difficulties currently swirling around this world-famous theater.”

“Theirs is simply outstanding work. It's work I first saw in 1956, so my love affair with the Bolshoi Theater has been going on for 57 years,” said Crisp. “When the troupe first came to London, it was love at first sight – and bear in mind, that it took place against the background of a bleak political climate. But what we realized was that the politics was utterly irrelevant – we were in the presence of true artistry.”

The company will perform matinees and evenings daily and each ballet will be performed five times. It is the job of the dancers to make the movements look effortless, despite the grueling schedule. “Our profession is about the survival of the fittest,” said prima ballerina Marina Alexandrova, “but the audience shouldn't be aware of it.|”

The Bolshoi Ballet will be in residence in London until Aug. 17. Schedule and ticket information are available at the website of the Royal Opera House.