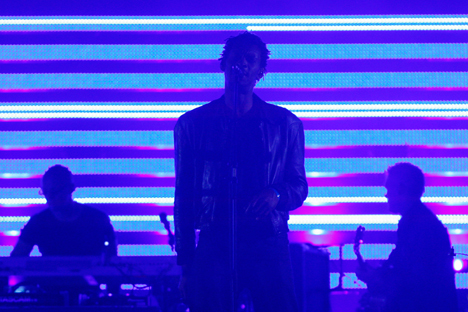 At the recent Mayfield Depot Festival in Machester British group Massive Attack made a performance titled "Everything Goes According To Plan", which is a reference to Egor Letov's most famous song. Source: Reuters

During a recent concert, Massive Attack performed a song by cult Siberian punk band Citizen’s Defense. But did you know that this was not the only instance of Western (and Eastern) artists happily singing Russian songs?

During a recent concert, Bristol trip-hop group Massive Attack performed a song by cult Siberian punk band Citizen’s Defense. The event electrified fans: It turns out that, not only are we Russians captivated by Westerners, but sometimes they are captivated by us.

And yet this was not a unique instance of Western (and Eastern) artists happily singing Russian songs — there are actually many examples of this.

At first, this phenomenon related to songs like “Kalinka,” “Katyusha” and “Moscow Nights.” Romantic ballads have been particularly popular: The most famous example is “Those Were the Days” (the Russian song whose title translates as “By the Long Road”), which was performed by Paul McCartney’s protégée Mary Hopkin.

In working on the album, he was aided by lauded Russian rockers Boris Grebenshikov (from the rock group Aquarium) and Ilya Lagutenko (from the band Mumiy Troll). Another album by Almond, “Orpheus in Exile,” was dedicated to the work of Russian singer Vadim Kozin.

The authorship of the gypsy ballad “Two Guitars” has never been ascertained; the only certainty is that it is based on verse written by the 19th-century poet and critic Apollon Grigoriev. The song gained widespread fame, thanks to a performance by Alyosha Dmitrievich and Yul Brynner.

Western audiences were introduced to “Two Guitars” by French cabaret singer Charles Aznavour, who had heard the exalted Russian poet and actor Vladimir Vysotsky perform it in Paris in the 1970s.

The story goes that, after watching Vysotsky’s typically expressive performance, Aznavour, downing a vodka, said: “He doesn’t sing; he vomits.Better than me.” Soon, Aznavour’s version of the song came out:

Celebrated singer Serge Gainsbourg did a Russian rendition of “In a Forest near the Frontline”—a piece by composer Matvei Blanter and poet Mikhail Isakovsky.

Following in her father’s footsteps, Gainsbourg’s 13-year-old daughter Charlotte also sang the song. Her version appeared on the 1986 album, “Charlotte for Ever,” under the title “Zéro pointé vers l’infini.” While Isakovsky’s text is about soldiers on the eve of a battle, Charlotte’s more philosophical lyrics focus on how “zero points toward infinity.”

A portion of “May There Always Be Sunshine” was written by a four-year-old boy, Kostya Barannikov, in 1928. In 1962, the poet Lev Oshanin penned the lyrics and Arkady Ostrovsky composed the music for the work, which was first performed that year at the EighthWorld Festival of Youth and Students in Helsinki.

The singer, Tamara Miansarova, took the gold medal at the competition. She later recorded the song in 11 languages.

Tamara Miansarova. May There Always Be Sunshine. Source: YouTube

In 1964, a young Swedish songwriter named Benny Andersson recorded this composition with his group, the Hootenanny Sisters, under the title “Gabrielle.” The meeting between Andersson and Björn Ulvaeus that would lead to the formation of the international sensation known as ABBA would not occur for six years, but “May There Always Be Sunshine”/ “Gabrielle” gave Andersson his first taste of glory—the song shot to number four on the Swedish charts.

Numerous artists have covered songs by one of the most popular Russian rock musicians, Viktor Tsoi — the leader of the group Kino who died tragically in 1990. Especially successful was “Changes” from the cult perestroika film “Assa.”

As Tsoi was half Korean, it is not surprising that there has also been interest in him on that peninsula. A popular South Korean group, the Yoon Do Hyun Band (also known as Yoonband or YB), recorded a cover version of “Blood Type.”This song plays during the close of the popular Soviet film “Needle,” to which Kino owes much of its popularity in Russia.

Another song on this film’s soundtrack is “A Star Called Sun,” which has been covered by the Spanish-American group Brazzaville. The group’s leader, David Brown, who, like Tsoi, grew up listening to such performers as David Bowie and The Cure, is hardly a first-rate musician.

Nevertheless, Brown’s sentimental-romantic manner suited the tastes of the hipster sub-culture that was coming into being in Russia at the time. He recorded his own version of Tsoi’s song in 2006.

Brown had heard the song shortly before that in the location of the future Olympics — the city of Sochi, a provincial resort area known for its diverse music scene. While there, he may also have come across “Green-Eyed Taxi,” which he also sang in English, much to the delight of his inordinately sentimental devotees.