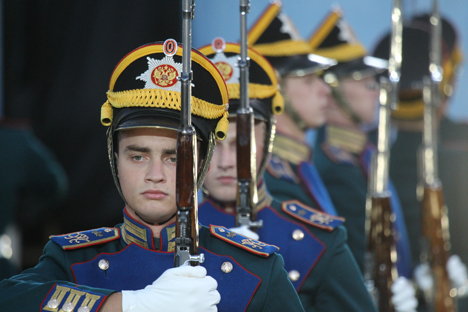 The International Military Music Festival “Spasskaya Tower” takes place at Moscow's Red Square on Sept. 1–8, 2013. The units of the State Honor Guards and the leading Russian and foreign military bands traditionally participate in the festival.

In accordance with tradition, the opening of the festival in 2013 will be held within the framework of the Days of the City of Moscow. The daily festival audience in Red Square will exceed 7,000 people, and the entire festival audience is expected to be over 56,000 people—over 100 million people, if Internet and TV viewers are taken into account.

RBTH asked conductors of the orchestras taking part in the festival to talk about their plans and hopes.

“The Massed Pipes and Drums from the British army are honored to be invited to perform at Spasskaya Tower—the Kremlin military festival on the renowned Red Square, before the magnificent backdrop of St. Basils Cathedral.

The Massed Pipes and Drums band from the British army. Source: Press Photo

“The Massed Pipes and Drums will provide a marching display of Scottish music and highland dancing.

“The military tattoo is a wonderful opportunity to demonstrate pride and patriotism for one’s country; it also provides a beautiful military spectacle with stunning music and ceremony.

“The Scottish Massed Pipes and Drums from the British army look forward to performing at Spasskaya Tower with the outstanding military bands from the Russian armed forces.”

“We expect to bring health, strength and harmony to the people of Russia and the world through this festival. Our program is called ‘The Harmonious Rhythm of Shaolin.’”

“We are expecting an atmosphere of celebration and peace that will allow us to proudly represent our country while coming together with other cultures to mark this prestigious event in Russia. We will play a variety of Arab and international music, as well as perform various traditional dances and music routines that represent victory, pride and courage.

“For us, the music festival is a great platform to display our pride in the culture and heritage of the United Arab Emirates, while also being able to experience and appreciate the national, artistic and military traditions of all participating countries, in the spirit of peace.”

“The festival is a high-level show. This is great challenge for us to play there. We should be in [our] best trim to be liked by audience. Spasskaya Tower is a chance to demonstrate our national culture, too, because we are kind of French ambassadors abroad.”

“For both Russia and Japan, we are important neighbors, and we think we will have a lot of opportunities in the future to create a great partnership between us. But, so far, there are only a few interactions between us. So, we hope our dance show will be a reason of our friendship to become better and better.

“This time, we will dance with Sansa-Dram. The dance will be very traditional, because it has history from the 16th century.

“When we had the earthquake in 2011, Russia gave us huge support with a warm heart. This time, to repay this favor, and also to better the friendship between Russia and Japan, we will accept your invitation.

“For us, attending the Spasskaya Tower festival will be the meaning of upward. We really think this is a precious opportunity.

In the heart of the International Military Music Festival “Spasskaya Tower”

“Therefore, we think attending this event gives us more mutual understanding and more communication. But it also creates real peace and real respect between both of our countries.”

“Through our performance in the festival, the ROKAF band hopes to introduce our traditional Korean culture indirectly to everyone. In addition, it is South Korea's and Russia's 23-year anniversary of our diplomatic relations, and [we] hope to establish a cultural exchange between our two countries in the future.

“For the festival, we have prepared music performances of various genres, from Russia's own composer Modest Petrovich Mussorgsky, ‘Pictures at an Exhibition,’ to the greatest Korean YouTube star Psy's Gangnam Style, to Korea's traditional Arirang music, and so on. We have prepared programs for the audience to join the ROKAF band and enjoy its performance.

“The ROKAF band is composed of a variety of genres—such as a concert band, marching band, swing band, chamber, magic, traditional music, etc.—to uplift our soldiers' morale and perform the role of cultural ambassadors for various events domestically and internationally.”