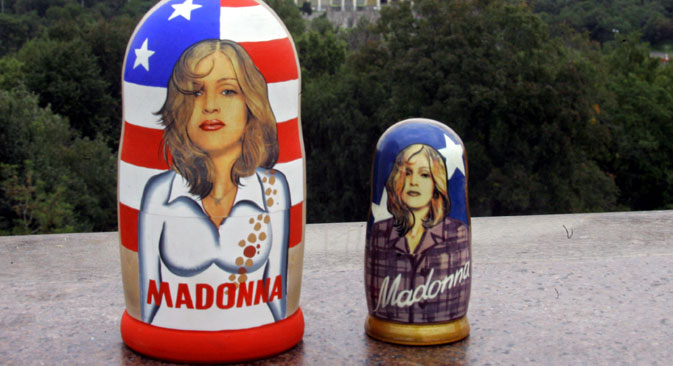 In Russia, foreign artists face a number of problems, including the conclusion of employment contracts for tours. Source: AP

With visa regulations not catering for their needs, Western artists wanting to perform in Russia face big obstacles. Meanwhile, main representative of the entertainment sector in Russia call for changes in the current system.

However, no other type of visa, including business or tourist, entitle artists to come to Russia on a tour. The only option is to apply for a work visa through the Federal Migration Service (FMS), which is an extremely complex process.

First, it takes a long time - about half a year. Second, this artist has to terminate all contracts in his/her home country. It is hard to imagine that Madonna would terminate contracts with her agents for a tour in Russia.

Russia Beyond the Headlines collected the impressions of some of the main representatives of the Russian entertainment and cultural scene on the current situation.

First Deputy Minister of Culture Vladimir Aristarkhov: “I would not confuse the cultural ties that Russia has successfully maintained and developed with the majority of states, and show business. The support of show business is not included among the tasks of the Ministry of Culture. We are ready to support the performances of talented artists, but do not have the right to, and will not, engage in violations of the law. I believe the Federal Migration Service should come up with proposals so that this situation may be resolved.”

Edgard Zapashniy, general director of the Moscow State Circus: “At the beginning of the year, Italian trainers experienced arrived one week late, because of visa problems. Now, on the eve of the International Circus Festival, which will take place in October, we are working on concluding contracts with artists from more than 15 countries, and face daily challenges. We are offering half-year contracts, and if we tried for humanitarian visas, we would be in violation of the law. A working visa is extremely difficult to obtain, as it requires the termination of contracts with foreign agents. Since all artists work with several agencies, major problems arise. Moreover, if the replacement of an artist or someone on the permanent staff is needed, getting a work visa becomes impossible.”

Andrey Klyukin general director of the entertainment company J Group and “Wild Mint” Festival organizer: “At the (note of the editor: Wild Mint) festival, we present the cultures of many different countries. Over the years, we have worked with many embassies, and we bring artists into this country within the framework of cultural exchanges. However, when it comes to ordinary commercial concerts, organizers do face visa problems. We cannot simply keep on refusing international stars from the world of opera, ballet, jazz, pop and rock music wanting to come here on tour.”

Dmitry Sarayev, head of promoted company RIFF Concert Agency: “In all civilized countries, artists are given special visas that are issued using a simplified scenario. Now we have to resort to tricks in order not to break the law and be able to get our work done, because artists do not have much time to work on getting visas. The usual visa types simply do not take into account the challenges faced by them.”

Ilya Bortnyuk, general director of St. Petersburg-based music events company Light Music: “A businessman who comes for six months, and an artist coming for two days – are two fully different things. If a work visa becomes the only option, artists will simply stop coming here. To obtain a work visa, you need half a year, and it costs a fortune. We must understand that the majority of artists who come to club concerts get about € 200–300 for one performance. To get a visa would cost more than this, and they simply will not come here. In the end, the audience will suffer, as well as the country's reputation.”

Eduard Ratnikov, president of Moscow-based concert agency TCI: “I have almost never applied for cultural visas for artists, always using business visas instead. However, not everything is well here either – and there is plenty to complain about. Our Federal Migration Service still has not drawn up regulations for artists. They have fully airtight regulations for migrant workers, but these cannot be applied to Madonna, Elton John, Lady Gaga or Rammstein. In civilized countries, they have special visas for artists. These are absolutely logical and straightforward, and this is as it should be.”

Based on materials from Izvestia.