A hitchhiker’s guide to the Russian galaxy 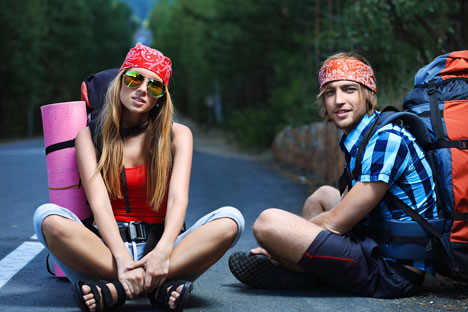 In Russia, hitchhiking is still a self-policed practice - everyone is on their own. Source: PhotoXPress

Hitchhiking in the world’s largest country can be a thrilling experience. Gathering bits of advice from Russia’s most experienced travelers, RBTH delves into the history and local habits of this adventurous mode of travel.

In recent years, most of the urban population of the world has become caught in a travel frenzy. With the lowering costs of tickets and hotels, people have begun to travel frequently and extensively.

While casual travelers are often fond of their “all-inclusive” holiday packages and standard tourist itineraries, others prefer more flexible and adventurous travel options – some that might be less comfortable, but that at the same time allow to know the country of destination on a much deeper level.

Hitchhiking is by all means the cheapest and the most exciting way of traveling, as it preserves the genuine spirit of the road. By surfing the Internet, one realises instantly how popular hitchhiking is - there are plenty of online diaries documenting the stories of European hitchhikers in East Asia and of Russian hitchhikers in India and Africa.

To avoid trouble, attentively assess the driver whose car you’re entering, and don’t hesitate to refuse the ride if you don’t like him. Source: PhotoXPress

Recently, it has become extremely easy to run into posts written by English-speaking hitchhikers detailing their trips to Russia.

Hitchhiking was first introduced in the USSR in the early 60s. Rumor has it that Soviet leader Nikita Khrushchev learned about hitchhiking on his journey to the United States in 1959 and decided to plant this idea on Soviet soil.

In 1965 the Central Council for Tourism presented a hitchhiking program, called “Avtostop” - the name that identified hitchhiking in Russia for the years to come. According to the program, every traveler of 16 or older could acquire a set of avtostop tickets, which were to be filled in by the drivers giving the travelers a lift to their destinations, charging a nominal 1 ruble for every 300 miles.

By keeping the tickets, drivers could also a lottery. Hitchhiking championships were conducted, and travelers could even buy special road uniforms. The program is known to have been active in three Soviet republics considered to have a high tourist potential – Belarus, Ukraine and Latvia.

Read more: Traveling with two feet and one thumb

Two years later, the program was cut down, but hitchhiking lived on to become the favorite mode of travel for Soviet students and hippies.

As the community of hitchhikers grew, the Leningrad League of Avtostop, an organization that facilitated the exchange of experience and travel maps, was formed. Founded in 1978, it became the first hitchhiking club in Russia.

Its founder, Alexey Vorov, traveled over 600,000 miles around the globe. Another club, the Moscow School of Avtostop, was founded in 1994 by Valeriy Shanin. The newest and most prominent club, the Academy of Free Travel (AFT), was formed in 1995 by Anton Krotov, the 37-year old guru of Russian hitchhiking, who has been traveling since he was 14.

AFT members have organized hitchhiking expeditions across Russia and to Iran, India, Africa, China... Currently, Russia is the only country in the world which has multiple active hitchhiking clubs.

When contacted by RBTH, Krotov offered a bit of advice to foreign hitchhikers that want to explore the country. His first tip was to plan a long stay. Russia is a vast country with an enormous set of roads.

While federal highways are mostly in good conditions, they get worse once one moves to the regions - so it’s always good to expect the journey to take a little longer than planned. To travel faster it’s best to take routes between large cities. One should also make sure to take a map with them and to learn some essential Russian vocabulary to communicate with the drivers.

As Krotov argues, it is almost a crime to take avtostop just as a free-of-charge way of traveling. A passenger on a hitchhike gets a free lift, while the driver gets the company and entertainment he needs to stay awake.

Hitch-hiker Odyssey from west of Russia to the east

Meanwhile, both get to share unique experiences and thoughts. In Russia, as anywhere else, it’s impossible to hitchhike and not talk to the driver. An old proverb says “One’s tongue can get one all the way to Kiev” - and with hitchhiking this becomes extremely true.

Hippies were the pioneers of Russian hitchhiking. They even coined a Russian word for a road story – tyelega (literally, a cart). A tyelega is a story, true or fictional, but always exciting, told to the driver during the long ride.

The avtostop professionals advise to try to get the driver to tell his own story, so you can sit back and relax. Unfortunately, it might not be as easy to find an English-speaking driver. If you are traveling alone, you will have to know a bit of spoken Russian. Or you can always take a Russian-speaking companion with you. Incidentally, pairs often travel faster, especially in a boy-and-girl pair. Drivers are often concerned about safety and might be afraid of giving a ride to two grown men.

In Russia, hitchhiking is still a self-policed practice - everyone is on their own. To avoid unnecessary attention, leave your expensive clothes and camera at home. According to Krotov, however, you shouldn’t believe all the horrible stories about Russian mafia and the like.

To avoid trouble, attentively assess the driver whose car you’re entering, and don’t hesitate to refuse the ride if you don’t like him. Also, don’t walk around cities and towns at night. The good news is that as a foreigner, you’re being protected by the respect and curiosity for people from abroad that the majority of Russian people feel.

Drivers may offer you food or even a stay at their homes, remembering the old Orthodox hospitality tradition. If you are being offered alcohol, however, it’s better to refuse – staying sober is the keystone of a successful voyage.

There is some local wisdom that hitchhikers would want to be aware of, if they decide to travel across Russia. Here are a few tips:

Tales from the Gipsy Cab

- In Russia the international “thumb-up” sign is mostly unknown. Just stretch out your hand.

- Keep your documents handy and in a waterproof plastic bag.

- If your driver got fined by the road police, it would be appropriate to throw in your share. Same is true for petrol.

- Make sure that your clothes have retroreflectors to hitchhike safely at night.

- Russia lacks a serious network of hostels. Try searching for local hosts online, but take a sleeping bag with you, in case you have to spend the night outside. Sleeping by the road is quite safe, provided that you are not visible.

- Most of all, have your heart and mind open – the people you will meet along the way will most likely not help out of financial interest. Remember, hitchhiking is a great way not only to explore a country, but also its people.