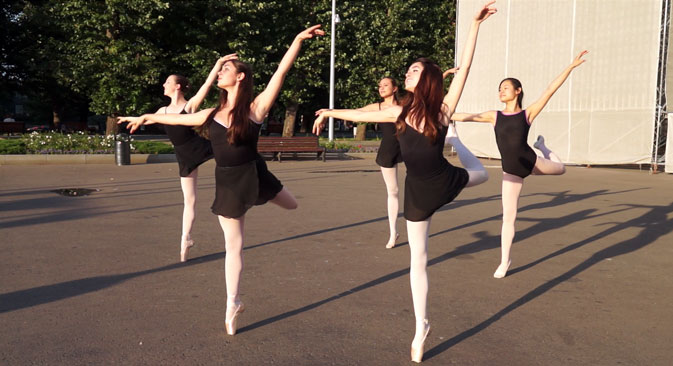 A U.S.-funded ballet and language program hopes to improve the image of Russian ballet while warming relations through exchange.

For the past month, 17-year-old July Yinger of Denver has been in Moscow, training at the world-renowned Bolshoi Ballet.

Her day begins formally at 9 a.m. with three hours of ballet and gymnastics, followed by four hours of Russian language study. Afternoons and evenings are full of excursions around Moscow.

Despite the rigorous schedule, Yinger and 14 other American students studying at the Bolshoi in a special summer program said they are very inspired and highly motivated by this once in-a-lifetime opportunity.

“Some Russian ballet dancers came to the United States and they inspired me: Natalia Osipova, Svetlana Zakharova, Julia Gorchakova – they are very famous in the United States,” Yinger said. Seeing those dancers inspired her to apply for the prestigious youth scholarship to Study Language Abroad Program for Youth (NSLI-Y) funded by the U.S. Department of State and administrated by the New York-based Russian-American Foundation (RAF).

Yinger has been studying ballet for about 12 years. As a U.S. citizen, she is eager to learn more about Russian culture and “become more open-minded….My ballet teacher is Russian. I might be more around Russian dancers in the future when I dance and this experience will definitely be very helpful,” she explained.

Anna Pearson, 17, came to Moscow from Michigan for the same reasons.  “I grew up with Russian ballet and have been taking it since I was 7 year old,” she said.

When she was 10 years old she traveled to St Petersburg and the trip had a big impact on her. “I was completely amazed by what I saw when I was really young. … The architecture. The people. The culture. The food. Just the whole experience was really amazing! From that moment I’ve always been more interested in Russian culture.”

After she returns, Pearson plans to share her experience with Americans and “introduce them to the benefits of travelling globally” to root out “stereotypes, especially in such a globalized world.”

Likewise, Riana Erickson from California hopes to bring the U.S. and Russia closer.

“Previously, the U.S. and Russia had not been too friendly with each other and now it’s really important to connect because you have to know where people come from and how their culture is different,” she said

Struggling with the Russian language

Kalea Power, 17, came to Moscow from Los Angeles. Russian ballet technique is not the only reason why she decided to participate in the program. Speaking Russian fluently is another goal for her.

“I’ve been training with Russian ballet teachers since I was 12,” she said. “The Russian language was the only means of communication with my teacher. I had to adapt– even though I didn’t completely understand what the teacher was saying to me, you tell by using body language and gestures I could associate certain words with gestures. In that way I had a pretty good introduction to Russian.”

In September Power is going to study at Princeton University.

Riana Erickson of California also understands all the benefits of “being bilingual.”

“I definitely want to continue to learn Russian in college because I would love to speak Russian fluently,” she said. “I have a couple of Russian friends in the U.S. and a Russian teacher and I would love to talk with them in Russian after six weeks of Russian courses.”

Alana Krafsur, another participant of the program, has a different reason why she decided to travel to Russia.

“I’m half Russian,” she said. “I don’t really know about my heritage and so being able to come to Russia…helps me learn about my culture. And also I think in future I will be able to converse with ballet dancers in Russian if they don’t speak much English.”

Pennsylvania’s Ariel Burde, 16, also has some Russian ancestry. Her great grandfather lived on the border with Russia and he immigrated to the United States alone leaving the rest of his family. “He lost contacts with his family until about 20 years ago,” she said. “And my great aunt found them and we are now in touch with [our Russian relatives].”

This surprising discovery had an impact on her life, she said, and she decided to get in touch with her relatives “through the Russian language and culture,” she explained. “I really want to continue this experience.”

Living in a Russian host family

During the weekend, the participants of the program live with their Russian host families who give them an opportunity to experience how ordinary Russians live.

“My host mother doesn’t speak English at all,” said Erickson.  “I speak very little Russian. So, it’s a challenge for me. At the same time it’s a very great experience. It’s very difficult to talk but sometimes we use a sign language.”

According to Rina Kirshner, vice president of the Russia-American Foundation, such cultural exchanges are crucial for U.S.-Russia bilateral relations because they “bring American youth to Moscow not as "visitors" but as locals - so they understand modern day Russia, so they live with actual Russian families and most importantly so they learn the language.”

The mystery of the Russian ballet technique

“There are some similarities between language learning and dance – both have hard techniques you have to learn and it takes a lot of practice,” said Pearson. “The only way to do it is to immerse into the culture. So, being here in Russia is very helpful!”

“A class with Russian teachers speaking in Russian…creates a new atmosphere and a new approach,” she explained. “What we are missing out in the U.S. is that we don’t have the purity of the Russian technique. Yet studying the Russian language we feel like we get authenticity of ballet.” She said that for her the Russian technique offers more expressive movements with the arms, head and upper body.

“And there is more focus on artistry,” she added. “I feel sometimes other ballet techniques lose this kind of artistry while the Russian ballet technique maintains this artistry and this one of the reason why I love it.”

How ballet can strengthen U.S.-Russia ties

While U.S.-Russia collaboration is declining in some areas and the Bolshoi Theater’s image has suffered from recent scandals, the Russian American Foundation endeavors to strengthen cultural ties between countries.

“The foundation of the great respect that our participants share for ballet - and Russia's contributions to the ballet world past, present and future - makes this program so effective,” Kirshner said.

She also pointed to the importance of the involvement of government and business in educational and cultural exchange.

“We would be thrilled if the Russian government would support such collaboration by sending Russian ballet students to the U.S. to study,” she said. “RAF already brings every summer 8-10 participants on scholarships - but we could host many more if both governments would expand the program.  And if not government, perhaps businesses and individuals who are involved in Russian-American commercial relations and know the importance of expanding personal, cultural and pre-professional horizons of the youth of both countries.”

Launched as part of a U.S. Government initiative in 2006, NSLI-Y seeks to increase American engagement with native speakers of critical languages by providing formal and informal language learning, and an intensive cultural immersion experience. The goals of the NSLI-Y program include sparking a life-long interest in foreign languages and cultures, and developing a corps of young Americans with the skills necessary to advance international dialogue in the private, academic or government sectors.

“The NSLI-Y Program was launched by the U.S. Department of State, Bureau of Educational and Cultural Affairs in 2006 as a general cultural and language immersion program,” said RAF Vice President Rina Kirshner. “In 2010 RAF submitted the idea of being allowed to design a special NSLIY Program for ballet dancers which would also include ballet training.”