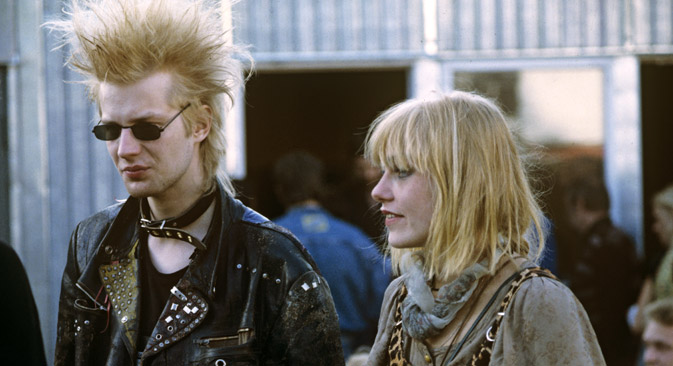 Punk was an obvious choice for many Soviet youngsters, since they felt exactly the same as one of punk’s main mottos — “No future.” Source: RIA Novosti

Russian punk rock has come full circle in the last 30 years. Having started as an underground statement—"Us against the world"—in the early 1980s, it turned into full-blown, commercial and radio-friendly tunes in the 1990s and became a favorite of nightclubs and “new bourgeois” parties in the 2000s. Now, Russian punk rock is back in a politically charged and nonconformist style led by Pussy Riot.

Every major pop-culture movement that started in Western Europe or in the United States found dedicated followers in the Soviet Union — and later, in Russia — within a year or two of its emergence.

Punk was no different. As it was with rock music in the late 1960s, when the first rock albums, magazines, blue jeans and platform shoes hit Moscow's black markets, the same things happened in the late 1970s, with the first punk albums, leather jackets and punk magazines.

Soviet teens of the 1970s had already grown tired of hard-rock music and fashion, as well as the “Love and Peace” lifestyle of hippies, so punk was a breath of fresh air for them.

Young Soviets could have their own punk identity, which was rebellious and, more importantly, very different from their older brothers and sisters.

Looking back on Moscow's underground music scene in the late 1970s, it can be said that there was a strange dilemma fornew bands trying to decidewhich style of music they should adopt and develop — disco or punk.

Both of these new music trends reached the Soviet music community almost at the same time, in the latter half of the 1970s.

Disco turned into mainstream and was even exploited by official Soviet composers who incorporated disco beats and rhythms into pop and, sometimes, patriotic songs about the working class and communist youth.

Punk was an obvious choice for many Soviet youngsters, since they felt exactly the same as one of punk’s main mottos — “No future.”

Punk culture was a very natural thing for many Soviet boys with any level of intellect and anger. The main difference between British and Soviet punks in the late 1970s was that, in England, punk was protesting and fighting against a conservative, upper-class establishment, while,in the Soviet Union, everyone was equally poor.

The only attitude Soviet punks were able to adopt was, "Us against the world," or, "Us against everybody else."

Soviet youth tried to imitate the look and style of Western punks. Shortages in every aspect of the ordinary Soviet citizen’s life, however, pushed people to find unusual ways to look like real punks.

For example, Soviet youth replaced the heavy Doc Martins of Western punks with military boots that could be purchased in any military supply store — especially the chain Voentorg — whose outlets could be found across the Soviet Union.

The same thing goes for punk jackets, which Soviet youth created from the black navy jacket that could be found at the same Voentorg military supply chain. Almost anything could be used for a punk look if some creativity was put in that resonatedwith other punks.

The degree of criticism toward punk music in the Soviet papers was much higher than in similar articles about The Rolling Stones a few years before.

For Soviet propaganda, it was a major issue that Western punks used the swastika and Nazi clothes as part of their outfits and fashion statement.

Soviet ideology and censorship, however, had no clue that usage of Nazi outfits was a part of the punk attitude — slapping society in its fat, rich face.

Soviet propaganda was unable to figure out all the details of punk culture and became the proverbial elephant in the china shop.

Thus, authorities simply put a big stamp of disapproval and censorship on the whole punk thing — just as they banned the glam rock band KISS, because the last two letters of the band’s logo resembled symbols of Hitler's Schutzstaffel (the SS) and censors decided that the members of KISS were Nazis.

The Soviet Union’s punk bands found themselves between a rock and a hard place in the early 1980s. The official Soviet system considered them enemies of the state, and underground music periodicals produced on typewriters (“samizdat”) were publishing very negative articles about punk bands.

The vast majority of Soviet journalists and critics were hippies or fans of hard rock and blues; sometimes, they simply just did not understand the new punk idea.

Most of the earliest concerts of Soviet punk bands were played in private apartments in front of a few friends.

One of the first punk bands in the Soviet Union was AU, or "Avtomaticheskye Udovletvoritely" (Automatic Satisfiers), which was founded in 1979 in Leningrad.

The leader of the group was Andrei "Svin" Panov (1960–1998), whose nickname meant “pig” in Russian. Most of the group’s earliest performances took place in private apartments, until they joined the official Leningrad's Rock Club and were able to play on a proper stage during its festivals.

Svin used various types of punk antics during concerts and public appearances: Sometimes he would even urinate in a glass and drinkit during the band’s concerts, just to put viewers in a state of shock.

Panov was never really a part of Leningrad's underground music community, because he did not have much in common with other musicians.

The band’s leader himself once said that AU was more like an anarchy rock band than a punk group. AU’s song consisting of only one word — “Plevat,” which roughly translates as “I don't care” — goes to prove his words.

At the same time, a band called DK — an abbreviation that left many people puzzled about its actual meaning, with guesses ranging from a “Divan Krovat,” meaning “sofa bed,”to “Devichyi Kal,” meaning “a girl’s feces” — emerged in Moscow.

DK was not exactly a punk band like the Sex Pistols, but they had songs that were very innovative and smart. The group’s leader, Sergei Zharikov, was an intellectual who published a samizdat magazine about culture, society and ideology.

A special kind of Soviet punk movement called “Sibirskypank,” or Siberian punk, formed in Siberia. The remote location far from the two major Soviet cities of Moscow and Leningrad helped develop a unique version of punk. Siberian bands were not so much into fashion statements, and their sound was closer to hard rock.

The most famous punk band from the Siberian city of Omsk was “GO,” or “Grazhdanskaya Oborona” (Civil Defense). Many fans simply called the group “Grob,” using the first two letters from the two words of the band’s name. Appropriately, “Grob” means “coffin” in Russian, reflecting the punk attitude of the band’s followers.

The group’s leader, Yegor Letov (1964–2008), is considered by some to be the grandfather of Russian punk, due to his considerable influence on many punk groups.

The life of underground bands in Siberia during the 1980s was much harder than in Moscow and Leningrad because of a stricter local censorship.

After Grob gained some popularity in many cities across the Soviet Union, Letov was politically repressed by the local government and declared “socially dangerous.”

He also was forcefully placed ina mental hospital for three months — this was a common practice in the Soviet Union, used to suppress dissidents and present them as mentally ill people.

Ordinary Soviet citizens usually conformed to policies of the Communist party and the government; Letov, however, almost went blind from the heavy drugs that were administered to him in the hospital.

The music and lyrics of Grob were rough, energetic, simple and blatant. In the 1990s, Letov joined the new National Bolshevik Party (NBP) and became one of its leaders.

Some of NBP’s political views and tactics were relatable to the lifestyles of punks and nihilists — i.e., “Eat the Rich.” The party’s flag was red with a white circle surrounding a black hammer and sickle, which reminded many critics of the Nazi flag. NBP was labeled an extremist organizationand banned in Russia in 2007.

After the Soviet Union’s collapse in the early 1990s, punk went commercial worldwide. In America, the new generation’s punk bands — Nirvana, Green Day, etc. — were selling millions of albums and playing at sports stadiums in front of thousands of fans.

In Russia, these types of punk bands received a lot of airtime and were often shown on TV; a few of them were nominated for various music awards.

No one was protesting against anyone else or anything anymore, while Russian pop-punk bands comfortably toured through the country making good money onthe exploitation of the punk look and lifestyle.

Suddenly, something changed on the Russian punk scene at the end of the 2000s, when a new generation of politically charged punk bands that condemned commercialization of music and culture emerged.

These new groups do not want to play their music at traditional nightclubs, but they are willing to perform at protest rallies and other public events.

The Pussy Riot song performed in Moscow’s main cathedral turned into a worldwide scandal. Nonconformity is back in Russian punk rock and the gloves are off!

From 1990 to 2008,Shumov lived in Los Angeles, California, graduating from the California Institute of the Arts with a master’s in fine arts in 1998.

Vasily has presented numerous solo and group exhibitions featuring his photo and video artwork. His recent personal photo art exhibition was held in April 2013, at the Central House of Artists in Moscow. In June 2013, he performed with his band Center at PAX Festival in Helsinki, Finland.