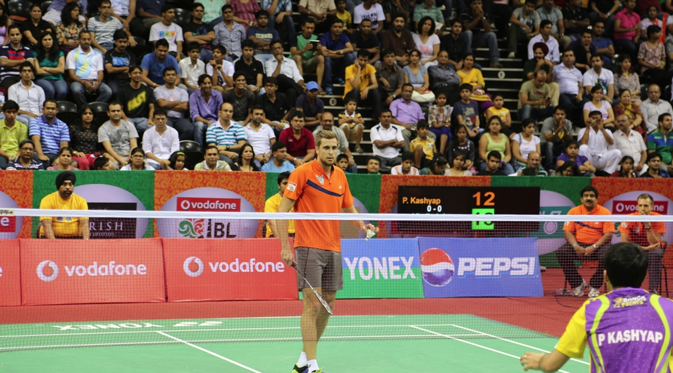 In an exclusive interview with RIR, the Russian badminton champion talks about his love of Indian food, the country’s new badminton league and the future of the sport in Russia.

The first Vodafone Indian Badminton League (IBL) is taking place this month in Delhi, Lucknow, Mumbai, Pune, Bangalore and Hyderabad. The foreign competitors include Vladimir Ivanov, Russia’s badminton champion and medal winner in the European championships, who beat Banga Beats' icon player Parupalli Kashyap 21-18, 21-18. In this interview he talks about his first match, his love of Indian food, IBL and badminton in Russia

Was it difficult for you to beat Parupalli Kashyap in your first match?

It was a serious victory for me. I beat few people from the top ten, and Parupalli Kashyap was number four on that list. I wasn’t really supposed to play in the singles, but Lee Chong Wei (the current world No. 1) didn’t come.

He’s not coming till the next match. Of course, I had been training before the match and I was sure of my own strength, but there was initially some psychological pressure. In the first game I found him difficult to deal with. When I started falling a long way behind I managed to catch up. I passed the test, and you could say that after that I played in a purely tactical way, on the attack. Before the match I was expecting it to be tough, and so it was easier to play. I was bought to play in the doubles, but I showed what I was capable of. It was my strength of will that won. I was losing almost 2:7 in each game. I played psychologically, to play on his nerves and speed things up.

You got some advice from the German sportsman Marc Zweibler, who also plays for the Mumbai Masters. Are relationships good in the team?

The relationships in the team are very good. Just seven people from Europe were bought to play in the IBL, and I’m glad to be one of them.

Parupalli Kashyap is considerably shorter than you. Did that help?

At certain points. Sometimes I can get the shuttlecock faster. I prefer aggressive badminton, and so that helps me personally. On the other hand, I’m weaker in lots of other ways – coordinating my movements, for example. I have to bend down more. I often have problems with my back. It’s harder to play under the net.

This win was a great achievement for the team, I guess?

Not just for the team, but also for Russia. The whole world follows the IBL, at least everyone who knows about it. These competitions are very prestigious, of course. All the competitors try to show what they’re capable of. You don’t want to let anyone down. It’s a long time since Russia had successes like this in badminton on the international stage. We need to consolidate them with a result. So far we’re doing okay, and we’re going to continue in the same spirit.

How do you find playing in India?

This is the third time I’ve been here. I haven’t managed to get to the Taj Mahal, but I’ve seen a few things. I’m very fond of Indian food, especially in the north – in Delhi and Lucknow. I brought my own manager with me. People say it’s dangerous for foreigners to eat here, but that’s nonsense. Everywhere we go we eat and try something new. The atmosphere is wonderful. I love all those seasonings, and the way they serve you. They’re all very kind. A huge number of impressions.

Have you managed to make friends with any Indian badminton players?

Of course. We all know each other. Competitions like the IBL bring you together. All the Indian lads are great. We play together. We help each other to develop. We share our experience. As I understand it, the two leading players in India are Saina Nehwal and Parupalli Kashyap, and now Pusarla Venkata Sindhu is moving up the rankings. She wasn’t getting these kind of results before.

Saina Nehwal and Pusarla Venkata Sindhu also played on the first day, right before you. Saina Nehwal won 21-19, 21-8. Can you say something about the game?

Yes, I watched that match. In my view it was a psychological battle. Pusarla Venkata Sindhu can’t play against Saina Nehwal yet. Nehwal has huge support, and that puts a lot of pressure on Pusarla Venkata Sindhu. When she’s played against other women her game has been completely different. She plays brilliantly.

You spend a lot of time with foreign players. What is it that’s preventing Russian badminton players from achieving regular success at the international level?

Successes have been few and far between so far. It’s true that in the last three years badminton in Russia has taken a huge leap forward. Today we’re writing its history, and I’m not afraid to use these words. We won bronze at the last Olympics. Before that, no one had ever managed to win a medal. A new era of badminton has begun in Russia, and it’s very nice to be part of that era.

You see how the Indian players, the Europeans and the Russians prepare for the competition. Is there a difference?

The majority of badminton players – the Indians, the Chinese and ourselves – work in the same way now. In Russia right now there’s simply an upsurge in the number of sports schools for children and young people. More and more people are starting to play badminton. That’s a big difference. In China up to a million people in the region might take up badminton every year, while for us it’s a big success to get 20 or 30 players. They have a lot of people to choose from.

Would you advise other Russian players to take part in competitions like the IBL if they got the opportunity?

Of course. People in Russia are very fond of India. I’m not talking about political contacts, I don’t want to get into that: but simply about human relationships. As far as the players are concerned, lots of them were willing to take part in the IBL. You’re defending the honour of your country. Everyone’s looking. Secondly, it’s a good way to make a living. Badminton is becoming a profession.

And what goal are you setting yourself in the sport?

A medal at the Olympic Games, of course.