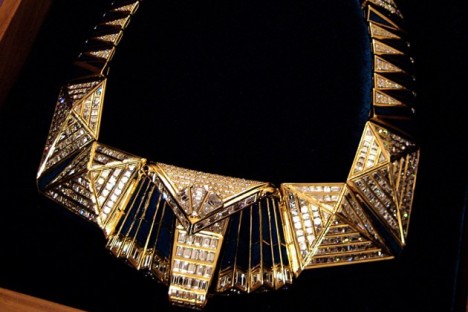 In 1996, Yelena Opaleva's "Sphinx of Giza" won the De Beers diamond international award, which, in the jewelry world, is akin to the Oscar award. Source: Press Photo

Russia is planning to improve its image by reviving the status it once had as one of the world's leading jewelry centers during the time of Carl Faberge, jeweler to the Russian royal court. This will be one of the themes of the International Jewelry Economic Forum, which will be held in Moscow on Sept. 13, 2013.

According to Galina Ananina, general director of the National Collectors' Center for Artistic Works, jewelers' masterpieces are an integral part of Russian culture — starting with the triumphant success of Russian craftsmen at the First World Jewelry Exhibition in London in 1851.

Over the past 20 years, the jewelry industry in Russia has had a number of achievements, not only resurrecting lost technology but even improving upon it. For example, modern jewelers reproduced vessels of the highest quality for the Cathedral of Christ the Savior.

The best examples of the Russian jewelry industry are presented annually at prestigious, international jewelry and clock exhibitions in Vicenza, Basel, Berlin and Hong Kong.

In 1996, Yelena Opaleva's "Sphinx of Giza" won the De Beers diamond international award, which, in the jewelry world, is akin to the Oscar award.

This year, for the second time in a row, the Russian artist and jeweler Ilgiz Fazulzyanov won the Grand Prix and the title of "Champion of Champions" at the International Jewelry Design Excellence Show in Hong Kong.

According to Ananina, the main jewelry centers in Russia are now Moscow, St. Petersburg, Kostroma and Yaroslavl. In addition, diamonds from Yakutia, ethnic-inspired jewelry, and the works of Uralic stonecutters receive prizes at foreign exhibitions.

However, Ananina points out that Russians often do not get a chance to see the modern jewelry masterpieces that are being created in other parts of the country and therefore are not aware of the latest trends in the industry. "As a result, people think that Russian craftsmen make just standard rings and chains," says Ananina.

By her estimate, 20 percent of what Russian jewelry companies produce are exclusive pieces, and 80 percent is for mass consumption, geared toward the consumer with average or below-average income.

The executive director of the Guild of Diamond Producers and Jewelers of the Sakha Republic (Yakutia), Tatiana Kyrbasova, also believes the industry is experiencing a renaissance.

"In Yakutia, jewelry making has age-old roots. The industry experienced a rebirth in the post-Soviet era, thanks to private investors. Also, government support for the manufacturing sector has started to have an effect recently," she says.

Kyrbasova asserts that it is important to ensure the industry continues to have stable work: "Here in Yakutia, labor and energy are expensive. Alrosa [the main diamond manufacturer in Russia] is transitioning to underground diamond mining, which is more expensive. Raw materials needed for jewelry manufacturing — such as diamonds, gold and silver — have gone up in prices." Gem production is currently stagnating, too.

Another problem for the industry is legislation inherited from the Soviet Union. As Vasily Vlasov, the chairman of the Diamond Council of the President of the Republic of Sakha, told RBTH, in 2003, precious metals and stones ceased to have a particular currency valueand became a regular commodity — as they had in the Soviet Union. Still, the laws have not changed.

"In order to start jewelry manufacturing, the premises must be equipped appropriately, there must be a concrete safe, metal bars on the windows, safe doors, security during transport, etc." says Vlasov. All of this impacts the cost of production.

In addition, there are restrictions in the Criminal Code for working with precious metals and stones.

All emeralds, sapphires, alexandrite and other stones are brought in from abroad and are subject to taxes and duties equal to 33 percent of the total cost, explains Vlasov.

Moreover, the cost of producing diamonds in Russia is very high, due to the mining techniques and the high labor costs. It is not even profitable to manufacture small diamonds, but these are the ones that are most in demand, observes Vlasov.

"They buy them up in China and India for most of the jewelry, adding the same 33 percent to the cost. There are also problems with sales within the country. For example, Alrosa sells diamonds tax-free to its foreign partners, and here with a value-added tax," Vlasov says.

He noted that they have been trying to change these conditions for the last 10 years, but they do not always receive support from the Russian government.

More: Russian jeweller recreates the Amber Room in his workshop

With the help of the International Jewelry Economic Forum, which will be held in September, they want to draw attention to the industry and to solve the problems that have built up.

A large number of foreign delegations will take part in the forum, among which will be representatives of the World Jewelry Confederation (CIBJO), heads of the national associations of jewelers from countries around the world, as well as representatives of Russian jewelry companies and regional associations, investment companies, auction houses, galleries and exhibition companies, and leading art experts.

During the forum, the All-Russia Charity Jewelry Ball will be held on Sept. 14. There will also be an exhibition ("Russian Jewelry: Traditional and Modern") and a display of the medals for the 2014 Winter Olympics in Sochi.

The International Jewelry Economic Forum, which is being organized by the Russian Jewelers Guild with the support of the Trade and Industrial Chamber of the Russian Federation, is being held in conjunction with the 100th anniversary of the founding of the Jewelers Union in Russia. The event is dedicated to the Russian court’s imperial jeweler, Carl Faberge.