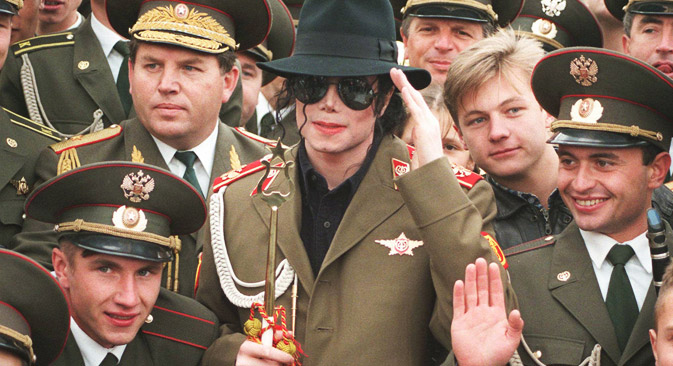 Egor Trubnikoff — the international man of mystery of the Russian filmmaking scene — reveals the motives behind his provocative tribute documentary, which features hand-drawn courthouse comics, explicit talking heads, and priceless MJ-footage found on the dusty shelves amid an office shutdown.

It has been exactly 20 years now since the King of Pop caught Moscow by surprise a couple of weeks after being first publically accused of child abuse and a couple of weeks before the Red Army tanks fired on the Russian parliament as a last farewell to the Soviet era.

Michael Jackson, 35 at the time, touched down for just one show — but the real adventure was off-stage. The “Dangerous World Tour” was true to its name. The Trubnikoff movie has it all: the kids, the army and much more.

RBTH: So you keep saying it was a crate that was believed to be completely lost years ago — and you found those tapes [in it] while moving furniture?

Egor Trubnikoff: Almost, but not really. It wasn’t I who found it. It was the cameraman — the fellow behind the camera Jackson addressed ("You’re in a perfect place every time") when walking near the Red Square at night. 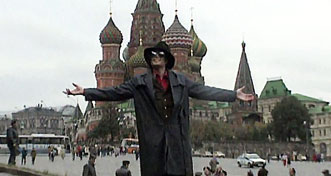 He was, indeed, and thus, from these perfect angles, we’ve got a collection of shots never published: mostly outtakes and cut-offs of what the broadcaster normally takes; a gold mine for historical filmmaking, maybe even for making history.

RBTH: Mr. Jackson from these off-stage outtakes — what kind of person appears in this documentary? Was a dark side revealed?

E.T.: No dark side, no thriller, no clues for the trial — despite the sketches we use to replace missing or copyright-banned episodes. The impression Jackson left after his show is documented as complete and profound misunderstanding, even among the few Russian fans that existed 20 years ago and made their way to Moscow to see the show. If someone came from Mars, the miscommunication couldn’t be deeper.

In this swarm of partly cynical but mostly helpless admirers, Jackson stands as lonely as maybe never before and, afterward, wearing his fancy Peter Pan jacket and [standing] with a jar of homemade cherry jam.

We had to cut the scene where he stays on stage before the opening song, frozen as a still frame for several minutes; and it’s only the rain that makes you guess it’s a live picture, not a photograph.

This episode alone could stand for the entire movie. Alone, a stranger in Moscow: This is exactly how we see him. The people around him are not there, it’s only him. But, as he does not speak for himself, other persons do instead.

RBTH: The people interviewed, who are they? Why exactly them?

E.T.: They are all live witnesses with different angles: kids from the orphanage he visited, now all adults; a retired Russian pop-star who believes Jackson is from another planet; kids that became TV stars and musicians after visiting that show; people given a ticket for free in the crowd; organizers who barely survived the criminal pressure.

More: Why Russia might not see another Madonna tour

And, of course, Mr. Art Troitsky — the guru of pop music journalism who says that popularity should be measured by karaoke. I put them all together in the movie because they never met in real life, maybe only at that show 20 years ago.

RBTH: Any silent heroes that only show-off but do not talk?

E.T.: It’s the city of Moscow itself.  After all the super hits and multi-diamond releases Michael landed by 1993, it seemed beyond any nightmare that a Jackson show could epically fail. It’s the Muscovites — the sincere and naïve Russians of the early post-perestroika — who made the impossible true, so that the Red Army was called in to fill the venue.

RBTH: Would Muscovites of today appreciate being portrayed this way, as those who made Jackson fail?

E.T.: Certainly not: Watching this video could be quite challenging for national pride and self-image. Not sure if the lesson has been learned. If the film and the show itself weren’t there, it could have saved quite a headache.