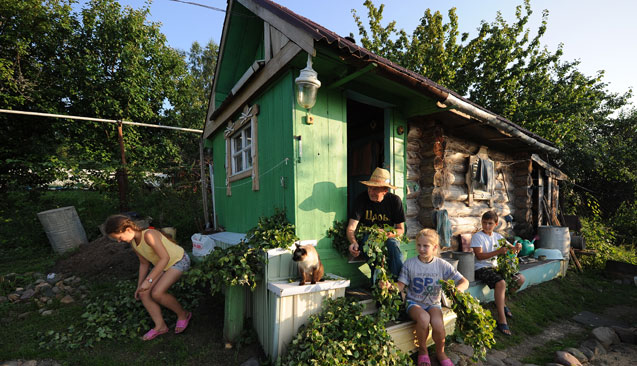 On a plot of "six hundredths," the dacha owner built a small house and used the remaining land for subsistence agriculture. Source: ITAR-TASS

Since the 18th century, Russian people have rescued themselves from the suffocating city summer by going to their dachas – country houses where the whole family went for a few months every year, while only the poor father of the family had to travel back and forth to the city for work. Since then, everything has changed in Russia, but Russians still spend their summers at their dachas.

It's Friday, the work day is over, and all of Moscow is rushing along roads to create 12-mile-long traffic jams in all suburban directions. Two, three or four hours of frustration, stuck on the asphalt in a traffic jam of those eager for a gulp of nature, and... there it is – the dacha!

The dacha is a national characteristic of Russia. In other languages, no such word even exists. In the Russian language, it appeared in the 18th century and was derived from the Russian word "give" – a piece of land with peasants on it was given by the czar to his vassals as payment for loyal service.

The Soviet government also distributed plots of land to their citizens, in return for various merits. However, in the Soviet era, they were tiny pieces of land (600 square metres, or 6,500 square feet) and people called such plots “six hundredths.”  On a plot of "six hundredths," the dacha owner built a small house and used the remaining land for subsistence agriculture. In addition, the house was a haven for private life – an island of internal exile in the Soviet Union.

In approximately this form, the dacha culture has passed on into modern Russia, in fact becoming a national pastime.

According to a survey by the All-Russian Public Opinion Research Center, the majority of Muscovites spent this summer close to their main dwellings: 31 percent in the country and 31 percent in the city, leaving the city on weekends only. Thus, a total of 62 percent of the capital's residents still prefer relaxation at a dacha over any other kind of recreational activity.

What is a dacha? Here is what foreigners have to say about this Russian novelty:

The main points at a glance

• 48 percent of urban residents in Russia have a property in the country, in most cases a house to retreat to in the summer (27 percent)

• Most owners of dachas use their land plots to grow vegetables and fruits for the family table, to plant flowers, or simply to relax

• Only a few people make money from their dacha, either by growing agricultural products for sale or leasing their dacha to be rented

“The culture of dachas is a kind of compensation to a city dweller for the cramped living conditions... There, in the embrace of nature, people enjoy fishing, swimming, picking mushrooms and growing aubergines and tomatoes.

“A friend of mine said that, in Moscow, he could not breathe, and so we have to go to his native village... The wooden house located by a road full of pot holes seemed to be the beginning of a fairy tale. White carved frames like stiffly starched collars decorate the windows; a cat is snoozing on one of them. The hostess greets us with cabbage rolls... However, first we will have to sweat for some time in a blazing Russian bath house.”

“The dacha is an opportunity to get plenty of sleep; it is a hammock, and it is drinking tea on the terrace, endless talks, walks and long nights over wine or vodka.”

Russians have no definite answer to this question either. Everybody has his or her very own dacha, and everyone uses their dacha to do what they like to do. Here is what Russians say about their dachas:

"We have spent summers at our dacha for 30 consecutive years. I have my own vegetable garden here: potatoes, cucumbers, tomatoes, aubergines, onions, carrots, strawberries, currants. In the summer we eat all this from the garden; in the winter we eat it canned, recalling warm days."

"I built this house with my own hands. Every brick was laid by me. Now I am going to build an extension – a garage. My wife is dealing with a vegetable garden. We are even thinking of having chickens. When we both retire, we will move here to live."

Zinaida and Viktor belong to the older generation of dacha residents. For them, the dacha is a place for subsistence farming, moral relaxation and physical labor.

In contrast, younger people simply prefer to relax in the country and get away from everything:

"My wife and I bought a dacha plot when we learned that we would be having a baby. We did not set up a vegetable garden; instead, we made a children's playground. Usually we come to the dacha for weekends; friends with kids often come to us, too. Of course, we roast barbecues and love to sing songs around the fireplace."

Most of the "new" dacha people, like Vasily, purchase dachas for money. Far from everyone can afford to purchase an apartment in a big city, but many people have money for a piece of land in the country.

Learn some Russian expressions: At a country house

The Soviet Union distributed "six hundredths" through dacha cooperatives that were attached to various organizations. This is how it happened that settlements of writers, miners, artists, builders and water engineers appeared on the map of Russia.

Gennady, a dacha resident with many years of experience (he is a playwright, and his cottage is located in a village called Moscow Writers), told us:

"I come to my dacha to get some solitude. But I do not always manage to remain in solitude. Writers are sociable people – even too sociable. If it is someone's birthday or some other occasion, everybody will surely invite everyone else, and drunkenness and revelry will begin. I try not to go to these gatherings, or, if I get caught being in such an event, I try to get away as quickly as I can. But occasionally it's necessary to go to them. After all, many things that people in the city never say are said so easily in the fresh air with vodka as the background. It turns out that many things are resolved at a dacha. I myself even wrote a play inspired by suburban gatherings. However, for Russian literature, this is not a new thing. All Russian writers have written about dachas: Chekhov, Dostoyevsky, Tolstoy..."