The rise and fall of Soviet folk’n’pop music 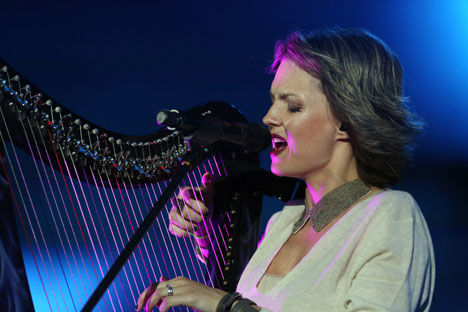 Folk music was promoted as an integral part of Soviet culture, which was not borrowed or copied from "rotten" Western music and lifestyles. Source: PhotoXpress

Folk musicians were forced to do their jobs by the circumstances of life in the Soviet Union. Despite the fact that they hated it wholeheartedly, they were playing folk songs and wearing folk-like costumes on stage. After the collapse of the Soviet Union in 1991, however, such music vanished off the screens and radio. Today’s generation of folk-music enthusiasts are studying foreign types of traditional music.

Fifty years ago, folk music was one of the pillars of Soviet ideology and culture. Folk bands were symbols of the Soviet type of socialist culture, in contrast with immoral Western mass culture and its music. Nowadays, just a few small groups of musicologists and researchers are still visiting rural areas in order to collect and record traditional Russian tunes.

This is how Soviet propaganda and censorship fought a battle to combat the possible influence of Western music and culture on Soviet citizens. At the same time, "national values" were promoted and enforced in society, with folk music among them.

Folk was also part of Communist ideology in the Soviet Union and one of the few music styles — along with classical and academic music — that enjoyed full government support, promotion and funding. Folk music was promoted as an integral part of Soviet culture, which was not borrowed or copied from "rotten" Western music and lifestyles.

Every Soviet music school or conservatory offered a program in folk music. Students could have learned how to play balalaika, accordion, as well as some traditional vocal techniques. But there was a problem: Folk music was perceived as boring, stiff and dated by a vast majority of Soviet citizens, and especially by the younger generation born after World War II.

Folk songs were usually performed by the choir, with a lead singer and without any musical instruments. This type of arrangement was related to traditional Russian Orthodox church singing, where singers used their voices as instruments. For a long time, churches were places where Russian peasants and slaves could receive basic education and music skills.

Interestingly, since no musical instruments were allowed in church choirs for centuries, this tradition was inherited by Soviet folk choirs—regardless of the fact that the Soviet state denounced and destroyed churches as enemies of a Communist, “religion-free” society.

After Stalin’s death in 1953, a kind of liberalization began under Khrushchev, and folk music was modernized with contemporary pop sounds and arrangements. A new formula was created somewhere in the bowels of the Communist Party’s Central Committee and the Soviet Ministry of Culture:

- Songs should use folk melodies.

- Singing should be based on traditional folk styles and harmonies.

- Performers must wear costumes with traditional and ethnic clothing patterns.

- Songs should be performed by young and specially trained musicians in groups using modern musical instruments, such as electric guitars, drums and keyboards.

Many official Soviet composers and lyricists started writing pop songs with a folk flavor for those new types of musical groups. By the mid-1970s, there was an abundance of pop groups performing newly written tunes and rearranged traditional folk compositions.

Soviet composers wrote such a huge amount of folk-based songs that it was almost impossible to understand if it was a real folk song or a folk-like composition from the Union of Soviet Composers.

For example, composer Mark Fradkin wrote a song about Dnieper River in which the style and lyrics were very similar to various folk songs about Russian nature. As a result, many Soviets considered this musical composition a folk song.

The idea of modernized folk music spread to all the Soviet republics. Since each of them had its own folk music based on their history and tradition, new folk’n’pop groups looked and sounded different from each other, depending on which republic they were representing.

New career and income opportunities opened to professionally trained young Soviet musicians. Since folk music was supported by the government, a new breed of bands capitalizing on this style was regularly shown on TV, played on the radio, toured all over the country and even had a chance to go abroad — the pipe dream of 99 percent of Soviet citizens.

One of the most successful, official folk’n’pop bands in the Soviet Union was Pesnyary from Minsk, Belorussia (BSSR). They sang various Belarusian folk songs and musical compositions that were written by Soviet composers with a folk flavor in them.

The band harmonized folk melodies and dressed in specially designed clothes, which made them look like Belarusian villagers from the 19th century. The leader of Pesnyary, Vladimir Mulyavin (1941-2003) was born and raised in the industrial city of Sverdlovsk in the Ural region, where he also attended a music college.

Mulyavin had nothing to do with Belorussia, or its native language and culture, until he joined a Belarusian organization called Philarmonia, which specialized on putting together music acts and sending them on official tours. Mulyavin saw an opportunity in the folk’n’pop style, putting together a band with an emphasis on strong vocal harmonies. 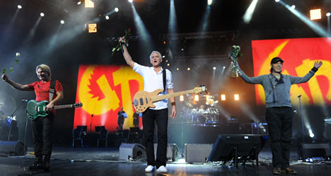 Mulyavin's band became frequent guests on Soviet TV shows, recording albums in the government studios and touring all over the world (including the United States). Music groups like Pesnyary were used by the Soviet propaganda machine to show the world that people in the Soviet Union played their own kind of folk music, which was completely different from music of the doomed Western society that was considered an enemy during the Cold War.

The career of Pesnyary and Mulyavin, in particular, was a very typical conformist’s success story for many Soviet musicians from the 1960s up to late the 1980s. They listened to The Beatles, The Stones, Pink Floyd and Led Zeppelin at home, but they performed and recorded folk music manufactured by Soviet propaganda and wore ridiculous "national" costumes on stage.

Many of those musicians hated what they were doing for a living and became heavy drinkers, while some were illegally selling musical equipment and goods they brought back from international tours. After the concerts, musicians would run toward the dressing room to change their hated folk costumes and put on their regular blue jeans and leather jackets.

One common practice for those bands, unnoticed by the Soviet censors, was the incorporation of rock riffs and drum solos into their folk arrangements. When they toured far from Moscow and in other big cities where their concerts were not so heavily supervised by local censors, they included covers from their favorite Western rock bands in the show.

The band Iveria from the Georgian capital of Tbilisi (Georgian SSR) used various Georgian folk songs, which people sang while eating and drinking with friends and relatives. Table ceremonies that can last for days are a part of Georgian tradition and hospitality. Iveria brought a Georgian flavor to Soviet folk’n’pop.

At the same time, Iveria released a tune called "July Morning" on their LP "Song about Georgia." The song was written by the British hard rock band Uriah Heep, which was very popular on the vinyl black market in the Soviet Union.

There are few details about how this song from "an ideological enemy" was allowed on the album, but we can guess that musicians deceived Soviet censors by presenting "July Morning" as some kind of a folk song sung by the British working class and members of British Communist party.

This was a common practice in Soviet censorship, in fact: Musicians pretended that, for example, The Beatles or other Western bands were singing folk songs and supported local Communist or Socialist party’s cell.

Soviet cultural politics and its emphasis on "our own" folk songs also spread beyond the borders of the Soviet Union to the other Communist countries in Europe. Many folk’n’pop groups from the Eastern bloc visited the Soviet Union under a policy promoting cultural exchange.

The Polish rock band Breakout performed in the Moscow Palace of Sport at Luzhniki Stadium in the mid-1970s. Their show was comprised of two sets and an intermission. During the first part of their show, a female singer dressed in a traditional Polish costume sang folk songs. The second part of the show, to the audience’s enjoyment, was based on blues rock and Led Zeppelin covers.

Without the part with Polish folk songs, Breakout’s tour to the Soviet Union would have been impossible. The Polish musicians probably pretended that they were playing Western protest songs about hard life and the exploitation of the working class by anti-human Western society.

In the Soviet Union, there were rules and regulations regarding the appearances of singers and bands from all 15 Soviet republics on TV shows. Every Soviet republic presented their own type of folk’n’pop group based on their traditional music and folk songs.

Even smaller ethnic groups from the Far North were represented with their own folk’n’pop singers:

In the 1990s, strict ideological Communist rules disappeared, as well as a vast majority of well-known folk’n’pop groups. Without heavy government support, promotion and financial backing from the Communist system, folk music was unable to compete on a new and wild Russian free market.

The folk’n’pop style showed its artificial nature and did not survive collapse of the Soviet Union. Musicians were trying to find budgets for their recordings and music videos. Folk music found its niche where researchers and musicologists provided the main driving force behind it, as in many Western countries.

Just a few newly formed folk’n’pop groups in the 1990s received some recognition and short-term success; but it was not the Soviet type of folk’n’pop from the 1970s. It was a more risqué and, sometimes, vulgar type of folk interpretation.

The band Balagan Unlimited exploited this traditional form when they added sexual undertones to their hit "What do you want?"

The neo-folk group Melnitsa (Windmill) was formed in 1999 and used not only Russian traditional songs, but also Celtic, Scandinavian and Balkan musical traditions, which made them sound more like a world music act than a folk group. Some of Melnitsa’s tunes can be heard on the Nashe FM radio station, which specializes in “Russian rock.”

Sergei Starostin, born in 1956, is a multi-instrumentalist and folk music performer. He is one of the devoted scholars and collectors of Russian folk songs. He has been on numerous ethno-expeditions, listening and recording the traditional singing of people in rural areas. Starostin has collected around 2,000 songs so far.

As part of his research, he participated in an ongoing festival of Russian music called "Entosfera" (Ethno Sphere), where various musicians performed Russian folk music using different arrangements and instruments.

After the collapse of the Soviet Union in 1991, all former Soviet republics became independent states, and the Baltic republics joined the European Union. Yet, since all those folk’n’pop groups were heavily promoted in the Soviet Union through TV, radio, recordings and tours, people still remember them.

Every year, some kind of a reunion event of Soviet folk’n’pop bands takes place. Some of them are still touring with a new lineup; members of others, like Pesnyary, have been fighting for the rights to the band’s name. At some point, there were three performing groups called Belarusian Pesnyary, each of them claiming that they were the real and beloved Pesnyary from the 1970s.