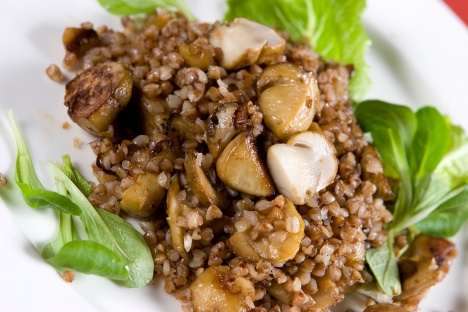 One of the main staples in Russia, grechka or buckwheat is highly nutritious, gluten-free and is used to make a delicious porridge.

There are not many types of grains that are eaten in Russia. Wheat and rye are the most common ones that are used to prepare bread, pancakes and pastry. Rice is eaten very occasionally and there is no ragi, while corn is not so common. But there is one more type of grain which is called buckwheat or grechka in Russian. Some sources state that origin of buckwheat is the mountainous regions of India and Nepal where it has been cultivated for the past 4000 years and only later on spread to other Asian countries and Europe.

Technically buckwheat is not a cereal grain; it is a fruit seed that is related to rhubarb and sorrel. Its name is supposedly derived from the Dutch “wordbockweit”, which means "beech wheat," reflecting its beechnut-like shape and its wheat-like characteristics. Buckwheat flowers are very fragrant and are attractive to bees that use them to produce a special, strongly flavored, dark honey, which is one of the best in Russia. While buckwheat is of similar size to wheat kernels, it features a unique triangular shape. Buckwheat is sold either unroasted or roasted. Unroasted buckwheat has a soft, subtle flavour, while the roasted version has more of an earthy, nutty taste. Its colour ranges from light-pink to brown. Buckwheat is often served as a rice alternative, porridge or ground into flour.

There are so many health benefits from eating buckwheat:

1. Best source of high-quality, easily digestible proteins. I wonder how millions of vegetarians in India still not using buckwheat in their food routine?

2.  Non allergenic. Buckwheat hulls are used as pillow stuffing for those allergic to feathers, dust, and pollen. I remember that when I went to China, our pillows were filled with buckwheat – very unusual but great for people with allergies.

3. Great for the digestion. It cleans and strengthens the intestines and improves appetite.

4. Chemical free. Buckwheat grows so quickly that it does not usually require a lot of pesticides or other chemicals to grow well.

5.  Buckwheat is a warming food. It is classified by macrobiotics as a yang food. It is great for eating in the cold winter months.

6.  Buckwheat contains no gluten and is not a grain. It is therefore great for celiacs and those on grain free and gluten sensitive diets.

I have never seen buckwheat in the shops in Bangalore. I used to bring it from Russia and slowly consume to prolong the pleasure. Yesterday I went to buy bread and eggs to the small local shop and I saw a small 200g plastic pack with small grains inside that looked exactly like grechka! You can imagine my surprise and the surprise of the shopkeeper was not less – “firangi” madam knows something so uncommon in South India. Supposedly unknown grain to Indians was available right there in a tiny shop. I picked it up and brought it to the office and showed to my fellow vegetarian friends. Neither of them knew that grain even though I asked people from south India as well as the north. My curiosity continued - what people in India use Grechka for? 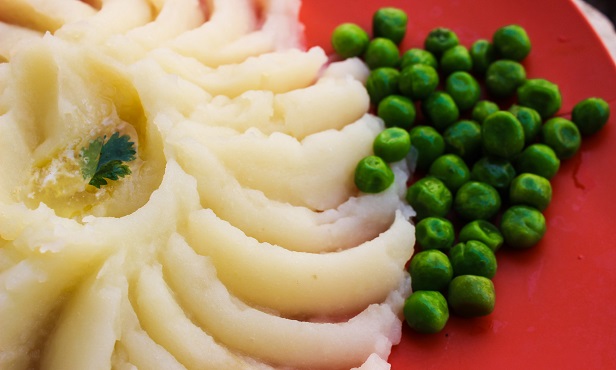 2. Roast the grains on low flame until they become golden brown

3. Melt butter in a heavy bottom pan, add buckwheat, stir it until each grain is covered with butter, add boiling water, salt and simmer under a lid for 15-20 min. It is important not to open the lid and not to mix during preparation.

4. When the porridge is ready, add a bit of butter and serve with any gravy of your choice.

As per Russian tradition, the porridge should be mixed with fried onion, dried mushrooms and boiled eggs.