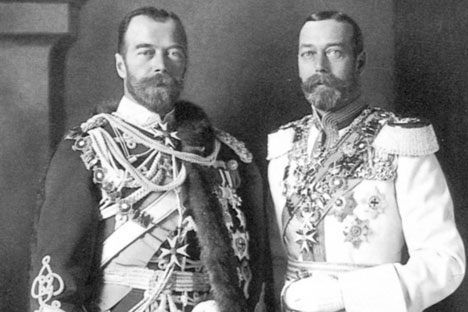 Wikipedia
King George V appoints his cousin the Tsar a field marshal to shore up faltering alliance against Germany.

The second year of the Great War proved for the British-Russian alliance and for relations between the two royal dynasties. The Russians suffered one setback after another throughout 1915, culminating in the “great retreat” from Poland.

The patriotic frenzy of 1914 gave way to gloom and despair among the Russian public. Allegations of treason filled the air. The commander-in-chief of the Russian forces, Grand Duke Nicholas Nikolayevich, was seen as too eager to help Britain and France by engaging the Germans on the Eastern front, at great cost in Russian lives.

IN PICTURES: The Romanov family in the memories of their contemporaries

He was removed from his post after the loss of Poland and Tsar Nicholas II took over as commander-in-chief. This set alarm bells ringing in Paris and London. The French feared Russia would sue for peace and the British Secretary of State for War Lord Kitchener expected Germany to divert armies from the Eastern front for a possible invasion of Britain. Something had to be done to prop up Russian commitment to the Allied cause.

It was ironic that Russia’s enemy was under the supreme command of British field marshals: the German Kaiser and the Austro-Hungarian Emperor. King Edward VII bestowed the top British military rank on them in 1901 and 1903. It may have caused consternation in St Petersburg that Nicholas was passed over, despite being Edward’s nephew. Kaiser Wilhelm II was also the King’s nephew but an unloved one and his appointment as a field marshal had been a goodwill gesture that flopped.

It was down to Nicholas’s cousin, King George V, to correct his father’s mistake. In December 1915, he appointed the Tsar a field marshal of the British Army amid much publicity. The appointment was announced in The London Gazette on January 1, 1916 (right) and a flurry of congratulations from Britain followed.

Lord Kitchener, also a field marshal, arranged the publicity. He asked the chief British field marshal Prince Arthur, Duke of Connaught and Strathearn (Queen Victoria's third son), to send a message of congratulations to the Tsar on behalf of all British field marshals. On December 1915, the Duke sent a cable declaring: “We are proud to welcome among our number the head of the gallant Russian Army, our comrades in this great war.”

To ensure that the Tsar understood the significance of his appointment, Kitchener sent his own cable, assuring Nicholas that “the valiant deeds of the heroic Russian Army, under the command of their illustrious chief, are watched by their comrades here with interest and warmest admiration, and we beg to offer YIM (Your Imperial Majesty) our sincerest wishes for brilliant successes in the coming year.”

Kitchener sent his cable in “clear” unscrambled form, apparently to annoy the Germans who were certain to intercept it. They must have been aware of frictions between Britain and Russia over the war effort. Kitchener’s cable to the Tsar was a message to Germany that the Allies were as united as ever.

Whatever the German high command thought, the appointment achieved its immediate objective. In a telegram to Kitchener, Nicholas wrote of “the great bestowed upon me by His Majesty the King. I deeply appreciate the high appointment to be a field marshal and send my innermost wishes to our British comrades for glorious success in the coming year.”

No field marshal would be complete without his baton. On January 4, the War Office wrote to Garrard & Co, asking it to “proceed with the manufacture of a field marshal’s baton for the Emperor of  Russia.

It should be inscribed, with accordance of the usual practice, ‘From His Majesty George V, King of the United Kingdom  of Great Britain and Ireland, to Field Marshal HIM Emperor of Russia KG 1916.’”Garrard & Co responded next day that work had begun on a baton and delivered it on January 14 with a velvet case and a bill for £55.

The big question was how to deliver the baton to the Tsar. General Sir Arthur Paget eventually took it by sea to the Russian port of Arkhangelsk, then by land to Petrograd (the German-sounding St Petersburg had been renamed as a patriotic gesture). The baton was presented to the Tsar on March 1, with “all due ceremony”, wrote Major-General Sir John Hanbury-Williams, adding that “the Emperor gave a lunch for the mission and drank to the health of our King”.

The Tsar was keen to meet Kitchener to resolve munitions shortages and poor liaison between the Allies. Kitchener wanted to see what was stopping Russia from procuring more guns and shells and improving its transport and communications. On June 5, 1916, he set sail for Archangelsk aboard HMS Hampshire. Tragically, the cruiser struck a mine laid by a German submarine and sank west of the Orkneys. Kitchener and most of the crew drowned or died of exposure. His body was never found.

When the Tsar heard the news, he declared: “How I wish I hadn’t felt obliged to encourage him to come, but it is the fortune of war.”

Nicholas II received several honors from the British monarchy, the highest of which was Knight of the Garter. Queen Victoria invested him into the Order in 1893 before he became Emperor of Russia.

In 1894, he was appointed colonel-in-chief of the 2nd Dragoons (Royal Scots Greys), now known as the Royal Scots Dragoon Guards. His portrait in full dress uniform by Valentin Serov is displayed in the Regiment’s Museum at Edinburgh Castle. His Scots Greys tunic and bearskin hat are on show at Tsarskoe Selo near St Petersburg.

The regiment still remembers its former colonel-in-chief: its cap badge is always worn on a black facing in mourning for him. The commanding officer and a regimental party were present at the burial of the Emperor’s remains in St Petersburg in 1998.

The Imperial Russian Anthem is played in his memory at regimental dinners when the band is present, alongside God Save the Queen and God Bless the Prince of Wales. The regimental military band’s bass drummer still wears the distinctive white bearskin given to it by Nicholas on becoming colonel-in-chief.

In May 1908, the Tsar met King Edward VII at sea off Revel (now Tallinn) and accepted the King’s appointment of honorary admiral of the fleet of the British Navy.

What's your opinion on the connection between two royal dynasties? Leave your comment below!