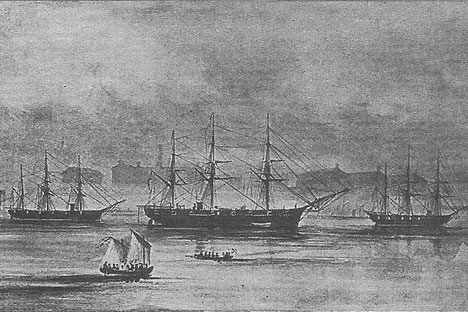 During the fall of 1863, the darkest hour of the Civil War, part of the Russian fleet arrived at the ports of New York and San Francisco. In this new history column, Professor C. Douglas Kroll talks about the visits and their significance.

Additionally, the two nations endured many years of tension without war, mostly related to border issues in North America, where Canada remained British territory. During the American Civil War, the British government’s sympathy seemed to be with the Confederacy and there was great concern in Washington that the British would give enter the war on the side of the South.

The United States had its share of difficulties with France as well. While France had been a vital ally of the young nation during its War of Independence, relations deteriorated shortly afterward.

In 1793 the United States quarreled with France about neutrality and then fought a brief, undeclared war in 1798. By the time of the Civil War Americans were complaining about the French occupation of Mexico and that regime’s conduct toward Confederate rebels.

Opinion: The noble struggle of 1812 has lessons for us today

By contrast, the United States had never had a quarrel with Imperial Russia, and, in fact, the relationship was characterized by peace and goodwill. Empress Catherine II (the Great) refused to send Russian soldiers requested by King George III to suppress the rebellion of his subjects in North America.

The American government furnished Russian forces with arms and sent a whole shipload of gunpowder to the defenders of the Siberian coast. Frank Golder, no Russophile, would later write of the Crimean War, “By the time it was over the United States was the only nation in the world that was neither ashamed nor afraid to acknowledge boldly her friendship with Russia.” 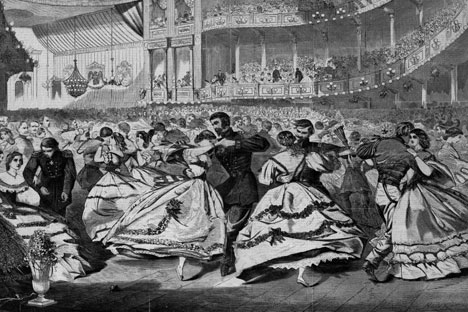 One of the greatest spectacles of the 1863 New York social season was the Russian Ball held in honor of the officers of the Russian fleet, on November 5. Source: Brooklyn Museum

Those Americans who supported the Union cause during the Civil War were also pleased that Emperor Alexander II had freed Russia’s serfs in February 1861. He became known as the “Tsar Liberator”, while Americans referred to President Lincoln as “The Great Emancipator” for freeing the slaves in Confederate territories in January 1863.

During the fall of 1863, the darkest hour of the Civil War, part of the Russian fleet arrived at the ports of New York and San Francisco. The first group came in September, and the second in October. There were 12 ships in total.

While the Russians never said why they had come, their arrival was interpreted by many Americans as a concrete expression of Russian friendship. The North seemed to be urgently in need of friends and the arrival of Russian warships dramatically highlighted the fact that not only was Alexander II America’s one true friend, but that he was seemingly prepared to fight on our side.

“God bless the Russians!” exclaimed Secretary of the Navy Gideon Welles, and this sentiment was echoed throughout the Union.

The welcome the Russians received in New York and San Francisco was overwhelming, and included elaborate balls. The New York squadron also visited Washington and Boston, and were feted with galas in those cities as well.

Sailing on the “Almaz” clipper was the composer Nikolai Rimsky-Korsakov. Legend has it that he wrote “Flight of the Bumblebee” because of that trip. He wrote in a letter home: “I’m bored and hear buzzing wind all the time.” Some believe that buzzing became the sound of the bees in his famous composition.

“Flight of the Bumblebee” by Nikolai Rimsky-Korsakov. Source: Youtube

The squadrons remained in the U.S. almost a year before returning home.

Dr. C. Douglas Kroll is an associate professor of history at the College of the Desert in Palm Desert, California.

On Oct. 7, the Embassy of the Russian Federation in Washington, D.C., will host the annual gala of the American-Russian Cultural Cooperation Foundation. This year’s event will celebrate the 150th anniversary of the Russian Navy’s goodwill visits to New York and San Francisco. Since 1992 ARCCF has promoted American-Russian relations through education, art and cultural exchanges. For more information about the event contact it's executive director Alexander Potemkin.