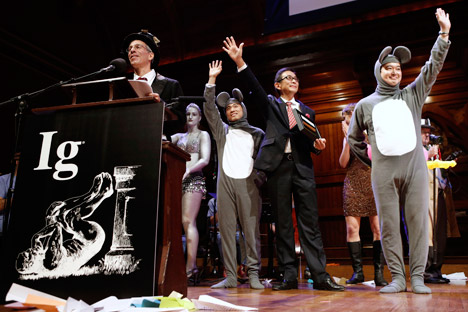 Russians can walk on water, write scientific papers every four days, turn dynamite into diamonds and force frogs to levitate.

This year, a Russian received a humorous "anti-scientific" Ig Nobel Prize for the sixth time in 22 years of the award’s existence. A team of scientists, along with the Russian Yuri Ivanenko, won the award in physics for publication in the journal PLoS ONE. In it, the scientists proved that people would be able to run on the surface of water, if the attempt was carried out on the moon.

The Ig Nobel Prize was introduced in 1991 by the American magazine Annals of Improbable Research, with the participation of the co-founder and editor Marc Abrahams. Since 1991, 10 Ig Nobel Prizes have been awarded annually in various categories—from classical Nobel physics and chemistry, to ornithology and astrophysics.

Russians have received the Ig Nobel Prize a total of five times before:

1. Corresponding Member of the Russian Academy of Sciences Yuri Struchkov received the Ig Nobel Prize in 1992 for his achievements in the field of literature. In the period between 1981 and 1990, he co-authored 948 scientific papers, which means that, on average, he published a new article about every 4 days.

David Pendlebury of the Institute of Scientific Information of Philadelphia found this interesting statistic in the institute's database. Yuri Struchkov became the most copious author of scientific articles listed in this database. Almost all of his work was devoted to crystallography—the science of crystals and their structure.

Struchkov’s work was actively published until his death in 1995, but, in 1999, in the journal Organometallika, there was a new work published on crystallography, and Yuri Struchkov appeared as one of its authors. In total, more than 2,000 scientific articles had his signature on them. In an obituary published in the newspaper Akt Kristallografika , such copiousness was explained by this incredible man’s tremendous capacity for work—someone who did not even have time to join the Communist Party of the Soviet Union.

However, gossips claimed that there were not enough facilities in the Soviet Union in order to conduct research in the field of crystallography. Soviet scientists used the facilities of the Institute of the Academy of Sciences of organic compounds, and therefore, as a thank you gesture, they added the head of the institute to the list of co-authors.

2. In 2000, the Ig Nobel Prize in physics was awarded to a native of the Soviet Union, Andrei Geim, and an Englishman, Sir Michael Berry of Bristol University, who forced a frog to float in the air with a powerful electromagnet.

According to Michael Berry, the magnet pushes the frog out in the air because of the difference in the fields. A frog is not a magnet, of course. However, it magnetizes the electromagnet field. This is called “induced diamagnetism." This effect is present in many substances, and the authors of the experiment even reported about their successful experiments with a drop of water and a hazelnut. They have not yet been able to make a person float in the air, because scientists have not been able to create a large enough magnetic field to contain it. Michael Berry has said that he would gladly soar into the air himself.

Interestingly, in 2010, Andre Geim, who had already abandoned his citizenship of Russia, together with his associate Konstantin Novoselov, won the Nobel Prize in Physics for obtaining the material called "graphene." Thus, he became the first—and so far the only—owner of both the world's real and comic Nobel Prizes.

3. The year 2002 was marked by scandals related to distortions in the financial statements of large corporations. The organizers and the jury of the Ig Nobel Prize could not ignore it and awarded officers, directors and auditors of about 30 companies a joint prize in economics. The wording of the award reads: "for application of the mathematical concept of imaginary numbers in business." One of the companies which received the award was the Russian gas giant Gazprom. In addition, this list included 23 U.S. companies, as well as companies from Belgium, Pakistan, Australia and the U.K.

4. In 2012, Igor Petrov, who headed a group of Russian engineers from the SKN company, received the Peace Prize for developing a method for producing nanodiamonds using military levitate explosives. He conducted his work in Russia, in the city of Snezhinsk in Chelyabinsk Region.

"Ladies, if you want diamonds, come up to me after the ceremony: But you have to have your own explosives with you," Petrov said, addressing the audience as he received the award.

5. In 2012, the Ig Nobel Prize in the field of exotic hydrodynamics was received by another Russian native, Ruslan Krechetnikov, who is a professor at the University of California. Together with his graduate student, Hans Mayer, Krechetnikov found the reason why coffee spills out of a cup while a person is walking. Maybe it will surprise you, but the unevenness of the step while walking and carrying a cup is to blame, as it follows from the results of research.