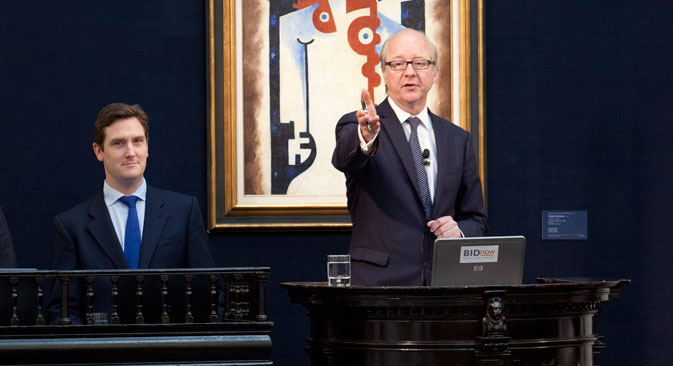 Lord Mark Poltimore was recently in Moscow to host a charity auction that celebrated the opening of the Fifth Moscow Biennale of Contemporary Art.

Mark Poltimore has been in the business of art for more than 30 years. He is a pioneer in his field, shining a spotlight on the Russian art market in the past decade. RBTH caught up with Lord Mark Poltimore to talk about the role of Sotheby’s and Russia’s art-market renaissance.

RBTH: How did you get started in the world of Russian art?

Mark Poltimore: My father was an art dealer in the 1950s and 1960s and so I guess art is in the genes. I started to get involved with Russian art when I joined Sotheby's in 2002. It has been the most exciting part of my career and I am now totally absorbed with Russian culture and its people.

RBTH: What era of Russian art is your favorite? Which period is the most lucrative for auction houses?

M.P.: My favorite period is when Russian art was, in my opinion, at its zenith, in the early 20th century. Russian art led the world with artists such as Malevich, Goncharova and Kandinsky.

In 2001 Sotheby's was selling about $7 million of Russian art, but by 2008 this soared to $250 million. Today, Russians are buying more international art than ever before, and are increasingly active in our auctions of Impressionist, Contemporary and Old Master art. In July, Russian buyers purchased almost one third of the works in our evening auction of Old Master & British Paintings in London.

RBTH: Sotheby’s has been at the forefront of annual auctions of impressionist and modernist works – 20th- century Russian art is very popular in the West. Which Russian artists are most coveted? And do you hold regular sales of contemporary Russian art?

M.P.: Sotheby’s hold six sales of Impressionist and Modern art every year - two in London, two in New York and two in Paris – and Russian artists such as Alexej von Jawlensky and Wassily Kandinsky tend to be very popular additions to these sales.

Sotheby’s also holds regular sales of contemporary art across the world, and the company is always looking to champion artists from different regions – including Russia and the CIS. While contemporary Russian art has always featured in our Russian sales, Sotheby’s will stage a new stand-alone sale of Russian and Eastern European art called ‘Contemporary East’ on the 23rd of  November in London. Such art is underappreciated, and we are looking forward to introducing many new artists to the international auction market for the first time.

RBTH: Are Russians more or less active in buying art when compared with Europeans or Brits?

Moscow Art Biennale offers a model for the world

M.P.: Russians are passionate about buying art. The biggest difference is that Russians never buy one of anything and nearly always like to amass a collection!

RBTH: What are your thoughts on Russian contemporary artists? Will any be as successful, as the likes of Marc Chagall, for example?

M.P.: I believe Russian contemporary art is undervalued and underappreciated. The very best artists will always be valuable and prices will compare with the best from other centuries.

RBTH: What can you tell us about the recent Moscow charity auction?

M.P.:  The Moscow auction you refer to, which was held on 17th September, was a charity auction with funds going to the building of a contemporary art museum. The auction was completely planned by the charity committee and so it was not a Sotheby’s event. We were asked if we would help take the auction and I volunteered my services as the auctioneer. I do hope the limited help we gave raised more money for a good cause.

RBTH: Critics were surprised that works by Ivan Polissky, Igor Makarevich, Andrei Filipov and the Blue noses group were sold so fast during the auction and at a much higher price than expected and works by Sergei Shutov, Konstantin Zvezdochetov, Vadim Zakharov and group AES+F were not sold at all (if I am not mistaken). Could you please give us your view on this situation? What makes a piece of art successful at auctions?

M.P.:In all sales there are always a certain proportion of unsold lots for a wide variety of reasons. We will include a wide range of contemporary art in our forthcoming London sale in November and I think we will see some very good results.