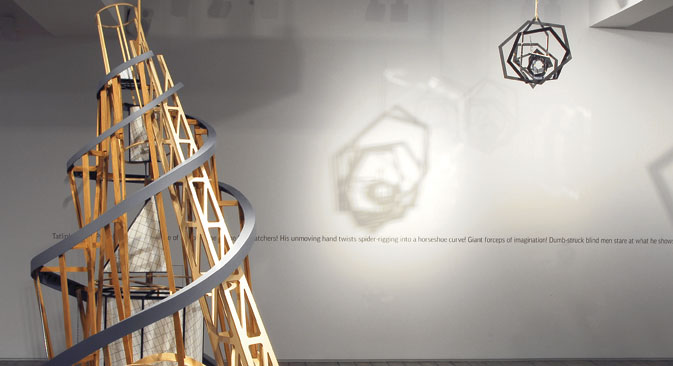 A new London exhibition brings some of these revolutionary designs to life in a fusion of homage, heritage and contemporary art. The models on show, including a glider, a tower and hanging sculptures, are the work of Henry Milner, partly informed by discussions with Rodchenko’s grandson, Alexander Lavrentiev.

Elena Sudakova, founder of the GRAD gallery, co-curated the exhibition “Utopia Ltd”, which reconstructs iconic works of art. She told RBTH the inspiration for the exhibition came from the desire to understand the work of these artists: “For Constructivists materiality was a very important concept; they wanted to move away from easel art. So the only way to understand their creative process is to re-create their work.”

London has a definite taste for works from this era. Earlier this year, City Hall hosted one of several recent exhibitions dedicated to constructivist architecture. In 2009, Tate Modern showcased early works by Rodchenko and Lyubov Popova; in 2011 the Royal Academy followed suit with their collection of Soviet images, “Building the Revolution”, coinciding with a giant model of Tatlin’s earlier tower in the courtyard.

In reconstructing Tatlin's glider Letatlin, Sudakova explains that Milner “went though the same processes as Tatlin, gaining an understanding of the artist's reasoning...” A series of photos shows Sudakova and Milner taking measurements from a surviving Letatlin in Russia.

A collaborative ethos pervades these works. “Lissitzky actually encouraged others to create his designs,” Sudakova points out. But the exhibition also illuminates the originals. John Milner, co-curator, professor of art and father of Henry, uncovered new images of Tatlin's 1925 version of his famous tower or Monument to the Third International “so this is the one we reconstructed rather than the 1920 version,” Sudakova says.

One of the most mesmerising exhibits is a group of Rodchenko’s hanging sculptures, twirling in a corner and made – unusually – from metal, so that gleaming patterns are projected across the gallery walls. The use of “reflective materials”, Sudakova explains, grew out of a discussion with Lavrentiev, who revealed that his grandfather “originally wanted the surfaces to reflect light.”

Lavrentiev, himself a graphic designer and art historian, describes how one of the Rodchenko’s original mobiles, in the New York MoMA has “traces of silver paint on it”. He sees recreations as a way to introduce Soviet designs into modern culture. “Otherwise, when it’s hidden in a book and it’s known only to the scholar it has a very limited audience,” he says.

“The Latvian artist Gustavs Klucis is not very well known and yet he is a pioneer of multimedia design,” says Sudakova. The exhibition includes a model based on one of Klucis’ “propaganda stands”. In 1921 the artist declared: “I am building a new reality which does not yet exist.”

Embodying these designs is very much in the spirit of constructivism, moving towards what Rodchenko called “real space”. He saw modernist art as requiring substantial, geometric means of expression. Rodchenko wrote in a 1921 essay: “The brush … became an insufficient and imprecise instrument in the new, non-objective painting, and it was crowded out by the press, the roller, the ruling pen, the compass.”

Traditional drawing was giving way, Rodchenko declared, to diagrams and engineering. The sense of movement inherent in these constructions also became significant. Geometric structures were intended to spin inside Tatlin’s tower. Lissitzky wrote in his 1925 article on “Art and Pangeometry”: “The individual bodies in the Monument to the Third International revolve each around its own axis at its own velocity.” 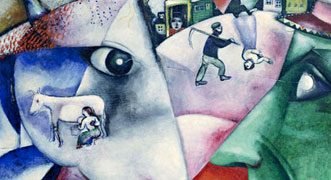 A poetic quotation from Velimir Khlebnikov recurs in the exhibition. A poem from 1916 celebrates and prophecies Tatlin’s inventions, calling him “initiate of the whirling blades/ And austere singer of the screw-propeller,/ One of the order of sun-catchers …”

One of the few disappointments in the exhibition is that the kinetic element is largely missing. Rodchenko’s mobiles need motion to achieve the full interplay of light and shadow. But GRAD’s second exhibition is more confident and coherent than the first and bodes well for an ambitious future.

Sudakova has grand designs for GRAD. She hopes eventually to use her connections with Moscow’s cultural community to create a permanent Museum of Russian Art in London.