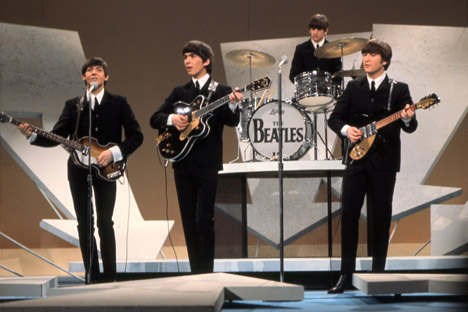 “Back in the USSR” by The Beatles is one of the most popular songs about Russia to ever be sung. Source: Alamy / Legion media

Brits love Russia! And Russia loves them back. Here is proof. British artists, from The Beatles to Arctic Monkeys, are extremely popular in the land of bears and vodka - and the love seems to be reciprocated. Many Brits have sung about Russia over the years - here is a list of the most popular songs.

1. Matt Monro - From Russia with Love

In 1963 “From Russia with Love,” the second James Bond film featuring Sean Connery in the leading role, was released. The plot follows Bond while he assists Soviet consulate clerk Tatiana Romanova in her defection from the USSR.

It is difficult to work out whether it was the film that make the soundtrack, written by Lionel Bart and sung by Matt Monro, so famous or vice versa - either way, it was a success.

Very few people would object to the assertion that “Back in the USSR” by The Beatles is one of the most popular songs about Russia to ever be sung. It was released in 1968 and documents the arrival in the USSR of a Russian spy who has spent a long time in the States.

Upon reaching his homeland he cannot contain his happiness at the many wondrous things he can finally see again, from the Moscow girls that make him “sing and shout” to the Ukrainian girls that “really knock him out”.

Intended to be a parody of "Back in the USA" by the Beach Boys, the song shocked many at the time of its release for its allegedly pro-Soviet message. Years later, Paul McCartney stated he had known very little about the Soviet Union when he wrote the song. The Beatles as a band obviously have never been to the USSR.

3. Rolling Stones - Sympathy for the Devil

1968 was a particularly prolific year among British artists singing about Russia. “Sympathy for the Devil,” written by Mick Jagger and Keith Richards for the Rolling Stones, was heavily influenced by Mikhail Bulgakov's “Master and Margarita” and his large sequences dedicated to the figure of the Devil.

In the song, the Devil takes us on a journey through some of the most truculent events in history, from the death of Jesus Christ to the religion wars in Europe - with an obligatory stop in St. Petersburg for the Russian revolution and the killing of the tsar and his family.

In 1974 English progressive rock band Renaissance released one of their more iconic songs: “Mother Russia,” a tribute to Russian author Aleksandr Solzhenitsyn and his novel "One Day in the Life of Ivan Denisovich." The original version of the song lasted 9 minutes 30 seconds, cut down to 3 minutes 7 seconds for special release in the U.S.

Grigori Rasputin, an advisor of Tsar Nicholas II, is one of those historical figures on whose assessment is difficult to find an agreement. What everyone can agree on, however, is that choosing to sing a song about him was a very good choice.

At the time of the Cold War, when Russia was still a faraway land drenched in mystery, it would be obvious for people to wonder - are Russians really like us? Do they dream like us? Do they worry and care like us?

And - most importantly for the 1980s generation - do they dance like us? The Vibrators’ 1980 punk anthem addresses this very important question with “Disco in Moscow” - a highly danceable tune, no matter what country you are from.

The Redskins’ first single came out in 1982 - and rapidly conquered many fans with its political message wrapped in a catchy tune. With its raw and brutal sound, heavily influenced by the punk tradition, “Lev Bronstein” (real name for Russian revolutionary Leon Trotsky) scored the band their first Radio One session and launched their career.

In 1984 British folk-rock musician Al Stewart released his tenth studio album, titled “Russians and Americans.“ The eponymous song is a strong warning to the Soviet Union and the United States, two countries with “so much in common and so little trust,” at the time of the Cold War.

That was not his only contribution to the body of songs dedicated to Russia. A few years earlier, in 1977, Stewart had released “Roads to Moscow,” a ballad that tells the horrors of the aftermath of the German invasion of Russia in World War II, where Russian soldiers captured by the German before their defeat were accused of being spies upon their return to the motherland by the Stalin regime.

In 1985, as Mikhail Gorbachev became General Secretary of the Communist Party of the Soviet Union and the country faced a series of challenges that would finally lead to the collapse of the USSR, English musician and songwriter Sting debuted anti-Cold War song “Russians.”

Inspired by illegal satellite viewings of Russian TV children programs, the song is set to a melody emulating the tone of Sergey Prokofiev’s Romance Melody from the Lieutenant Kije.

Heavy metal band from Leyton Iron Maiden leaves us with some of the best lyrics ever written about Russia. “Mother Russia” was composed in 1990, and wants to be a tribute to the country and its people at a time of turmoil that would have led to the collapse of the Soviet Union.

The music itself draws on the Russian musical tradition and emulates its tones bringing back in time with a nostalgic look to “the time of a great empire.”

“Revol,” a single released by Welsh rock band Manic Street Preachers in 1994, might not be entirely about Russia, but it certainly has a predominance of important Russian and Soviet figures among those listed in its lyrics.

They names are presented in contraposition with terms defining sexual and emotional relationships. From Lenin, Stalin and Trotsky to Brezhnev, Gorbachev and Yeltsin, no one is left unscathed. The song is full of obscure analogies, and even bass guitarist for The Manics Nicky Wire admitted ignorance when asked to explain the meaning of the song.

St. Petersburg has always been a dreamy city, and the idea is perfectly encapsulated in this 2005 song by alternative rock band Supergrass. The lyrics express the protagonist’s desire - embodied by the promise that he will soon sail for Saint Petersburg - for a better life in a different world.

This ethereal ballad in pastel tones fits perfectly with the sublime spirit of the city - once you hear it, you won’t forget it.

The provocative message of the video, the gentle lyrics describing a love story in the Russian capital and the awesome track have given the band some much deserved recognition. Listen to it and you will want to fall in love in Moscow too.

We are sure we missed some songs. Add your suggestions in the comment section below!