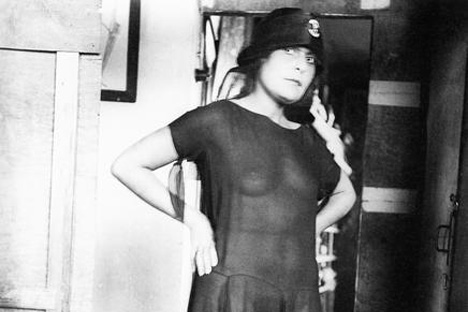 What revolution brought to fashion.

It is a generally accepted assumption that there was no fashion after the Russian Revolution. The most severe terror, starvation, war — how could fashion be encouraged amid this?

However, curiously enough, the 1920s was one of the most fashionable eras in Soviet history.

The revolution, as well as a new ideology inclined toward asceticism, dictated the terms of how fashion would develop. The symbols of the new time were leather jackets (particularly aviation jackets from WWI) that had been purchased in excess for the imperial army and expropriated and used to outfit the employees of the Cheka (secret police), as well as red scarves tied in an unconventional manner — under the chin and backwards, symbolizing women’s liberation from the “imperial yoke.”

In parallel, work was under way to create the “clothes of the future,” designed to be functional and in line with the spirit of communism. The task of Soviet design in the 1920s was to create an outfit for industrial production — also known as “production clothing.”

Artists developed the most unlikely uniforms for surgeons, pilots, firefighters, builders and vendors. The father of the Soviet propaganda poster, Latvian artist Gustav Klutsis, developed a miner’s uniform with a light on the helmet and an alarm belt equipped with a complex keypad.

Clothing was seen as a person’s microhabitat. The material for the first models of the “Soviet outfit” were plain canvas, cloth, coarse calico, chintz, felt, baize, flannelette and coarse wool.

The pioneering ideas of Constructivist artists gradually began to penetrate the fashion world as well. Suprematist designs on sweaters and scarves, as well as sketches of Nadezhda Lamanova’s drawings for fashionable silk pieces in the Cubist and Suprematist style, were in high demand. In terms of cut, bids were made on the structure of the model and the design of clasps and pockets.

This approach to clothing was somewhat similar to the ideas of today’s fashion minimalists. The almost complete lack of décor, the emphasis on the shape and functional load: Today, all of these techniques are actualized in the collections of Jil Sander and Stella McCartney. These ideas proved to be very advanced and tenacious.

In 1924, the catchy, geometric pattern without a subject entered fashion from the light hand of the Constructivists. Artists L. Popova and V. Stepanova developed samples of avant-garde fabrics at the First Print Factory, which were then launched into production and put up for sale.

Many years later, the geometric shapes and fabrics discovered by Russian Constructivists in the 1920s started to appear on catwalks around the world — for example, Yves Saint Laurent’s legendary trapeze line dress.

Attitudes toward “the sketch” were also groundbreaking. The sketch was allotted a leading role in the formation of a sample and the concept of a collection. “The sketch was the embodiment of the creative process, rather than the drawing of the finished model.” Later, this method was adopted (in all possibility, completely independently) by Christian Dior, Yves Saint Laurent and many others.

At that time, Russia received its first fashion magazine, Atelier, created under the innovative Atelier Mod (Fashion House). Its main purpose and task were set out in an editorial article: “The active and tireless pursuit to identify all that is creatively perfect, that deserves the most attention in the sphere of material culture.”

The grandeur of conception was determined by just one list of stars who agreed to collaborate with the magazine — the artists Yury Annenkov, Boris Kustodiev, and Kuzma Petrov-Vodkin, the sculptor Vera Mukhina, the poet Anna Akhmatova and many others.

In addition to luxurious illustrations and advanced Constructivist models, the magazine offered an overview of current European trends, in which the Soviet control system saw “vestiges of capitalism.” The fashion magazine’s first issue was its last. If not for the excesses of Soviet censorship, Russia would now have its own Vogue and Harpers Bazaar all rolled into one.