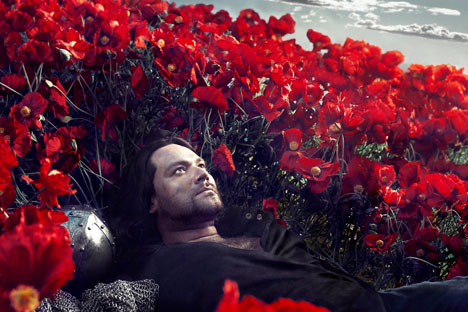 The Metropolitan Opera’s decision to feature three diverse Russian works this season was praised by singers, but has attracted controversy.

For the third year in a row, soprano Anna Netrebko opened the Metropolitan Opera season – but this year Netrebko’s Russian roots were more significant. She was singing the role of Tatiana in Peter Tchaikovsky’s Eugene Onegin under the baton of conductor Valery Gergiev.

The opera was just the first of three Russian works the Met will perform this season. Onegin, which runs until Dec. 12, was followed by The Nose, by Dmitri Shostakovich, which is being performed just this month, and Alexander Borodin’s Prince Igor, which will open in February.

It was the Russian-ness of opening night drew the ire of many fans, who gathered both inside and outside the theater to protest against Russia’s anti-gay propaganda law.

Activists wanted the Met to dedicated opening night to the gay rights in Russia, and while the Met declined, General Manager Peter Gelb did write a piece for Bloomberg news expressing support for the LGBT community.

The op-ed was reprinted and included in the opening night program.

Met General Manager Peter Gelb said that the inclusion of three Russian operas in one season was not unusual, but the choices were still noteworthy. “We are always trying to come up with variety of what we have to offer to our observers,” Gelb said. “Having Eugene Onegin, The Nose and Prince Igor in one season is very exciting, though. These are just three operas that happened to be very interesting yet very different.”

Onegin is undoubtedly the best known of the three; it is one of the most frequently staged Russian operas in the world. Onegin has been performed at the Met multiple times since its premiere in 1920, in an Italian version with Claudia Muzio as Tatiana and Giuseppe De Luca as Onegin. The opera’s most recent run at the Met in 2006-2007 was also conducted by Gergiev, with Renee Fleming as Tatiana and Russian baritone Dmitry Hvorostovsky.

American critics who attended the premiere on Sept. 23 expressed variety of opinions, Matin Bernheimer of the Financial Times wrote that the “evening ultimately belonged to Anna Netrebko” while the Wall Street Journal’s Heidi Waleson called Netrebko's performance “one-dimensional” and noted that the “Letter Scene, the high point of the opera, was well-sung but did not capture the heart.”

Polish baritone Mariusz Kwiecien, who is singing Onegin, was unabashedly complementary of Netrebko’s work. “Working with Anna Netrebko, such a beautiful, energetic and talented artist, is amazing. I understood that she grew up listening a lot to Tchaikovsky, so I think she knew the part of Tatiana by heart before working on it,” Kwiecien said.

The Nose is returning to the Met stage for the first time since its premier in 2010. Gelb said that the success of the 2010 production, which was staged by South African artist William Kentridge and incorporates video, factored in the decision to bring it back.  “The Nose was unusually well received for such an avant garde opera,” Gelb said. “It is an extremely gripping production with a great cast and fantastic music by Shostakovich.”

Operagoer Angelica Blotkevich is one of the work’s fans. “The approach to video is very modernist, and overall I would call The Nose very stylish. I enjoyed the set design aesthetic a lot. The actors' performances are accompanied by projected shadow-looking graphics. At times actors interact with the shadows.”

A co-production of the Metropolitan Opera, the Festival d’Aix en Provence and the Opéra National de Lyon, The Nose immerses observers in the radicalism of the musical language of young Shostakovich, who was 22 at the time he composed the work. At times, Shostakovich ended up making his libretto much deeper and more complicated than the original story by Nikolai Gogol.

In the current production, Brazilian baritone and actor Paulo Szot stars as the protagonist, Kovalyov, who wanders St. Petersburg in search of his missing body part.

A production fit for a prince

Prince Igor will be performed at the Met for the first time in nearly 100 years. It was last staged there in 1917. Russian classical music сritic Ekaterina Biryukova said that the choice of the piece was directly related to the decision to hire director and set designer Dmitri Tcherniakov to direct a piece at the Met this year. “I think Prince Igor was chosen because a Russian director is supposed to make his debut at a place like The Met with Russian music,” said Biryukova.

Gelb agreed that Prince Igor was “a great work for Dmitry Tcherniakov to make a debut with at The Met.”

According to the Biryukova, it's senseless to expect costume entertainment from Tcherniakov, since his works require reading into the scenic context every single moment. “I doubt the Polovtsian Dances will be actual dances,” she said, “more likely some intense psychological twist.”

Gelb confirmed Biryukova’s hunch. “It is worth noticing that Dmitri in collaboration with the conductor Gianandrea Noseda reconstructed the structure of the original opera to make the dramatic arch stronger. Tcherniakov’s view of Prince Igor's story is as a timeless psychological journey rather than a purely entertaining piece. For instance, the famous Polovtsian Dances for him is more of an intense visual hallucination for which we had to make 12,000 puppets!”

Behind the curtains of the new Mariinsky

The production of Prince Igor will involve a number of Russian artists, all from St. Petersburg’s Mariinsky Theatre. They include Russian bass Ildar Abdrazakov, who will sing the lead; tenor Sergei Semishkur in the part of Vladimir Igorevich; and Mikhail Petrenko, who will sing Prince Galitsky.

There may have been no grand plan behind the Met’s Russian season, but singers are happy about the selection of operas. Said Mariusz Kwiecien: “I like the fact that this year the Met has three Russian operas and one Czech, Rusalka, by Dvorak. There is so many fantastic composers, why only stage Italian operas?”

Lyric soprano Katie Kat, who participated in a Met focus group aimed at attracting younger audiences, said that the choices should help broaden the Met’s audience base: “One of the things they took to heart was the groups demand for lesser performed and more modern works, outside standard repertoire,” Kat said. “It's not just that The Met is doing 3 Russian operas this season- They are branching away from the standard repertoire of French, German, Italian - with Russian and Czech.”

For opera fans outside of New York, all three operas will be available through the Met Live in HD program both in the United States and abroad. The schedule can be viewed here.