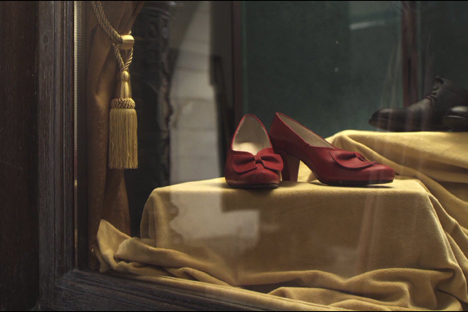 Until recently, few people outside of a narrow group of professionals had heard about Costa Fam. He appeared quite suddenly in the world of big movies: One minute he was not there, and the next minute he was. Last year he was awarded prizes from European festivals one after another, and then his movie “Shoes” was proposed for an Oscar, along with Bondarchuk's “Stalingrad.”

“Shoes” is a poignant, 18-minute story about the Holocaust that does not have a single line of dialog or even a face featured in it: Only red shoes are shown throughout the entire movie. Still, it has a greater impact than any big-budget action film, proving that war can be explored simply, wisely and quietly.

Costa Fam knows how to tell a simple story. He himself is a story, though not simple at all. His mother is Jewish and father is Vietnamese—quite an explosive cocktail to course through one's veins. One of his grandfathers was killed in Vietnam, and the other went missing in action during the war. His grandmother lived in occupied Ukraine. His family has experienced more than its share of drama.

"My mother remembers how they searched for frozen potato tubers in the field, how their bodies swelled from starvation. She remembers the knock at the door, how they were called Jewish degenerates and thrown into the cold. War is a tragedy for everyone, but for Jews it was like that," says Fam.

He has been making films his whole life, or, at the very least, trying to. He has already completed dozens of short films, TV series, and commercials—the normal work profile of an ordinary professional. There was nothing to prepare him for the success he experienced after “Shoes,” and it cannot be explained just by its Jewish theme.

If you think about it, nothing much happens on the screen. A girl buys the shoes of her dreams. She falls in love, gets married. They have children. They are just a regular couple and very happy. Then all this happiness is shattered into pieces when the war begins. It is a war to destroy those like them. The last scenes are of the gas chambers being slammed shut, the forlorn outlines of camp barracks, and a mountain of shoes without any owners.

Some might shrug their shoulders or be bored, but very few remain unmoved. Many in the audience cried during the screening of “Shoes.”

"About eight years ago I visited Auschwitz," says the director. "And, for two hours, here I am—an adult man, and I was hysterical. I just could not get a hold of myself. When you see children's shoes there, you can't imagine how this could happen, how such a thing could be true. I have five children and now I go with them every year to Auschwitz, to tell them and show them. I know that it is not a positive place for a child, but it must be seen. Otherwise, you will not understand something important about life.”

He advises his friends to go there, too. Fam has some unusual friends. One of them visited Auschwitz during his honeymoon trip around Europe. This friend called him in Moscow. He said that he was standing in front of a store window and looking at red shoes that were the same as the ones in the concentration camp. This is where the idea for the film came from.

A month later, Fam was already in Poland, negotiating about shooting a film there. He went to Auschwitz-Birkenau, then to Majdanek. He wandered through the Krakow ghetto and finished writing the script in a small motel that was right next to the concentration camp, with windows overlooking the camp morgue. He filmed in Prague, Belarus and Paris. "I made sure that it would not be clear where the film takes place. This is part of the history of all of Europe, not the history of one country," says Fam. 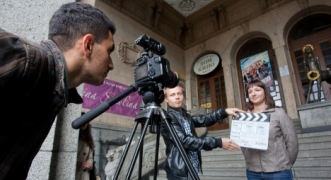 This is also the reason that the film does not show any faces. If you raise the camera to the face, the story immediately becomes personal. This is not an art-house experiment: It is the position of the director. Through film, he created his own kind of monument to an unknown soldier—or rather, to unknown victims of war.

The audience feels it too. The reaction everyone has after watching is a moment of silence, and then everyone gets up.

Reactions to his film in Russia are more subdued than in the West, which is not hard to believe when you recall that only two films have been released on the Holocaust in our huge country in recent times: Mumin Shakirov's “Is the Holocaust Wallpaper Glue?” and Fam’s “Shoes.”

"I think they are afraid," says Fam. "This subject shines a light that exposes terrible acts. After all, there wasn't enough Gestapo to kill several million Jews. Someone else did it... We all would like to be the grandson of a hero, and people are compassionate to families of victims, but how would you like to be the descendant of a bastard? When I realized that executioners and informers have grandchildren that live next to me, I got really scared. I grew up in a small village in Ukraine. As a child, you don't really notice, but then later you realize that you don't have any grandparents, and many other kids do, but for some reason they are aggressive and terse with you. You start to wonder why that is. 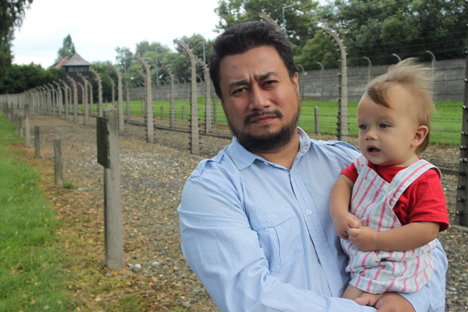 Costa Fam:  'I have five children and now I go with them every year to Auschwitz, to tell them and show them.' Source : Press Photo

“It's not about anti-Semitism, believe me. It's gone. It's just in Russia, I think people do not like foreigners, or strangers in general. It does not matter if it's the Jews, gays, dissidents or intellectuals. This imperial attitude, from the desire to dominate, seems to be very strong. To get over a weakness or illness you first have to acknowledge it. It would be absurd to walk around with a diseased liver and tell people that everything's fine, boasting that you can drink as much as you want just out of a sense of pride. You have to get help, otherwise things will end badly,” says the director.

“Everyone already understands this—Americans, French, British, Germans—everyone. In the United States, in a souvenir shop I met a Vietnam vet who was so funny, a really crazy guy. He started to apologize, express regret, give me some gifts... Understanding your mistakes is the only way. Otherwise, it all builds up and hurts, hurts…

“An Israeli delegation arrived in Belarus. An old lady on crutches came out to meet them. She fell at their feet, weeping. She said, ‘Forgive me!’ ‘For what?’ And she told them that when the Jews were driven into a ditch, her mother went up to one of the women and took off her shoes—which were elegant red ones, by the way. ‘She came back,’ the lady said, ‘and put them on me. All my life I have had bad legs, I can’t stand it.’

“There is another story. Some Jews went to a farm, slaughtered the last cow and ate it. They were hungry and had been roaming through the forest. The old woman who lived there was upset and led the police to them. The police killed the Jews, but, at the same time, beat the lady and raped her daughter. This affected everyone.”

“My children are growing,” says Fam. “I hope to God they are never faced with such a choice. But they should understand something about what it was and what it cost. We live in fairly calm and stable times, but tomorrow it could happen. If you don't understand the difference between good and evil, chances are that you could become a villain, a coward, or a beast—even if you didn't expect it of yourself. And then it's too late, there's no going back. And how would you live with it?”

Five facts about Costa Fam and his projects:

2. “Shoes”is part of Fam's Holocaust trilogy. He would like to have Natalie Portman star in one of the films.

3. Fam's father is from a well-respected family in Vietnam. He was among 100 brothers-in-arms that Ho Chi Minh personally sent to study in the Soviet Union. Fam's father was a guerilla fighter from the time he was 8 years old until he was 17.

4. "I'm a big fan of American democracy,” says Fam, “and love Coppola's ‘Apocalypse Now,’ but there has never been a film about the Vietnam War from the point of view of the guerrillas. I would love to make that film. And, what's more, I plan to do it."

5. The American premiere of “Shoes” will be held on Feb. 10 at the San Diego Jewish Film Festival. Music for the film will be performed by a live symphony orchestra.