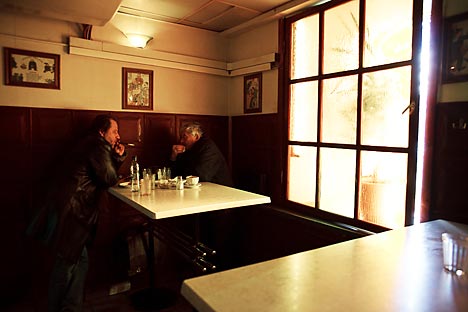 Rumochnaya is a place where a mill worker and a government official could rub elbows. Source: Ruslan Sukhushin

The best places to drink in the Russian capital won’t be found in any guidebooks.

English lacks the right words to describe Russian drinking establishments. Before the Soviet era, people could buy wine and spirits in kabaks. Overflowing with customers who needed to get drunk fast, kabaks were not the kind of local watering holes where people would socialize, like an English pub.

Despite their importance for certain segments of the population, the kabak era ended with the Russian Revolution of 1917; after the Bolsheviks came to power, they made the first of several fruitless attempts to eradicate alcohol, and shut down most of the country’s drinking establishments.

After World War II, places to drink started to reappear. They were something between a bar and a café and were called pivnaya (from the Russian word for beer, piva) or ryumochnaya. In addition to alcohol, they served bar snacks, including pickled vegetables, sausage sandwiches and “herring canapé” – canned herring on rye bread.

They attracted a wide-ranging clientele. A ryumochnaya was a place to step aside from the social ladder, a place where a mill worker and a government official could rub elbows – and they were often conveniently located on the way home from work, near subway stations.

Like the kabaks of old, ryumochnayas were often crowded. They didn’t have chairs or tables and their profitability relied on a quick turnover.

Today many Muscovites prefer to drink in a restaurant or bar with tables and a nice atmosphere, but there are still a few traditional ryumochnayas around.

Chebureki are the only food served at Druzhba, but alcohol is plentiful and the line to the counter in this dimly lit bar always starts at the door. And the staff doesn’t object when visitors bring their own vodka to mix with the local beer for the traditional Soviet cocktail called “yorsh.”

Aist (The Stork) is hidden between a pub and a liquor store on Slavyanskaya square, near the Kitai-Gorod subway station. By day, the surrounding district is filled with office workers and by night – with club-goers, but the patrons of “Aist” aren't young people. Here, the visitors are mostly in their 50s, and have been going to this place since the Soviet era.

Aist is probably the most expensive ryumochnaya in Moscow – for example, a shot of cognac will set you back 90 rubles (about $3) – but it is also the only one that features porcelain plates and Soviet sets of shot glasses.

The cafe retains the lazy atmosphere of the era of stagnation, when Aist was frequented by the senior government officials who worked across the square at the Central Committee of the Communist Party.

Among the dishes offered here, be sure to check out the Ostankino sausages served with green peas, a trademark of the establishment. Also be on the lookout for Tatyana Vladimirovna, a middle-aged cross-dresser famous in the area. Always drinking ash berry on cognac, Tatyana is happy to engage in conversations with visitors

It isn’t possible to talk about old-school bars in Moscow without mentioning Vtoroe Dykhanie (Second Wind). This basement located near the Novokuzentskaya metro is epic in its seediness. Down a set of stairs in Pyatnitsky Lane, under a yellow sign, Vtoroe Dykhanie is a tiny room with high iron tables, ancient dirt on the floor and ashtrays made of tin cans.

The name of the place suggests that visitors come here already well prepared to continue a drinking spree, and indeed, there’s nothing to be done except drinking – Vtoroe Dykhanie doesn’t serve any food.

This ryumochnaya doesn’t have a unique name, so it is referred to by its location at 22/2 Bolshaya Nikitskaya Street. The exact age of this place is unknown, but an old photo shows that a beerhouse was located here by at least 1914.

Since that time, the institution has welcomed people from artistic circles – the nearby Mayakovsky Theater sits across the street and the Moscow Conservatory just down the road.

In Soviet times, this ryumochnaya was one of the hot spots for Moscow hippies and singer-songwriters. Even today students from the Conservatory are among the frequent visitors during lunchtime, as the establishment serves not only drinks, but also very good Russian food.

This place has also long been prominent for its famous patrons – before the Revolution, Konstantin Stanislavsky was a frequent visitor and in the Soviet era, Vladimir Vysotsky owed the local staff money for food and drinks.

Today there is always a table with “Reserved” sign for Russian novelist Vladimir Orlov, in whose novels this ryumochnaya is mentioned many times as a cauldron for his artistic inspiration.