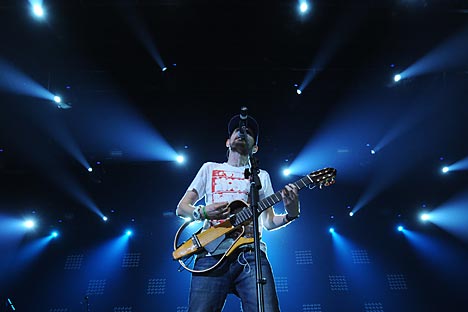 Dispersing the music via the Internet (but also doing freestyle street shows often), Noize MC was recognized by recording companies and is now doing big things on the Russian hip-hop scene. Source: ITAR-TASS

In recent years, Russian musicians have gained access to an array of opportunities offered by modern, electronic technologies of music production. But does technology really help self-expression? RBTH reports from a public discussion on the subject that took place in Moscow.

The second half of the 20th century has seen the Russian rock and popular music industry in a poor technical state, compared to Europe and the United States. During the years of the “iron curtain,” the local music scene was largely isolated, which meant Russian musicians could not get their hands on quality guitars, amplifiers and microphones. In the ‘70s and early ‘80s, Russian musicians used low-end and home-made equipment—guitars made out of parquet board, radio receivers turned into amplifiers, etc.

During the last decade, modern recording equipment, loop stations and synthesizers were made available to just about everyone. The music of contemporary Russian bands like Punk TV, EIMIC, Cheese People and Noize MC relies heavily on electronic looping and effects.

With easy access to online stores, even the most intricate gear is being made available globally—but does it really help with the development of musical talent? During an event organized in Moscow by Gibson Guitar Corporation, Gibson Executive Vice President Craig Anderton spoke about the development of innovative products such as amplifiers with built-in mixers and self-tuning guitars. After the message, which was heard by an audience of more than 150, a discussion was held between Rudolf Schenker, a founding member of The Scorpions, Andrei Ivanov, a Russian electronic musician from the Triplex project, and Russian hip-hop star Noize MC.

Noize MC (real name Ivan Alexeev) is living proof that modern technology can help every talented musician achieve success. Dispersing his music via the Internet (but also doing freestyle street shows often), Ivan was recognized by recording companies and is now doing big things on the Russian hip-hop scene. For Noize, technology is only a tool for talent: “I need only to capture my ideas for new songs, and the actual production should be left to sound engineers.” The rapper believes the main benefit of technology is “that it shortens the way from the idea to its realization.”

As for sound engineering, Andrei Ivanov, who is an accomplished electronic producer and sound designer, argued that, even with the latest hardware, you have to know your basics. For example, mixing multiple instrumental tracks into a song can only be accomplished using one’s musical experience, education and creative mind; there is no program that can effectively do it.

Commenting on a popular belief that today’s technologies can make even the worst musicians sound acceptable—i.e., auto-tune—Anderton pointed out that using technical equipment to correct mistakes goes back to the era of analog recording, when tape speed modulation was regularly used to adjust the pitch of an instrument or a voice. Still, those tools were used merely for editing, as they are today. Real talent can be neither emulated nor hidden—this was the opinion shared by both Ivanov and Anderton.

Surprisingly enough, Rudolf Schenker of The Scorpions expressed no great belief in modern computer technologies in music, stating that “technology tends to kill the real inspiration—when you dedicate your personality to music.” Still, well-known bands (including The Scorpions) need a lot of equipment to stage their shows. Speaking to RBTH after the discussion, Schenker, who has had a lot of experience touring in Russia since the ‘90s, noted that the situation with live equipment has improved drastically. “The tour of 2000 was still difficult, but, during the last 10 years, Russia stepped up to a European level of concerts,” said the musician.

It may be so for high-profiled and well-paid artists like The Scorpions, but for independent runners-up in Russian music the situation is different. An alternative point of view was presented by Vasily Shumov of the band Center, a veteran of the Russian underground rock scene who was contacted by RBTH for a short interview. Shumov argued that modern technology is slow in conquering the Russian scene: Novelties are being successfully used in studio work, but, when it comes to shows, “high costs of technology, bulkiness and the need for stage workers makes top concert technologies unavailable even for the highest-paid Russian artists.”

But, on the other hand, technology allows a single artist to function as a whole band, using loops and live montage. Such artists can tour alone, making expenses minimal by comparison to a full rock band. This way of making music is still not popular with Russian promoters, who prefer to invest in short-lived pop projects with a prepared business plan, Shumov contended. This situation leads to musical stagnation, when the attention of the public is being drawn more to technologies of production than to actual music, because of the lack of fresh material.

“Lately, I have seen a lot of news reports about bands who found money to record their albums through crowd-funding websites—and this is the essence of the news report, with nothing being said about the band’s music, as if it isn’t worth a mention anymore,” said Shumov.

Taking the musicians’ opinions as a whole, it seems that modern technologies are met in Russia with respect and knowledge. Still, the local music business does not encourage solo artists in their discoveries, and only a few live venues will consent to give the stage to young groups. Therefore, for modern technology to come into full effect, an overhaul of the Russian music industry is urgently needed.