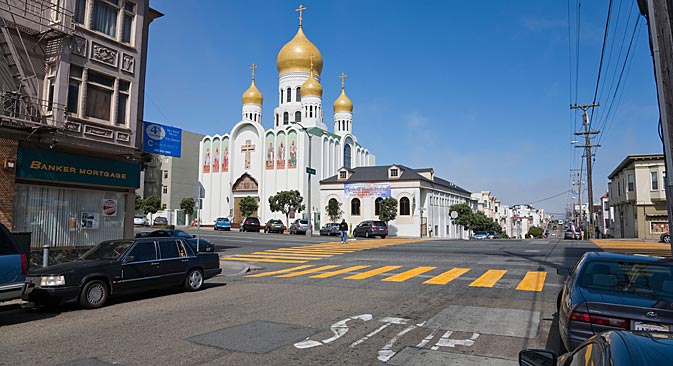 San Francisco’s Russian roots run deep, although sometimes visitors have to dig for them.

San Francisco’s Russian heritage may not be the first thing to come to mind when people speak of the city by the bay, but the area’s Russian roots run deep and include several Orthodox churches, a Museum of Russian Culture and a museum of veterans of World War I.

The first Russian Orthodox community in San Francisco was established in December 1857. The community was served by priests on Russian ships docking in San Francisco Bay until 1868, when a permanent priest was sent from Alaska. The community’s church changed names several times, but today is known is the Holy Trinity Cathedral. The current building, at 1520 Green St., was constructed in 1909, following the destruction of the original building in the 1906 earthquake. The bell tower of the Cathedral is adorned with a set of five bells donated by Emperor Alexander III in 1888.

A few blocks from the Holy Trinity Cathedral is a place called Russian Hill. During the Gold Rush era, settlers discovered a small Russian cemetery at the top of the hill. The area had been a burial ground for members of the Russian-American Company, many of whom visited the city during the 19th century. The cemetery later was removed, but the name stayed.

In 2005, the non-profit organization United Humanitarian Mission placed a plaque in both languages on the hill describing the history of the cemetery. One of the chapters of the famous book "American Road Trip" written in 1935-36 by Soviet writers Ilya Ilf and Evgeny Petrov is dedicated to Russian Hill. In the 1930s, it was populated members of the Molokans, a Russian religious sect that emigrated to the area in 1902.

Today, San Francisco’s Russian community lives mostly in the Richmond District, which is also where the largest Russian Orthodox church on the West Coast is located.

Construction on the Holy Virgin Cathedral (6210 Geary Boulevard, San Francisco, CA 94121), was completed in 1965. On Geary Street there are also a number of shops and cafes run by Russian emigrants.

During this era, Russians moved to other places on the West Coast, including Seattle and Los Angeles. But San Francisco was especially attractive because the priest of the Holy Trinity Cathedral, Vladimir Sakovich, provided assistance helping émigrés find employment and settle down.

In 1924, the first organization of Russian émigrés was formed - The Society of Russian Cadets and Veterans of WWI. Ten years later, the Society acquired its own building at 2041 Lyon Street. The building served as a social club and there were also apartments available for rent. In 1944, a military museum was opened there. Visitors are welcome even today, but by appointment only. The exhibits include 100-year-old uniforms, regiment books, old photos, honors, medals, revolvers, information about how many Cadet Corps existed in Russia and abroad.

The Initiative for Russian Culture launches its third year

The Russian Center in San Francisco is another meeting point. It is located at 2450 Sutter Street in a large neo-baroque style building. The center was founded in 1939, but it's grand opening took place on May 24, 1940. The Russian Center is home to a preschool, the Congress of Russian Americans, a Museum of Russian Culture, the publication Russian Life, a library of Russian books, Russian folk dancing classes, rhythmic gymnastic and ballet classes.

This summer the Congress of Russian Americans marked 40 years since its founding with a conference. "The aim of our organization has always been to improve Russian-American relationships. We also fight against Russophobia, which is the heritage of the Cold War. Our task is to talk about our talented compatriots who had an impact on the development of the U.S. We need to preserve our heritage, and our history, especially when in California we have a real piece of Russia such as Fort Ross", told the the president of the organization Natalie Sabelnik.

The Museum of Russian Culture is located on the second floor of the Russian Center. It was opened in 1948 with the goal of replacing an emigrant archive that had been located in Prague, but later taken to the Soviet Union. Petr Filaretovich Konstantinov, an historian and head of the Russian historical society, asked all Russian émigrés to send archival materials to San Francisco, where they would be safe from the Bolsheviks.

Margarina Menyailenko, the head archivist of the museum, described its holdings. “We’ve got 1,020 packages from 27 countries, including Argentina, Australia, Germany, and China. There are about 30 volunteers here now, who systemize materials, scan and inventory it and later put on the web,” she said. “We have the biggest independent archive of Russian emigration in the world, which is funded only by donations and not associated with any other organization. All other archives are at universities, for example the Hoover Institution at Stanford University; the Holy Trinity Orthodox Seminary at Jordanville, New York and the Bakhmeteff archive at Columbia University.”

The museum space is small, and at first glance, the exhibits seem chaotic, but there are definite gems in the collection. Made up of documents and possessions of Russian emigrants who came to the United States from the Far East, Siberia and China as well as veterans of the Russian Revolution and Baikal Cossacks, the exhibits include newspapers, books, diaries, letters, photos and military flags.

The free Cossacks: A special breed of Russian

The exhibit also contains the sign that hung outside the consulate of the Russian Empire in San Francisco with the accoutrements of tsarist power – the scepter, orb and crown – roughly painted over. The sign was bought as a garage sale.

The museum collection also includes the Ipatieff bomb, created by chemist Vladimir Nikolaevich Ipatieff (1867-1952), who emigrated into the U.S. in 1937. He was the brother of Nikolai Ipatieff, who owned the infamous Ipatieff house in Yekaterinburg, where the last Russian emperor, Nicholas II, and his family were murdered.

Vladimir Ipatieff’s work on catalysis under high pressure made him famous as a chemist; for his reactions he used massive bombs made of steel – the Ipatieff bombs. In the U.S., Ipatieff discovered alternative fuel mixtures and procedures that greatly enhanced engine performance. Rumor has it that after changing to the Ipatieff fuel mixtures, the British Royal Air Force was able to outperform the best German planes for the first time.

There is also one exhibit from Silicon Valley – an Ampex recorder, made by the company of Alexander Mikhailovich Ponyatoff (1892-1980). He founded the company Ampex in 1944, using his initials, A.M.P., plus "ex" for "excellence" to create the name. In 1956, Ampex engineers created the world's first videotape recorder the VR-1000. This recorder made it possible for programs broadcast on the East Coast to be released in time-delayed broadcast for the West Coast.

One of the oldest museum volunteers is 90-year-old Georgy Vasilievich Kumansky. Born in 1923 in Vilnus (now the capital of Lithuania), he moved to San Francisco in 1963 from Argentina: “I left in this archive 45 boxes, which I collected from emigrants of the first wave (1917-1922), who died alone and didn’t have without kids. I would felt really sad and sorry if everything would be lost. I’m Russian, I’m Orthodox, this history means a lot to me.”