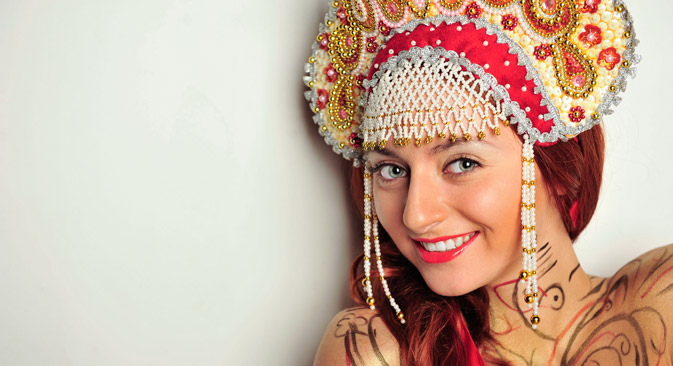 Want to surprise your friends with a Russian costume? Try the kokoshnik. Source: Alamy / Legion Media

So you are tired of dressing up like the Joker, Batman or the Flying Spaghetti Monster and want something new for your Halloween costume. My advice is as simple and straightforward as a shot of vodka: dress like a Russian.

This isn't going to be a step-by-step guide on how to craft a genuine ‘kokoshnik’ (the traditional had worn by Russian women), rather some inspiration for how to bring Russian style to your Halloween celebration.

Like most things, creating a Russian Halloween costume can be either simple or complicated.

If you don’t have enough time for knitting, crafting or duck taping, you can be as stereotypical  as your imagination and common sense allow. The easiest costume would be to buy an Ovechkin hockey jersey and put on a fur hat.

You can also start preparing in advance and grow a genuine beard with moustache – as you know, Russians normally use axes as shaves, so they usually take a long time between shaves.

You can also take an empty bottle of vodka, fill it with still water and impress everyone with your outstanding drinking skills: drink right from the bottle and do no less than three or four big gulps. Warning: don’t try this with a bottle of actual vodka, even Russians don’t go to such extremes on Halloween.

If you want to show your passion towards the ideals of communism, you can just dress red: pants, shirt, hat, everything. Or you can put on clothes of any color, but with a big red star in the very center.

A yellow sickle and hammer logo can also be placed anywhere on your costume to add that unforgettable “commie” touch. Another suggestion: make a cute little papier mache nuclear warhead and threaten every oncoming capitalist with it.

A complicated Russian costume will require more creativity. To begin with, you could try impersonating something Russian. A bear costume? That’s too easy – you can leave it for the kids. Instead, try to dress like a White Russian.

Not that White Russian Beauty costume – the actual cocktail. Put on a dress with two layers of traditional unstirred White Russian colors and don’t forget to attach a big fake straw to your head. A pancake with caviar will also work as a costume. Use dyed blankets for the pancake and half-inflated red or black balloons for caviar.

You can also dress up like a babushka or a nesting Russian doll. There’s actually no difference between these two, because typical Russian babushka (grandmother) looks like a nesting doll. You might have a hard time dressing like a satellite (yes, the Russian word sputnik just means satellite), but you could try putting on a space-suit and saying “Poy-ekhali” (“Let’s go!”) repeatedly. Everybody will instantly recognize Yuri Gagarin – the first man in space – in you.

Dressing like a Russian spy can also be a good option. Since Anna Chapman has recently become the most recognizable Russian spy, I would suggest you use a red wig and some sort of slinky sexy costume.

In order not to be confused with a spy from any other country you can add a small chevron with a Russian flag or sickle and hammer - again. However, I should mention that real spies don’t add such obvious details to their slinky sexy wardrobes.

Now for some serious stuff. If you’re into history and ethnic costumes, dressing like a Russian peasant from the 17th century is your choice – not only will you demonstrate your exquisite taste, but also the costume itself is easy to make.

This Halloween: A Russian guide to scary movies

Take a simple white long-sleeved shirt, tear its collar a little bit on the left side of the chest (not in the center – it’s important!) and sew red stripes (with some ornament or without it) to the edges of the cut.

You can also add red stripes to the hem and sleeves of the shirt, but it’s optional. Take a wide red stripe (ideally with the tassels) which will work as a belt. Put on simple black pants, high black boots and a peaked cap and you’re done.

And here comes the question of being politically correct – will your Russian friends be offended if you dress like a Russian? The answer is no: although normally every single Russian hates all the Western stereotypes about vodka and bears, we secretly love when foreigners show their interest in our country – dressing like a Russian will actually exalt you in the eyes of your Russian friends.