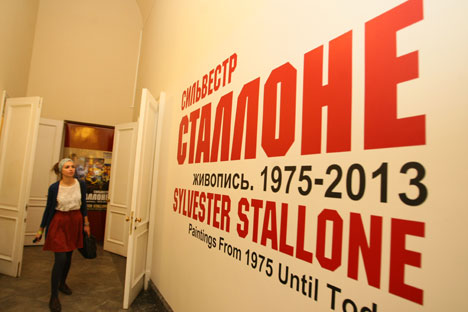 Sylvester Stallone—known around the world for his roles in the films “Rambo” and “Rocky”—is also a talented artist, according to experts at The State Russian Museum, where an exhibition of his paintings recently opened.

Hundreds of people stood in line to get into The Mikhailovsky Castle in St. Petersburg, where the opening of Sylvester Stallone’s exhibition was being held, organized by The State Russian Museum.

The artist himself came from the United States to greet the public and to share his own view on art and painting. He has been painting for more than 40 years, but it is only recently that he has decided to show his work to the public.

In 2011, an exhibition of Stallone’s work was held at the Gmurzynska Gallery in St. Moritz, Switzerland. The exhibition at The Russian Museum is the first exhibition of his art work in Russia, where 36 of his pieces from several collections are represented.

Stallone began painting in the late 1960s, when he was a student at the Academy of Dramatic Arts in Miami and seriously considered becoming an artist. While Stallone would later become a professional actor, he continued to paint “for himself” while filming.

“I love art more than anything in the world — except my family, of course,” said the artist at the press-conference held an hour before the opening. He explained that painting is the best way to express himself and all the emotions and thoughts he has inside.

The majority of Stallone’s paintings are inspired by his experiences both in real life and on film.

The earliest of these works is “In Search of Rocky” (1974), which was created even before the script for this celebrated film was written. Stallone’s personal struggles are reflected in, for example, the tragic canvas “Death of a Friend” (1977).

This work was created after the death of his manager, Jane Oliver. The painting “Love You Baby” (1996) is dedicated to Jennifer Flavin, who, in 1997, became Stallone’s third wife.

“If I should give a name to the whole exhibition now, I would name it ‘A Train from the Valley to the Mountain,’” Stallone said.

The idea of holding an exhibition of Stallone’s work came to The Russian Museum from Gmurzynska Gallery, which sponsored the project. “We get money from the state for one or two exhibitions a year only.

Luckily, we have sponsors,” Vladimir Gusev, the director for The State Russian Museum said. “But this exhibition is serious art; this is not about the name of the artist. And today we have not only a new exhibition’s opening — today we discover a new artist.”

Yevgenia Petrova, the executive director for The State Russian Museum, noted that only amateurs would see just the name of the artist on the exhibition, while fine art experts and those who really understand art would recognize the real art here. She added that, if these pictures had been associated with the name of a different artist, the museum would have still made the exhibition happen.

The exhibition has caused a lot of commotion in Russia. While many were dying to see the paintings and the artist himself, the Communist Party of Russia claimed that it is unethical to open this exhibition in St. Petersburg. According to them, Stallone’s Rambo character killed Russian soldiers in the film and will always be a symbol of the Cold War.

At the opening of the exhibition, Sylvester Stallone commented on the incident, saying that he and his art are both all about challenges, and such a reaction from the political party, for example, is quite normal for what he does. The artist also mentioned that there is Russian blood in him.

“My great grandma comes from Odessa, so this mix of Italian, French and Russian blood influenced my art, of course,” Stallone said.

The exhibition will be open through the middle of January 2014. Steve Caron, the general partner at ISIC Russia and Sindbad, shared his impressions of the event: “I was amazed by the turnout of visitors today, and, of course, I was pleasantly surprised by another channel of Sylvester Stallone’s creativity.”

Stallone left St. Petersburg right after the opening, but the actor promised to return with his family, as the northern city left a great impression on him. In addition, Stallone was invited to the opening of an exhibition of his favorite Russian artist, Kazimir Malevich, which will take place in December 2013.