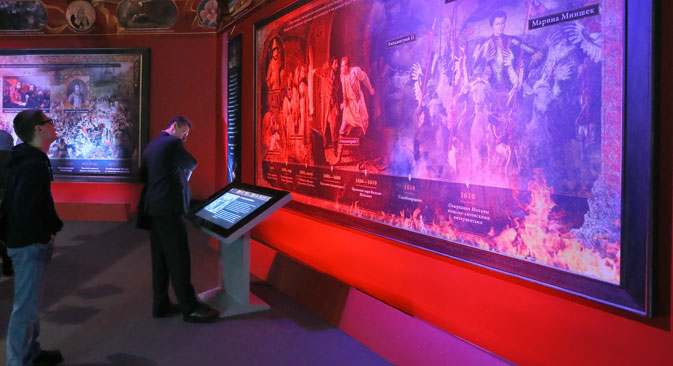 "My History. The Romanovs", an exhibition to mark the 400th anniversary of the Russian imperial dynasty, opened in Moscow Manege this week. It features 3D installations, animated collages, and interactive content.

More than 15,000 visitors crowded the halls of the Moscow Manage exhibition hall on the opening day of a multimedia collection that uses cutting-edge technology to depict the history of the Golden Age of Russian culture.

Organizers of the “My History. The Romanovs” timed the first day to fall on National Unity Day, and the line to enter the hall stretched across Moscow’s Manezhnaya Square. Inside the hall, school children, off from classes for the public holiday, ran in front of a huge screen depicting all of the Romanovs, while old ladies navigated the touchscreen panels. Elsewhere groups of military cadets, priests, and seminary students roamed the halls.

Presenting the Romanovs: Their Lives in Art and Objects

"My History. The Romanovs" is being billed as an educational event and an excellent teaching aid for high school history lessons of Russia. Little wonder, then, that up to 35 school excursions are planned for every day of the exhibition. Students will be able to test their newly acquired knowledge with the help of iPad-based quizzes available from special stands.

"We modern people have no idea of the origin of the simplest things in our life. This exhibition teaches a lot about such things,” said Alexander Myasnikov, the exhibition's history adviser.

“When did roses first arrive in Russia? Under the first Romanov, Michael, who introduced the flower to this country. What about strawberries? These were introduced by his son Alexis, who had a green thumb just like his father. The first telephone? Under Alexander III, can you imagine that? He often called St. Petersburg from [the royal palace in] Gatchina.”

It was also Alexander III that gave pearl barley porridge its name, as he believed it to be the best meal. Sunflower oil was invented in Russia under Nicholas I. This is why the sunflower is known as a Russian flower all over the world, although in actual fact it originates from America, Myasnikov added.

Romanov Dynasty through the eyes of Russian artists

"It was under the Romanovs that Russia established its first air force and had the [Sikorsky] Ilya Muromets airplane. Everyone remembers the Wright brothers as the pioneers of flight, but [Alexander] Mozhaysky took off in his aircraft in Krasnoye Selo 20 years ahead of them! All of history is filled with mysteries. One of the aims of this exhibition is to reveal these mysteries and demonstrate that history is not boring at all,” he said.

The story of the Romanovs is presented with the help of 3D installations and animated collages, light boxes and film screens. The interactive part immerses visitors in history. Each of the 21 exhibition halls is devoted to one representative of the dynasty.

Touchscreen tables with illustrations list the key historic events of each period and supply additional entertaining factoids. There are special halls giving a detailed account of Russia's religious, cultural and scientific life under the Romanovs, with looped short films that consist of computer-treated paintings commissioned or dedicated to them during the reign of the Romanovs.

Several 3D panels produce vivid pictures of the past: the Time of Troubles is represented by a realistically burning Kremlin; the imperial chambers of the 17th century are demonstrated by way of a masterfully backlit installation; interactive screens depict scenes of military operations. The central hall is taken up by a giant screen showing the images of all the Romanovs at once. 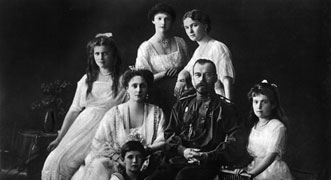 The exhibition features personal belongings of the first and last Romanovs: Michael I's sceptre and Nicholas II's diary. Theotokos Feodorovskaya, the patron icon of the dynasty, has been specially brought as an exhibit from Kostroma's Ipatiev Monastery.

The Kostroma icon was brought to the Manege courtesy of the Moscow Patriarchate, the city administration, and the Russian Ministry of Culture: all three are among the exhibition organizers. Patriarch Kirill lit candles before the icon and took a tour with Putin through the halls in the company of the exhibition ideologist Archimandrite Tikhon.

The exhibition is on until November 12.