The evolution of Soviet revolution fashion 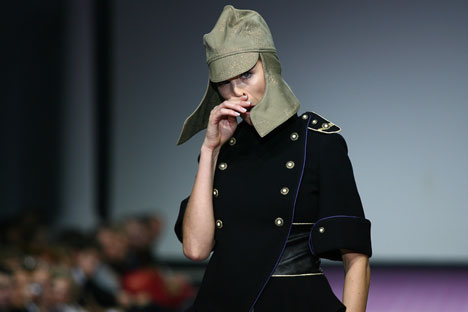 A Budenovka hat is trendy these days. Source: ITAR-TASS

The fashion for revolution, which took the world by storm almost a century ago, is reflected not only in leftist political views or mass rallies, but in revolutionary fashion as well. Indeed, revolution fashion has its own tradition and logic.

What did people wear in Russia after deposing the Tsarist regime and during the civil war that followed the revolution? They wore something wild, outrageously eclectic, and wonderful.

Some were marching enthusiastically towards Communism; others were mourning the bygone era. All of them had been wrenched violently away from the old way of life. The new ways had yet to replace the old.

The workers and peasants who became fighters of the Red Army in February 1918 were a motley and colorful crew. They joined the red banners in whatever outfits they could afford when the war came.

The new Bolshevik government was too cash strapped to provide uniforms for its army. Soldiers wore plain civilian clothes with only a red armband to distinguish themselves from the crowd. When there was no red armband, simple red items of clothing sufficed.

A Red Army soldier described his unit arriving in town: "We’ve just had a veritable Red Brigade pass through the city. We dressed in red from head to heel with white high boots, looking for all the world like some new tribe of redskins.”

No two men in the Red Army units were dressed in quite the same way. One would wear a heavy army greatcoat with a Cossack-style tall sheepskin hat, red breeches, and a revolver tucked behind the waste band. Another would sport a well-worn leather jacket on top of a striped sailor’s vest, Navy-style flared trousers, and a sailor’s hat with the ribbons torn off.

Some of the Red Army units were outfitted in the Tsarist uniforms seized from the imperial Russian army's depots. As a result, the Red Army cavalry wore the same uniforms as the deposed Tsar’s own mounted regiments. On one occasion, Red Army infantry chased a newly arrived Red Army unit out of a Red-held town after mistaking them for the Whites.

Meanwhile, members of the White Guard, which fought for the Tsar, also tended to look more like highwaymen than representatives of His Imperial Majesty's forces. The rich farmers, who were so loathed by the Communists, preferred simple farmer’s shirts, loose breeches, felt boots, and sheepskin jackets.

The former imperial soldiers simply patched up their old uniforms as best they could. Shortages were so widespread that even insignia had to be drawn in black ink right on the fabric of the coats and jackets.

The Bolshevik government fully realized that the Red Army, as well as the whole country, needed new symbols. In 1918 it announced a competition for a new Army and Navy uniform design. That is when the Red Army got its now legendary looks: the Budenovka peaked hats with long ear flaps styled to resemble previous era Russian helmets, and long overcoats with broad lapels, similar to the kaftan outfits worn by regiments of Russian Streltsy guards (the units of Russian guardsmen, literally "shooters") before the 18th century.

Some historians, however, offer a different account of events. They insist that the distinctive uniforms that later came to be associated with the Red Army were actually designed by the famous Russian painters Vasnetsov and Korovin on the imperial government's orders.

These uniforms were made in large numbers just before the Tsar was deposed. The Bolsheviks simply seized these uniforms when they took over the imperial army’s warehouses.

Others claim the uniforms were commissioned by the imperial Russian government especially for the victory parade, which the Tsar hoped to stage in Berlin some time in 1917. The Russian army and its foreign allies had come very close to defeating the Germans in World War I, just before the Bolshevik revolution.

That alternative account actually sounds fairly plausible, especially since Vasnetsov really did use the imagery of legendary Russian heroes in his paintings and patriotic posters created during World War I.

Instead of the two-headed eagle, the symbol of the Russian Empire, the Budenovka hats bore a five-pointed star of different colors for the different armed services (dark blue for cavalry, light blue for the air force, orange for artillery, etc.) The result was very civilized and stylish, and Budenovka soon became the Red Army’s most recognized symbol.

Decades later Budenovka became an iconic design, which many fashionistas often wear with civilian trainers, jeans, and fleece tops. The sentiment expressed by such a fashion choice ranges from patriotism and nostalgia, to protest against consumerism.