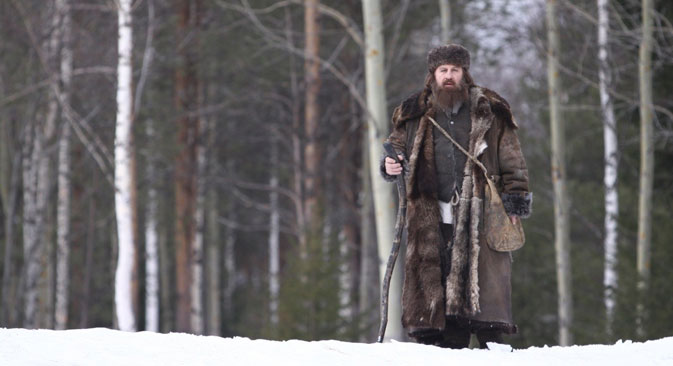 The French actor Gerard Depardieu, who recently became a Russian citizen, stars in a new version of a movie about one of the Russian Empire’s most mysterious figures.

Gerard Depardieu again stars as Rasputin in a new version of a previously produced French adaptation of the story of one of the most notorious characters in Russian history.

Irakliy Kvirikadze, who admits that his film is very different and quintessentially Russian, directed the Russian version of “Rasputin.”

The French first saw Depardieu in the role of Rasputin back in December 2011, in a film directed by Josee Dayan that ran as a television series. The new film has been reworked as a full-length Russian feature will containing Russian and French actors.

The film was shot in a record-short time of only 26 days. The audience of the first screening of “Rasputin” in Paris consisted of specially invited descendants of Russian émigrés. It was then shown on TV on Christmas. The plan was to release the film in Russia in March 2012, after the presidential election, but apparently something went wrong.

Depardieu says that Vladimir Putin has seen the French version of the film.

“I had several meetings with Putin, who served as prime minister at the time. I gave him the script and said, ‘You must read it and tell us what you like and what you don't like about it'. He helped us a lot," the actor said.

Voiced by Sergey Garmash, Depardieu speaks in a very heartfelt way about God and sin. Rasputin's native village in Siberia is the very picture of the Russian hinterland. The characters keep making the cross signs and/or drinking heavily, while Depardieu, in his huge unbuttoned fur coat, looks like a bear.

Putin is said to have granted Depardieu Russian citizenship as a result of his role in “Rasputin.”

Dayan and Depardieu intend to continue the Russian series, which could include film adaptations of “The Captain’s Daughter,” “The Brothers Karamazov,” and other great pieces of Russian literature.

The following are excerpts to an interview with Depardieu:

Gerard Depardieu: At some point I felt a certain closeness to that figure. Both of my grandmothers were clairvoyants and hypnotists. I have seen lots of Rasputins in my life in countries all over the world, under different circumstances and in different places.

But at the same time, Rasputin is a very Russian and idealistic figure. He lived in turbulent times, when almost all the European monarchies fell, when alliances broke up, and when countries were betraying each other.

I.: What other Russian characters hold attraction for you?

G.D.: There are plenty of such characters in works by Dostoyevsky, Gogol, and Chekhov. I am very interested in the characters of Porfiry Petrovich, the father Karamazov, and Prince Myshkin.

I.: Do you believe that a well-groomed European can play a craggy Russian peasant?

G.D.: It’s not a question of playing a Russian. It’s a question of playing a historical figure. It’s the same story in every other kind of art or sport. Are there any nationalities there? The actor’s country of origin doesn’t matter when he is in character. When Vladimir Vysotsky came to perform in France, the audience did not come to see him because he was Russian. They came to see his performance and to listen to his songs.

I.: You travel a lot all over Russia. Coming from Europe, you probably find many things you see in the Russian hinterlands rather unusual?

G.D.: I like meeting new people in Russia and spending time with them. Also, I like the countryside. There is no pageantry and showiness there, and everything is simple. I was born in a small town. Incidentally, the first time I came to Russia was 25 years ago, and I have been coming back quite often.

At this point in my life I felt that I needed to stay here for longer. I have been given a huge honor; I now hold a Russian passport, and I am proud of it. There has been too much coverage of this in the media, but I was not looking for PR.

I.: There have been many reports that you plan to open a restaurant in Moscow. How do you plan to attract customers?

G.D.: I already have several restaurants in Paris. I have never asked myself the question of what a restaurant must look like to be liked. I just wanted to open a place that serves good food and is staffed by good people.

View the gallery: The best Stalin, Lenin and Rasputin performed by foreign stars

My restaurants are always full. In Russia, if I actually decide to go for it, I will do everything exactly the way I did it in France. The most important thing is what’s on the plate, and the people working in the kitchen and serving customers.

It is important for me to know what's on a plate in front of me, where the food comes from, and how it was made. I don't mean organic food, I just mean healthy food: vegetables, meat, wine, etc. I like simple cuisine, with traditional dishes.

In Russia, I would like to work with meat. I have seen some excellent farms here, but I believe there is room for improvement in the way meat is aged and cut.