Five cultural events for the week of Nov.18–24 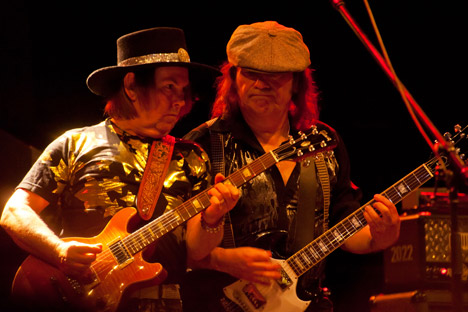 Nostalgic rock concert, Beethoven at the whole in Moscow, performance anthology in the Jewish Museum.

Slade, a legendary British band, will give two concerts in Russia, one in Moscow’s Crocus City Hall and one in St. Petersburg’s Lensoveta Culture Center.

The glam and punk rock stars toped the pop charts in the 1970s, but the band broke up in the 1990s, when the vocalist, bass player, and main songwriters, left. Two remaining members continued concert activities with new musicians under the old brand. All this, however, does not prevent the Russian public, "falling short" of live rock concerts at their time because of  "iron curtains," from being nostalgic about and taking pleasure in Slade classic repertoire at this week’s concert.

The festival is one of the largest students film festivals in the world, with more than 200 films from 25 countries. They include Argentina, Belgium, England, France, Germany, Greece, China, Indonesia, Mexico, Spain, and the United States. The festival will be held in 20 Russian cities.

Nine symphonies by Beethoven in 4 days — Vienna Symphonic Orchestra comes to Moscow under the guidance of Christian Thielemann, a German conductor. "No such musical event has been held in Russia ever. Vienna philharmonic orchestra is the best orchestra in the world, and listening to all Beethoven symphonies is a rare opportunity one should never miss", said Irina Nikitina, the Musical Olympus Foundation president. Symphony No. 9, written by the already deaf composer, will be played.

The Vienna orchestra was founded in 1842, making it the oldest in Europe. Its conductor's deck has been in the hands of such symphonic music titans as Herbert von Karajan, Leonard Bernstein and others.

Such performances will take place within Dyagilev PS IV International Festival. In addition, a number of other events will be held including “Theatre and Fashion: Arts' Dialogue” scientific conference. While Sheremetev Palace will host “Style on the Stage: Elegance Art” exhibition starting on November 21. The festival is named after Sergei Dyagilev, a Russian impresario, the founder and inspirer of legendary Russian Seasons, a European ballet theatrical enterprise that opened the entire galaxy of great dancers, choreographers and artists of the world, including Igor Stravinsky, Waclaw Nizynski, George Balanchine, Leon Bakst, Alexandre Benois.

“Performance now: Anthology of the 2000s” exhibition starts at the Jewish Museum and Tolerance Center in Moscow. That is a large-scale, international project under the oversight of RoseLee Goldberg, a reputed American historian, critic and curator, the author of “Performance Art: From Futurism to the Present” book.

"Performance becomes a major visual culture type in the XXI century, owing to such genre synthetic character and complexity, an artist uses and combines various media in order to embody his conception as fully as possible,” Goldberg said. Spectators will see performances by such well-known artists as Marina Abramovic, Claire Fontaine, Allora and Casaldia, Santiago Sierra, Clifford Owens, Yael Bartana, Guy Ber-Ner and others.